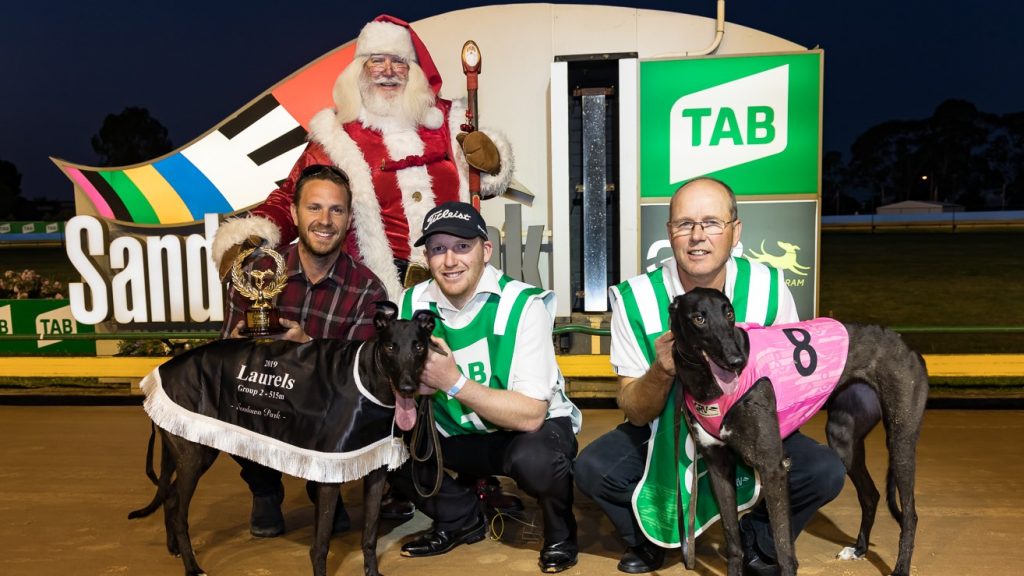 The South Australian bred sprinter was sent to the boxes a firm $1.70 favourite having drawn box 1 after recording the fastest heat win the previous Sunday. And it was an easy watch for those who took the short quote – Oakvale Beauty began fairly but was given plenty of room to drive forward and stalk early leader Extra Speed. She railed through to take the lead entering the back straight and quickly assumed control of the $50,000 to the winner event, racing to a four length win in a race record 29.33.

“It’s very exciting!” said owner Nathan Wilson, who made the trip across from South Australia for the final.

“She doesn’t know how to run a bad race, she’s as honest as they come. She’s been like that since day dot, always putting in 100%. She does a lot of things right and drawing the red box – it was exactly where we wanted to be.”

“She loves railing. When she drew the red I was fairly confident and she used it to perfection through the first corner tonight,” he said.

Amazingly, it was her eighth victory from as many starts wearing the red vest.

“If you can get a career getting eight reds you’ve done pretty well and she’s done it in 27 starts. She’s been pretty lucky with red boxes, but when she first came over her she kept getting 6’s and I was starting to get cranky. But now I’m pretty happy.”

Oakvale Beauty emerged as a greyhound to follow when winning the group 3 South Australian Oaks in September. She was unplaced in her first two starts in Victoria, however soon rediscovered her winning form, qualifying for the TAB Melbourne Cup and running an unlucky fourth just a length behind winner Whiskey Riot.

“She really surprised me in the Melbourne Cup, she showed me she could mix it with the best dogs.

“It’s a big step up coming from South Australia in restricted age racing, to come over and do what she did in the Melbourne Cup was just a terrific effort.”

Origami Angel ran second for Jeff’s partner Angela Langton who won the 2018 Laurels with Circle Of Dreams, while Welsly Bale finished third for Heather Collins who won the race in 2014.

The victory also completes a remarkable achievement for the Britton family, with Jeff joining Angela, his brother Robert, sister Linda, and father Alan as winners of the age restricted classic.