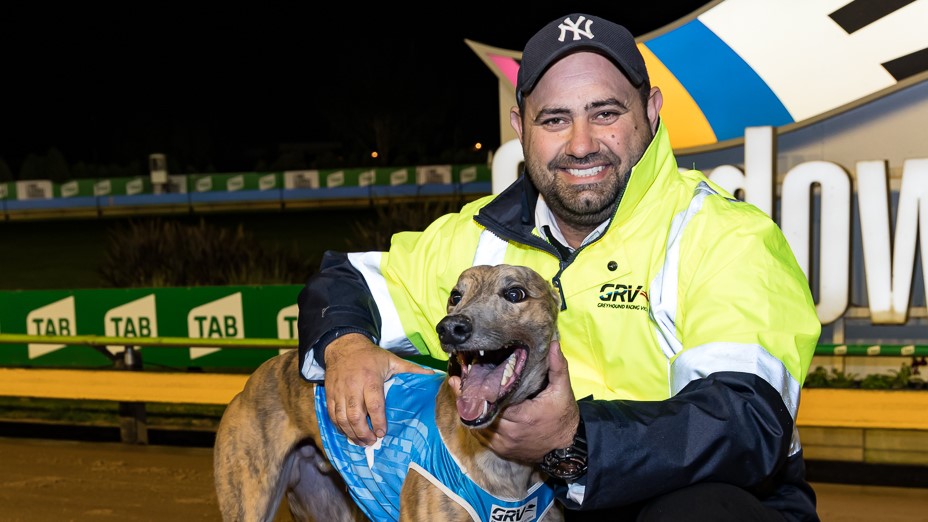 Whiskey is ready to Riot

The three-time group 1 place getters was one of the big winners following the box draw with his price to win the Cup being slashed from $21 to $9. He rounded out his Cup preparations in last Thursday night’s Shootout, where he led for all but the last few strides before being caught by equal Cup favourite Hooked On Scotch. Despite narrowly missing the $25,000 winners cheque, Azzopardi was beaming knowing he has his charge in perfect condition.

“He’s ready to rock and roll, we couldn’t get him any better,” he said.

“He pulled up terrific, he’s just thriving and I’m sure he’ll do his best. I’m just hoping he avoids the red (Courting), that’s all.”

Whiskey Riot’s time of 29.22 in the Shootout was almost a length faster than his previous best time at the circuit. It was also the second fastest time recorded on the night, satisfying Azzopardi’s belief that Whiskey Riot is a serious challenger for the world’s greatest greyhound race.

“It was a good lead up to the Cup heats. There were a lot of good dogs went around there on Thursday so that tells me with that time he’s right up there.

“His early speed is his biggest asset. He’s a very reliable beginner so you know he’s going to be 1-2-3 early, it’s very rare he misses it. He’s just a real professional dog, he goes about his business, it’s not often you don’t see his best.”

If successful in his heat, Whiskey Riot would be Azzopardi’s third TAB Melbourne Cup finalist after Zambora Brockie made the final in 2016 and Raw Ability the following year, and he was also part of the celebrations when his good mate Jason Mackay won the race in 2016 with Ando’s Mac. Having been so close with two greyhound he regarded as among the best he’s ever trained, Azzopardi is acutely aware of how hard it is to win the Cup – and what it would mean if he were to win it.

“It would meant the world to me really, it’s the race every trainer dreams to win,” he continued.

“To be honest, it’s not the prize money – the prize money is great and would certainly help – but as a trainer I don’t think you’re fulfilled until you win one. I’ve been fortunate to win a lot of good races over the years, but the Melbourne Cup is at the top of the tree.”

Seal The Deal (race 9) will also contest Friday night’s heats, but despite his abundant ability, Azzopardi is cautious about his chances.

“I was a bit disappointed in his run last week (where he ran third to Weblec Ace in a Cup Prelude).

“He did his old trick of waiting until the lids opened. He’s the faster dog out of the two – I’ve got no doubt he has the ability to take it out – but he can let you down. I’m happy with the box and if he jumps like he did at Shepparton he’ll be hard to beat, but it’s hard to say he’s going to do that. He’s a great chaser, but he’s a little bit gun shy at the start.”

He was more optimistic about the chances of last start group 1 Topgun Stayers runner up Just Terms in a heat of the Bold Trease (race 4).

“She trialled enormous the other day, she’ll be hard to beat I reckon if she can get a crack at them early.”

The winner of each TAB Melbourne Cup heat will progress to the $630,000 group 1 final on Friday 29 November, while the winner and runner up of each heat of the Bold Trease will also progress to the final to be run on the same night.