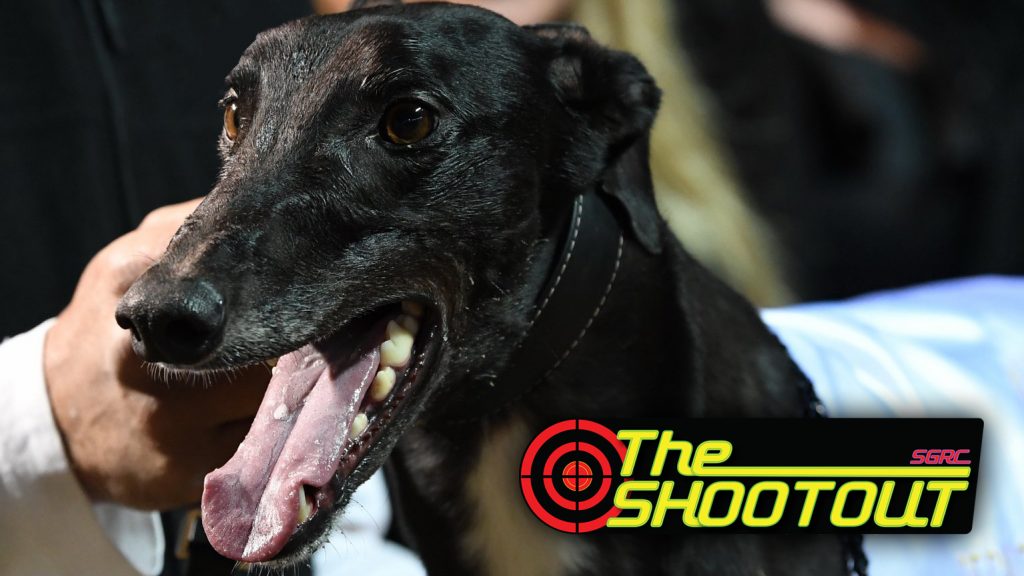 
Hooked On Scotch will aim to add the $25,000 winner-takes-all Shootout to his already impressive resume when he jumps as favourite in Thursday night’s four dog speed spectacular.

But he will need to be at the peak of his powers in the race dubbed the ‘Speed Championship of Australia’ with three brilliant greyhounds primed to take the title.

Hooked On Scotch was an automatic qualifier by virtue of his State of Origin win at Angle Park in September, but would have been a walk up starter regardless given his record on the track. He burst onto the scene with a devastating 29.087 gallop on his Sandown debut, and franked that form with a win in the Speed Star match race series at career start number eight. His time of 29.113 was breathtaking given the conditions on the night and confirmed his standing as one of the fastest greyhounds on the planet.

Good Odds Harada makes the field on the back of his scintillating 29.34 win in the TAB Million Dollar Chase. Defeating an elite field of sprinters, the time represented his fifth best of night win at Wentworth Park and trainer Frank Hurst will be hoping that his millionaire chaser can replicate his Sydney form on his Sandown Park debut. History is against Good Odds Harada on Thursday night however – no New South Wales trained greyhound has won the Shootout since Go Wild Teddy claimed victory in the 2000 edition of the race.

Whisky Riot ran third in Saturday night’s Topgun – his third placing at the sport’s highest level – but it was his brilliant 29.255 victory at the circuit in August that secured his berth in the race. He’ll have to overcome a box 1 hoodoo in the race with just four Shootout champions donning the red vest and none since 2007.

Mepunga Maggie rounds out the field, and while she may not have grabbed the headlines of her esteemed rivals, her recent form is exemplary. She has two TAB Melbourne Cup Preludes under her belt – one in a best of night 29.653 in very heavy conditions, the other in 29.262. Mepunga Maggie is aiming to become just the second female greyhound to win the race after Australian Hall of Famer and race record holder Xylia Allen.

The reserves are Western Envoy and Pindari Express. The reserves will be randomly allocated in the event of a scratching.

The Shootout headlines a stellar card of racing which also includes the final round of TAB Melbourne Cup Preludes. Among the greyhounds rounding out their preparations for the TAB Melbourne Cup are Flynn, Simon Told Helen, Hasten Slowly, Shima Shine, Often Imitated, Who Told Stevie, Black Opium, Seal The Deal, Pindari Express and Good Odds Buddy.

The winner of each Prelude (as well as all Shootout runners) will earn an exemption into the TAB Melbourne Cup heats on Friday 22 November with the final of the world’s greatest greyhound race to be run on Friday 29 November.