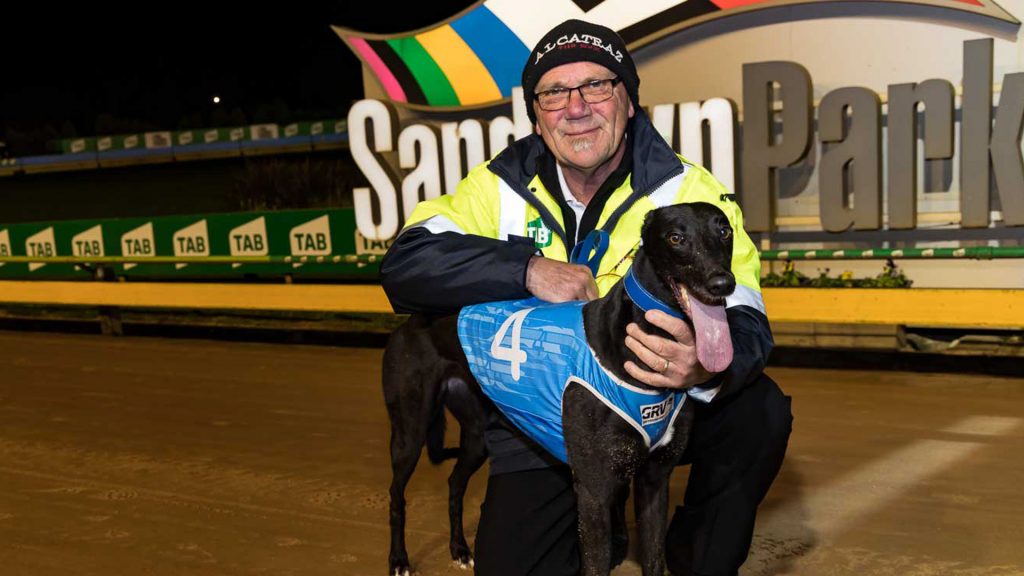 It was the Steve White trained sprinter’s first victory at Sandown Park since claiming the sweepstakes event in April, and came as a big relief to the Gippsland based trainer.

“I just had to step her up,” said White.

“She was in the Free-For-All company (over 500m) and was just getting knocked around a little bit. Her run homes in the Free-For-All’s were pretty good, and I’d given her two trials over 600m and she gave every indication that she was going to run it.

“In the trials she ran quick splits but tonight she didn’t, she was more down to the line so it’s a good sign to me anyway.”

While pleased with Tauwitchere’s run, White was cautious about the chances of his kennel star Sennachie in Sunday’s Speed Star match race series.

Sennachie is Australia’s highest ranked greyhound after brilliantly claiming two group 1 titles through winter however he hasn’t raced since his success in the Maturity in July. He is the second fastest qualifier for the Speed Star after trialling 29.245 in August, however a subsequent minor injury hiccup has kept him on the sidelines since.

White will use the Speed Star as a stepping stone towards a number of features later in the spring.

“He’s not going to be right on his top for Sunday, it was just sort of a last minute decision (to enter him),” he said.

“I’m not too fussed whether he wins or whether he doesn’t. The whole thing is just to move on to the State of Origin and the Adelaide Cup, then freshen back up for the Top Gun and Melbourne Cup.

“I’ll be happy to just go around injury free on Sunday. He’s probably up to about 90% where I want him – I really want him at his peak when I get to Adelaide.”

The Speed Star brings together 40 of the country’s fastest greyhounds in a series of two-dog match races with $190,000 in prize money up for grabs.

The first of 20 match races will jump at 5.08pm with full coverage on Sky Racing 2 – open and free to all Foxtel subscribers – featuring form experts Jason Lincoln and Jason Adams bringing you the latest from the track.

Tauwitchere storms to her maiden victory over the middle distance