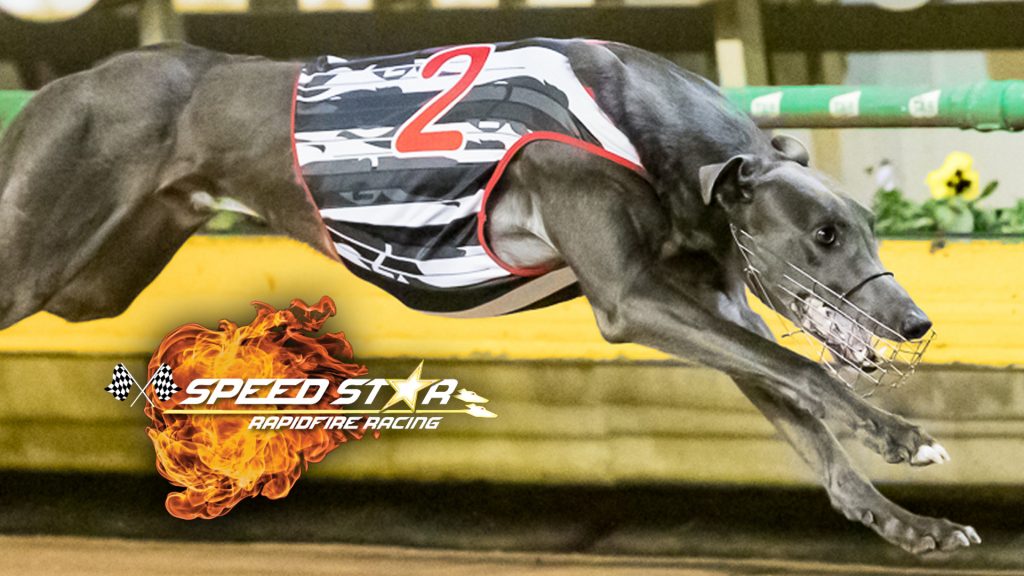 Hooked On Scotch and Feral Franky have been installed equal favourites for the Speed Star match race series on Sunday.

Despite being the youngest and least experienced runner in the field, Hooked On Scotch was the fastest qualifier for the series following his brilliant 29.087 victory at just his fifth race start on 18 August. If he can run the fastest time of the night, he would become the first top seeded greyhound to take out the series since Smart Missile claimed the inaugural Speed Star and would give Jason and Seona Thompson their fourth success in event.

Feral Franky has taken the greyhound racing world by storm in recent months and enters the match race following his stunning eight nine length victory in a Million Dollar Chase Regional Final in which he slashed eight lengths off the Gunnedah track record.

Sennachie is also $1.15 in his match (against Black Signature) and is the on the second line of betting in the overall market at $3.80. The Albion Park track record holder hasn’t been seen on course since winning the group 1 Maturity (in which Feral Franky ran third) in July, qualifying for the series with a 29.245 trial on 25 August.

The 20 match race card will kick off with a series over 595m, with Spring Bridge opening the $2.80 favourite to run the fastest time overall. Spring Bridge turned in a dazzling trial despite the trying conditions during the final qualification session last Sunday, running 34.085.

He’ll meet Blue Striker who will contest his third Speed Star series, with Spring Bridge the $1.25 favourite to prevail in their match.

Neo Cleo will step back up to the distance for the first time since running second in the group 2 McKenna Memorial in July and is the $3.80 second elect for the series. The defending champion over 595m in this format will start favourite ($1.20) in her match against Rockstar Prince ($4.60).

Bookmakers can’t separate True Detective and Shorino ($1.90 each) in what is shaping as one of the most intriguing matches of the evening, while Apex Within ($1.40) and Extreme Justice ($3) round out the middle distance series.

For the stayers, all eyes will be on Tornado Tears as he eyes not only a third Speed Star title (he has won two series over 595m previously), but a possible tilt at the 715m track record.

Already a holder of seven of the 13 fastest times recorded over the trip, Tornado Tears stormed into top position on the 715m leaderboard with a barnstorming 41.345 trial on 2 September – the fastest solo trial ever recorded for the distance. ‘Batman’ is $1.04 to win his match against Han Solo ($11) and $1.10 to win the series.

There will also be plenty of interest in the two 515m consolation events, which has already seen a big push for Rampaging (pictured) to claim the second of the consolations, being backed from $8 into $4 soon after the overall markets were posted.

The Speed Star is one of greyhound racing’s most popular and keenly contested events. Greyhounds qualify for the series based on their times recorded at Sandown Park since 1 June 2019. Greyhounds can qualify either by their performance in a race, or in a qualification trial.

The first of 20 match races will jump at 5.08pm on Sunday 15 September. All match races will be showcased on Sky Racing 2 – open and free to all Foxtel subscribers, while patrons on course will have the chance to win $500 cash in our ‘Last Man Standing’ competition, and there’s $10,000 up for grabs if you can tip the card!