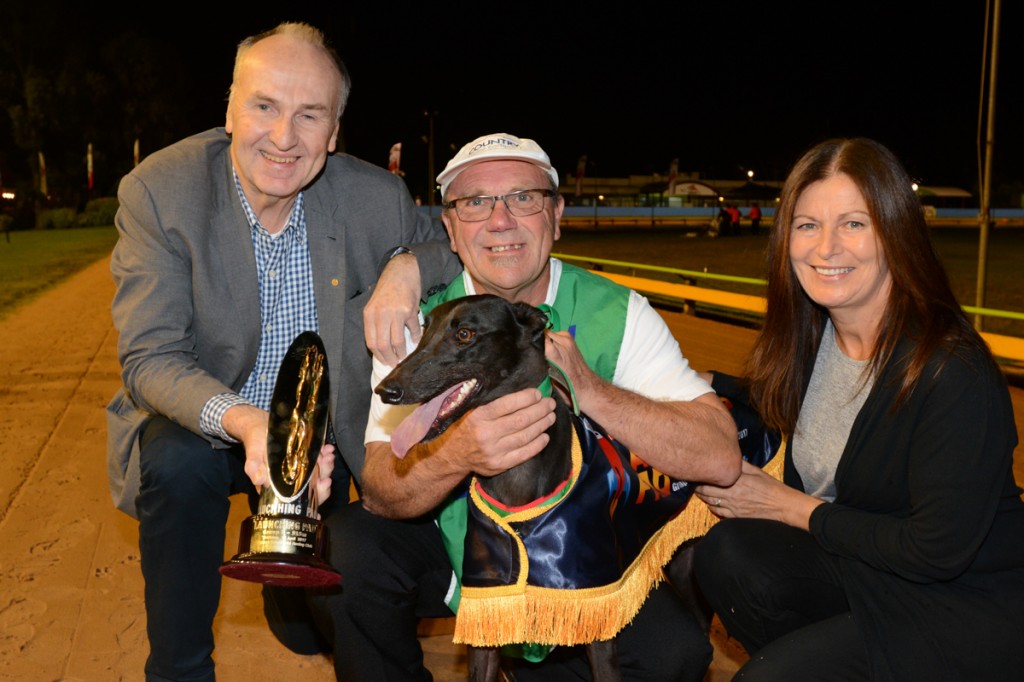 Suffragette launches onto the path to stardom


Suffragette stamped herself as a potential star of the sport after after sensationally winning the $210,000 group 2 Launching Pad by 10 lengths at Sandown Park tonight.

Trained by the husband and wife training team of Steve and Kerrie White, Suffragette was sent to the boxes as the $3.60 equal favourite after her dominant semi-final win. She and was quick to reward the punter’s confidence after beginning cleanly from box 6 to lead clearly through the first turn. The field bunched behind her allowing Suffragette to establish a race winning break down the back straight and charge to the line to score in 29.43.

“After I saw the box draw, I sat down and worked it out how I thought the race would be run – the gods were smiling on us,” said a delighted handler Steve White.

“It’s been a beautiful week, haven’t had an hiccups at all. I was always confident that if she jumped she’d win.”

Suffragette burst on to the racing scene in October 2016 with a dazzling 12 length win on debut. By January she’d already chalked up five wins (just one short of the six win limit for the series) but a minor injury allowed White to switch his focus on to the $400,000 series.

“It’s a good feeling because we set her for the race. When she hurt herself I said to her owner Geoff Slatttery, ‘we’ve got eight weeks, we’ll set her for the Launching Pad.’

“We’ve been building up her race fitness and I said that she’d peak on race night. Last week she went 29.35 and I thought ‘I hope she hasn’t peaked,’ but look at her now, she wouldn’t blow out a candle.”

White had been bullish about Suffragette’s chances from the outset, even backing her at $201 prior to the series and again at $126 after she ran fourth in her heat.

The win was the biggest for White since making the move from New South Wales to Victoria in October 2015 and there may be more to come. At just 26 months of age, Suffragette has already won $178,000 in prize money and will now be set for the $145,000 group 1 Sapphire Crown to be run at Sandown Park in May – a race White won twice with AGRA Hall Of Famer Paua To Burn in 2004 and 2005.

“Whether she won or lost tonight, the sky’s the limit for her.”

– More than 2000 people were trackside for the Easter Kids Fun Night activities. In what is fast becoming one of the club’s most beloved race nights, kids of all ages joined in the fun Easter egg hunts, games, giveaways and stacks of fun activities

– Worm Burner claimed the night’s support feature, the Listed Easter Gift, by defeating Black Mumbo by 1½ lengths in 29.22. It was Worm Burner’s third consecutive win at Sandown since relocating from South Australia to Victoria and was arguably his most impressive. He stepped cleanly from box 2 but couldn’t cross early as Black Mumbo railed beneath him to hold a slender lead early. The pair matched motors down the back straight, but Worm Burner showed his class turning for home to claim the $25,000 first prize.

– West on Hawkeye picked up $15,000 by winning the Launching Pad Consolation with an impressive hard railing performance, defeating Missed An Earn by 2¾ lengths.

– By winning over 715m in a slick 41.98, Polijuice Potion became the 68th greyhound to win over all three distances at Sandown Park