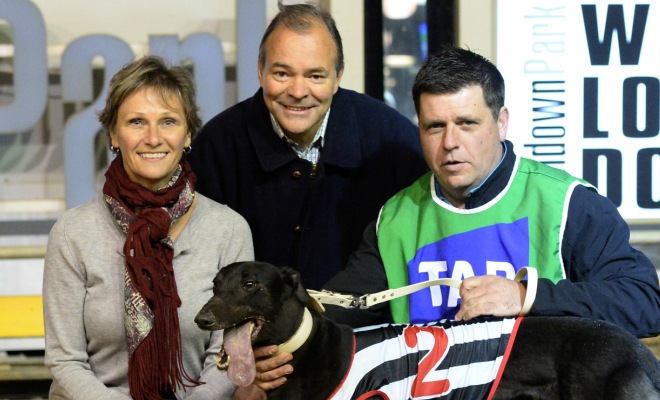 Rosie Sprite endured a bump shortly after box rise but then found a saloon passage on the rail to lead down the back straight. She maintained her break to win by 3¾ lengths at odds of $16.70.

“When we saw her come out of the kennels she was very excited and wagging her tail – she loves what she’s doing and was ready to go. Even if my dogs win a trial I treat it like a big win – it’s great to now have a city winner,” said Ladd.

Ladd’s involvement in greyhound racing began eight years ago after purchasing a pup with her husband and former CEO of the Melbourne Victory, Geoff Miles, who’s had involvement with greyhounds since he was 17-years-old.

“Rosie’s mother was the first greyhound we owned together – we got her in 2008 but prior to that I had no involvement in the industry.

“A friend of Geoff’s was going to buy the pup with him but changed his mind at the last minute. I asked Geoff why he didn’t ask me to buy into the pup, he didn’t think I’d be interested but he was wrong – the syndicate was born.”

“Our first pup was reared by Karen Leek and she asked if I’d join the GOTBA and become Secretary. I was there up until last year though I still help out at coursing events – it’s great fun I really enjoy it.

“We love it – greyhounds are beautiful and the people within the industry are great.”

Retired greyhounds raced by Ladd are prepared for adoption at their home in Burnley, where they are taught the basics of becoming a household pet.

“When our dogs retire they live with us and learn how to be a pet – we take them out and about for coffee and go to the shops – we then put them through GAP to find them a forever home.”

Rosie Sprite was one of four winners for the Rob Britton kennel last night with Lithgow Panther, Call Me Gee and Allen Portland completing the quartet.