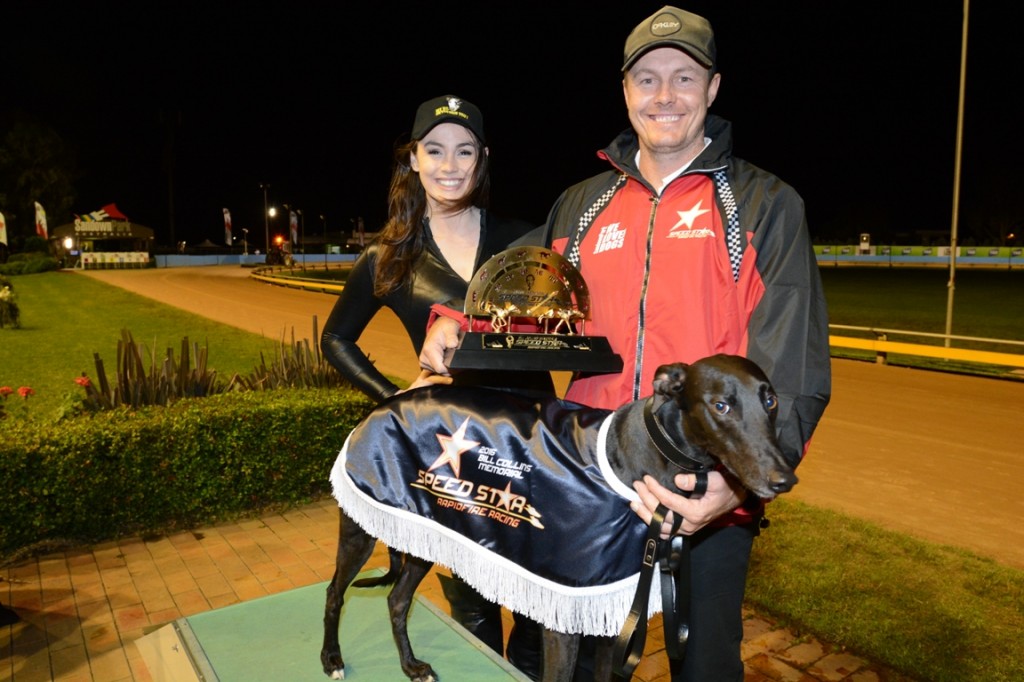 The series brought together eight of the fastest greyhounds in the country to contest a series of match races worth $10,000 to the winner of each.

Despite easing from $2.90 to $2 for the series, Blazin’ Bomber was backed in from $1.50 into $1.25 in the opening match against Dundee Osprey and soon justified the punter’s confidence. Beginning cleanly from the outside box, Blazin’ Bomber pounced to which was never threatened to stop the clock in a slick 29.090.

The time was a little over a length faster than his qualifying time recorded the previous Sunday which came as no surprise to his trainer Darren Pattinson.

“I thought he could go a little quicker since it was so windy on Sunday,” said Pattinson.

“It’s a little windy tonight too but he went as well as he should have gone. After his run I thought the others would get close to his time – they’re very fast dogs – so to beat them by two or three lengths is a great achievement.”

The others included four runners from the elite Jason Thompson kennel. The quartet was drawn against each other with group 1 winner and Speed Star favourite Dalgetty meeting Invictus Rapid in match two, and litter brothers Buck Forty and Burn One Down in match three. Both matches exciting examples of match racing.

There was never more than a length between Dalgetty and Invictus Rapid throughout their match. Invictus Rapid surprised everyone by leading his more fancied kennel mate early and maintained that lead to the back straight. Dalgetty made his move but as he loomed up to the lead, the pair rubbed shoulders allowing Invictus Rapid to boot up and again take the lead. In a thrilling run to the line, Dalgetty mustered all of his champion qualities to find the line half a length clear in 29.316.

Buck Forty entered the third match of the night with over $175,000 in prize money, compared to just $1325 in prize money from Burn One Down’s only win. However Burn One Down’s brilliant maiden win saw him sensationally backed from $15 into $6 early in the betting for the series and led his more fancied litter bother at box rise. However Buck Forty made full use of his inside draw to rail through the lead at the first turn and open a two length lead.

Burn One Down made his move off the back straight and in a thrilling run to the line, Burn One Down prevailed by a neck in 29.269.

The final match of the night saw Queenslander Outside Pass line up against Major Jackpot. Major Jackpot pinged the lids to clock a best of series 5.04 to the first mark and open a four length margin entering the back straight. However Outside Pass soon reigned in the lamplighter, and despite a bump on the home turn, Outside Pass railed underneath Major Jackpot to win in 29.25 – good enough for second place.

It was the second group race win for Blazin’ Bomber following his Cranbourne Puppy Classic victory last August, in which he defeated a quality field that included Kayda Shae and Dyna Double One.

“He’s got such a great temperament and he does everything right. We always knew he could run, it was just a matter of him maturing a bit.

“The owners are a great bunch of blokes. They’ve had dogs for a long time and never had one as good as him so they’re rapt. They go to the track for most of his runs, they even went to Perth (when he contested the Perth Cup final) two weeks ago. They’re loving it.”

Blazin’ Bomber picked up an additional $15,000 for winning the Bill Collins Speed Star, taking his career prize money to $123,965 from 27 starts. He will return to Sandown Park next Thursday night for the heats of the $145,000 group 1 Harrison-Dawson.

Later in the evening, Wind Whistler claimed the group 3 Lizrene (715m) and Zipping Kane the group 3 Racecallers (595m) placing both greyhounds in contention for the world’s richest race for stayers, the RSN Sandown Cup on Thursday 26 May.