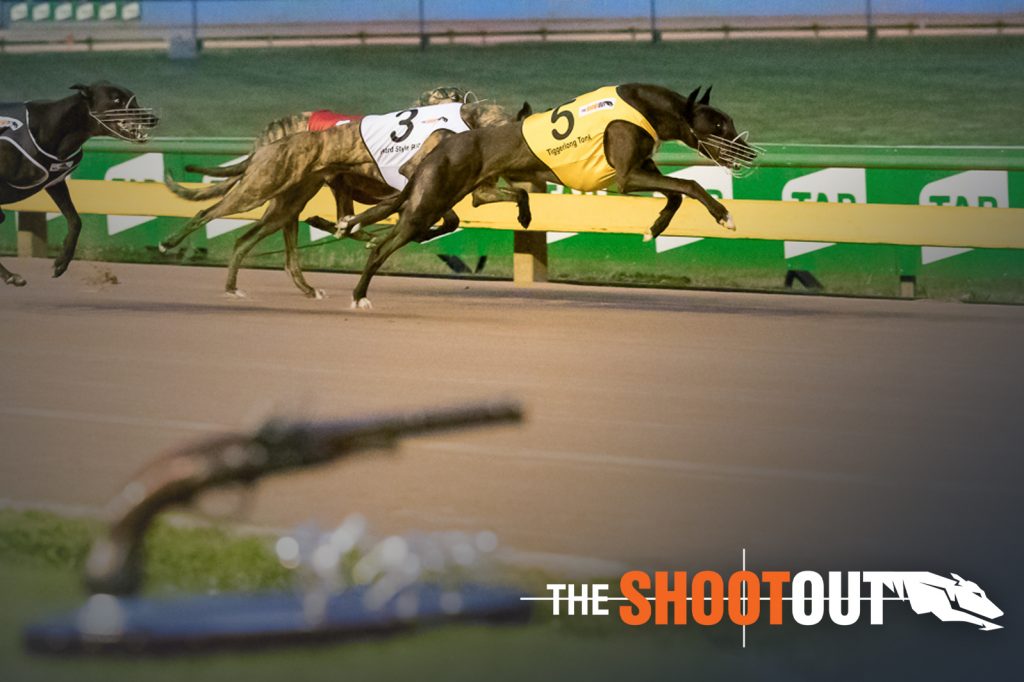 Tonk too good in sizzling Shootout

Starting the rank outsider of the four-dog contest, Tiggerlong Tonk began superbly to charge to the lead from box 5 where he quickly assumed control of the race. He had established a four length gap on his rivals down the back straight and while TAB Topgun winner Shima Shine chased gallantly to reduce the margin to a length and a half on the line, ‘Tonk’ was too good stopping the clock in 29.034.

“It’s been a funny prep going into this race so to come back and beat the dogs he’s racing against tonight, it’s a thrill,” said Grenfell.

“He pulled up a little average after Wentworth Park, then raced at Geelong in wet conditions so to come out and run the time he has shows that he’s back to his best.”

Tiggerlong Tonk has now won 31 of his 59 starts and over $328,000 in prize money. His winning time slashed half a length of Xylia Allen’s previous race record, and took almost two lengths off his own previous best time set when winning the group 3 Easter Gift in April. It was the 12th fastest time ever at the track and the third fastest recorded in 2020.

“We thought we had him cherry ripe and that all he had to do was jump. To run 5.03 (to the first split) – that was what he was doing at the start of the year – so to do it now so close to the Melbourne Cup we couldn’t ask for more.”

Tiggerlong Tonk will now be set for the heats of the TAB Melbourne Cup on Friday 20th November where he is currently rated a $17 chance to claim the world’s greatest greyhound race.

Ten TAB Melbourne Cup Preludes were also run on the night representing the final opportunity to qualify for next Friday’s Cup heats. Three time Cup winning trainer Jason Thompson took the training honours with Immunity (29.27), Aston Silk (29.46) and Zipping Bram (29.35) giving him a winning treble, while People Get Ready (29.35), Weblec Ace (29.20) and Jax Bale (29.21) all impressive in their respective victories.

Meanwhile TAB Million Dollar Chase winner Handsome Prince trialled between races, running 29.13 at his first look at Sandown Park. His splits of 5.08, 18.49 gave him a middle section of 13.41, just 0.01 seconds outside of Simon Told Helen’s unofficial record. His quote for the TAB Melbourne Cup was immediately slashed from $26 to $17 following the trial.

Shootout night was the third of five nights of racing across The Meadows and Sandown Park which form Victorian greyhound racing’s inaugural Metropolitan Festival of Racing, where almost $2 million in prize money is being distributed, culminating in the $630,000 TAB Melbourne Cup on Friday 27 November. Click here to read more.