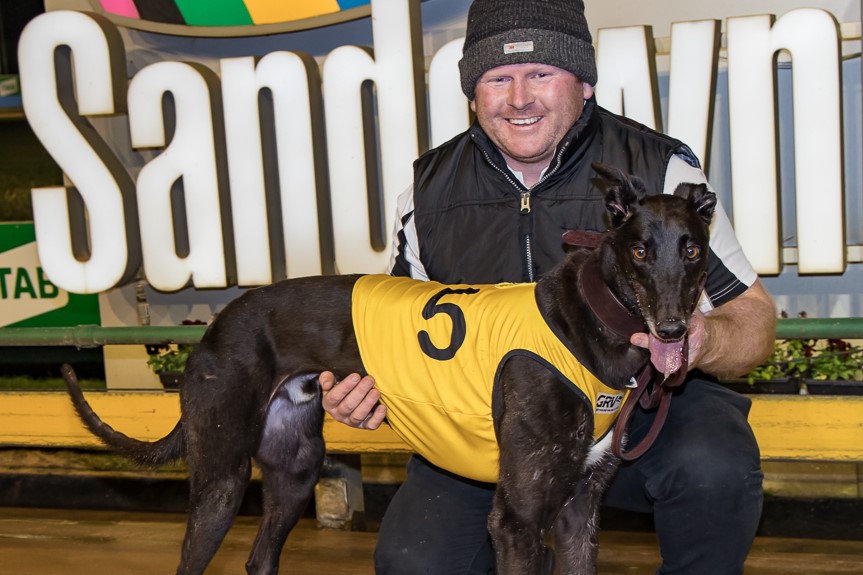 Fulford can say that!

You couldn’t wipe the smile off trainer Corey Fulford’s face last night after Can’t Say That caused the biggest upset of the night.

Can’t Say That opened a $14 chance before drifting to start the $34 outsider. Despite the lack of support, Can’t Say That began well and mustered quickly to lead early and booted clear of the field after a scrimmage at the first turn. Kingfisher Rose set off in pursuit and reduced the gap to less than a length as they turned for home. However Can’t Say That held on for a blowout victory in 29.89.

While punters were left to lament the result, Fulford was delighted to land the $5600 winner’s cheque which is $5600 more than he paid for the son of Barcia Bale.

“He was a giveaway greyhound,” said Fulford.

“A friend of ours asked if we wanted him. We have put a lot of work into him and we’re starting to get the results now.”

Fulford, who received his trainers licence in 2013, trains a team of 10 greyhounds with his father in the small town of Bundalaguah near Maffra in Gippsland.

Can’t Say That gave the Fulford’s their first city winner when he won a 1-4 win Warragul to Sandown final in March, however his form tapered as they dealt with some minor issues. A vet endorsement for an early race helped to turn around his form, finishing second twice before last night’s breakthrough victory.

“He stresses out in the later races. We were granted an early race request and that seems to have done the trick.”

The win capped a memorable day for the Fulfords. While Can’t Say That was shining under the bright city lights, Pilot Pete and Gone Early had completed a winning double for the Gippsland trainers at Warragul earlier in the day.

Following Can’t Say That’s victory, superstar sprinter Hooked On Scotch set the track alight in running the second fastest time ever for a greyhound on his 595m debut, stopping the clock in 33.81.