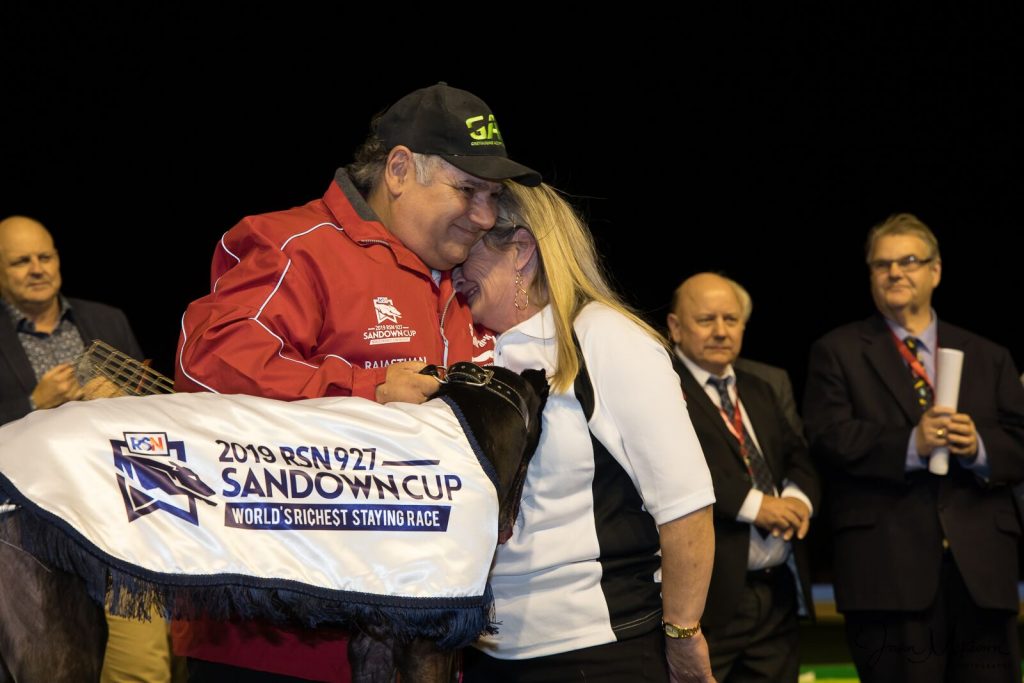 
Rajasthan caused one of the greatest upsets in the history of the RSN Sandown Cup when the 30/1 chance led all of the way to win the world’s richest race for stayers.

While all eyes were on defending champion Tornado Tears in box 6, it was Rajasthan in box 7 who began quickest to cross to the fence and lead through the first turn. Poco Dorado followed him across from box 8 and as the rest of the field jostled for position, the pair established a four length break on their rivals with a lap to run.

Down the back straight the moves came. Poco Dorado reduced the margin to less than a length as Peppertide emerged from the chasing pack to also apply pressure. But Rajasthan continued to respond, and when he was able to hold off one final challenge from the fast finishing Ella Enchanted, the $175,000 first prize was his.

Trainer Robert Camilleri and his partner Debbie Coleman were overcome with emotion after their biggest win of their training careers.

“Look, the money is great don’t get me wrong. But to win the most prestigious staying race around with some of the best owners you could have hoped, it’s just an overwhelming feeling all the way really.”

That Rajasthan led came as no surprise to Camilleri, but it wasn’t until late I the race that he thought he was a winning chance.
“He’s always been a good beginner. I thought if he jumps the way he can jump he could lead, particularly for the first three quarters of the lap or something. But as the race got further and further and they weren’t picking him up I kept thinking, he’s not going to stop today, this bloke, he’s not going to stop!

“He is three different dogs, and tonight he was the right one. His eyes were focused, and not wondering. We changed his work around a bit this week, so he’s not bored and he loved it – he was jumping around, wanted to play, he was in terrific frame of mind. He ran super at the Meadows when we trialled him on Monday and his run home time was enormous.

“And he’d come off the track like he wouldn’t blow out a candle, so I said to the guys if nothing else, you’ve got a 110% fit dog tonight. He should lead, and whatever happens after that, happens.”

Rajasthan was purchased by South Australian Tim Aloisi, who made the trip from Adelaide to be trackside for the evening. And while the jubilant ownership group looked set to spend the next few days celebrating their win, Camilleri is looking forward to a quieter time at his Lara kennels.

“I think it’s going to take me a week for it to sink in properly, but I’d really like Deb and the boys to have a bit of a rest. They’ve put up with my moods, just to make sure things get done right and stuff and, they’ve been terrific. They’ve put a lot of work in and they deserve a bit of a break, and then hopefully we can have a few days off ourselves, that would be great.”

Favourite Tornado Tears finished 7th after finding trouble throughout the run, his hopes of claiming a fifth group 1 dashed when suffering a severe check as he went for a rails run down the back straight.

“The last check he got up the back, I think that was the end of him. Even up until that stage I thought he was still in the race, but the dog outside (Bago bye Bye) him wanted the fence harder than him,” said trainer Robert Britton.

“Just a matter of bad luck at the wrong time.”

Earlier in the night, Orson Allen confirmed his standing as the country’s premier sprinter with victory in the $145,000 group 1 Harrison-Dawson, while Neo Cleo made it five wins from five starts since joining Robert Britton’s kennel with a determined victory in the Sapphire Crown.