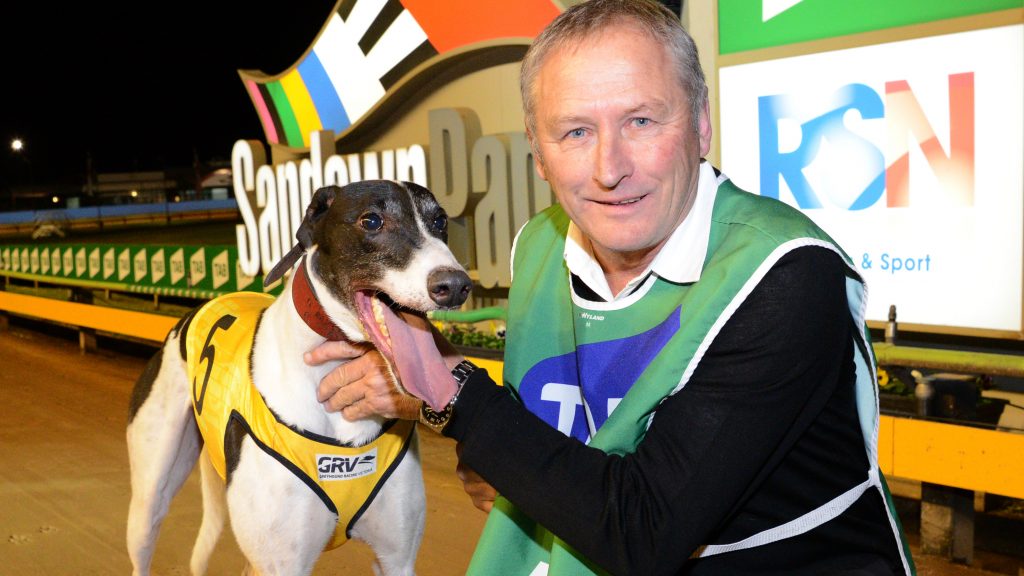 Batman’s back and ready for RSN Sandown Cup defence


Any questions about Tornado Tears’ fitness were put to rest after he made a brilliant return to the track in a heat of the RSN Sandown Cup at Sandown Park last night.

Despite spending four weeks away from the track recovering from an injured pad, punters sent Tornado Tears to the boxes the $1.04 favourite for the second time in his career and didn’t disappoint those who took the short quote. He began cleanly from box 5 and found his way to the rail despite being put under early pressure. Improving to second place past the post the first time, ‘Batman’ set off in pursuit of leader It’s A Frenzy entering the back straight and quickly assuming the lead before racing to a nine length victory over Two Times Twice, clocking a slick 41.37 seconds.

While the crowd – and social media – was abuzz with remarkable performance, trainer Robert Britton was more relieved his charge had progressed through to the final.

“Even though the dog has healed he hasn’t been able to put in the work that we really wanted to so I was going in knowing we were a little underdone, but he got a great clear run in the race and that’s exactly what we need at this time.

“He’s blowing a lot more than he normally does, but as long as he has a nice easy week he should strip fitter next week.”

The win improved his record over the Sandown Park 715m journey to seven wins from as many starts, and his winning margin was his third biggest behind his epic 18 length victory when breaking the Cannington track record in March and his staying debut in April 2018 in which he won by 11.14 lengths. His winning time was the ninth fastest ever run, giving Tornado Tears four of the 10 fastest times recorded.

Tornado Tears will meet a hot field in his attempt to become the sixth greyhound to defend his RSN Sandown Cup title.

Ella Enchanted, having her second start over the stayer’s journey and first since running fourth to Tornado Tears at group 3 level last September, was brilliant in winning her heat in 41.54.

Jumping from box 3, she began well but was shuffled back to the rear of the field through the first turn and spotted early leader Poco Dorado eight lengths with a lap to go.

Co-trainer Jamie Ennis told RSN927 in the lead up to the race that Ella Enchanted was ready for the ‘half-mile’ trip and it proved to be the case as she unleashed a stunning finishing burst to run down 15-time 700m race winner Poco Dorado and score by six lengths.

Queenslander Bago Bye Bye won his heat by ¾ of a length in 41.84, with runner up Blue Moon Rising joining litter-mates Poco Dorado and Two Times Twice in the final of the world’s richest race for stayers.

Rajasthan defeated Peppertide in their heat in 41.99 to round out the field.

Heats of the group 1 Harrison-Dawson and group 1 Sapphire Crown were also run on the night with Orson Allen and Flynn stealing the show in a race quickly regarded one of the races of the year.

Click here for a wrap of the Harrison-Dawson and Sapphire Crown heats.