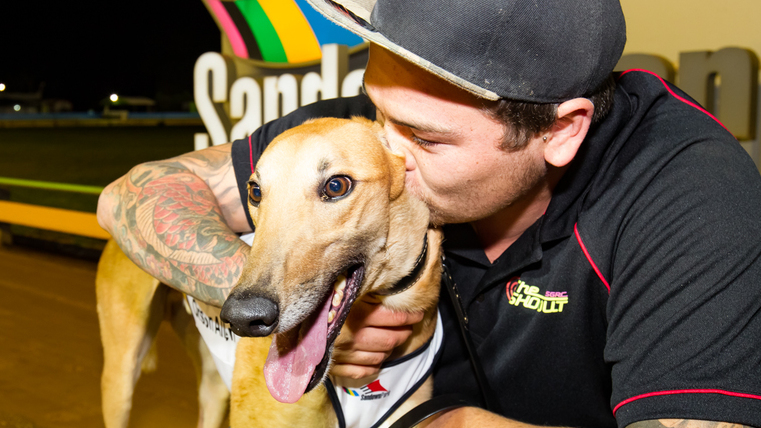 
Orson Allen showed he will be a force to be reckoned with in next week’s TAB Melbourne Cup heats following his brilliant all of the way victory in the $25,000 winner-takes-all Shootout at Sandown Park last night.

Stepping cleanly from box three in the four dog field, Orson Allen accelerated quickly to assume the lead through the first turn and was never headed, stopping the clock in 29.191 to break through for his – and his 24 year old trainer Correy Grenfell – first group race win.

“He went super,” said a delighted Grenfell after the race.

“We’ve been in a few group finals now and that’s the first one we’ve grabbed. We knew the dog would get one it was just a matter of when.”

Orson Allen showed his Shootout credentials a week earlier by running down fellow Shootout finalist She’s Gifted in a sick 29.183. He then ran a luckless fifth in the group 3 Silver Bullet at the Meadows on Monday night, meaning his Shootout run would be his third race in eight days. While not an ideal preparation for a race of this nature, Grenfell was proud of his charge’s performance.

“I was a little worried about the short back up – it’s the first time I’ve backed him up so soon.

“The race on Monday didn’t go to plan, he got knocked around a little but he pulled up well from it so it’s a credit to him.”

His Shootout win was his 15th from 30 career starts, taking his prize money beyond $140,000. He will now be set for the heats of the world’s greatest greyhound race, the $630,000 TAB Melbourne Cup in which he is rated a $12 chance by tab.com.au to claim the final. But first, a chance to relax.

“We’ll give him a couple of days off before getting him back into the normal training that he does every day. I might even take him down to the beach tomorrow or the day after and run his legs through the water. I’ve done it with (Dyna) Chancer after a couple of his tough runs over 700 and he seemed to love it down there. I haven’t done it with Orson yet but after what he’s done he deserves to go for a paddle.”

Last night was the first night of a massive three weeks of racing at Sandown Park. In addition to the Shootout, 10 TAB Melbourne Cup Preludes were conducted representing the final opportunity for greyhounds to qualify for the Cup heats to be run on Friday 16 November with the final to be run on Friday 18 November.

Paw note:  Orson Allen, the fastest qualifier for the Shootout, was backed into favouritism late in betting making him the fourth consecutive favourite to win the race. He also became the 20th male greyhound in 21 editions to win the  race, and the sixth consecutive winner to lead all of the way.

Orson Allen breaks through for his, and his trainer’s, first group race victor in the group 3 Shootout