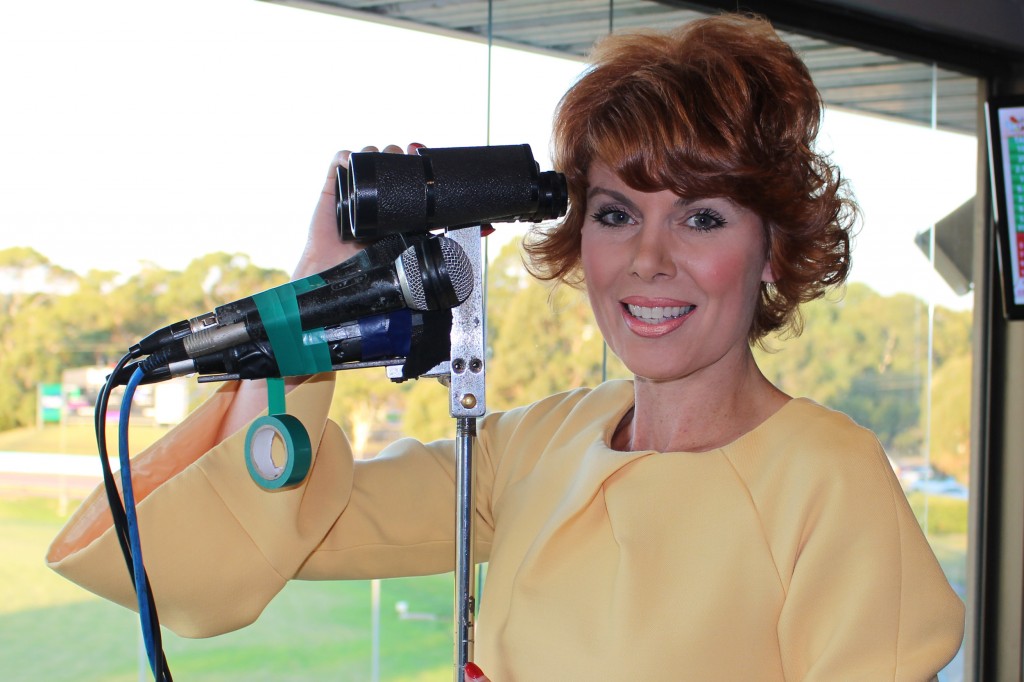 
She’s called racing around the world, but calling tonight’s Judy Hayley Memorial is a highlight for Australia’s only female race caller, Victoria Shaw.

Named in honour of the 2001 Melbourne Cup winning trainer, the Judy Hayley Memorial (open to lady trainers only) is the feature event at the club’s annual Shades of Greyhound Girls Night Out which celebrates women’s contribution to the sport.

Shaw is a trail blazer in Australian race calling. Having had a lifelong love of broadcasting, Shaw began calling races several years ago and faced many challenges in a trade dominated by men.

“It was a bit difficult because there’s no other women to refer to,” she said,

“You take elements or aspects of the gentlemen’s calls, things that they do and try and pull that together to suit your own abilities. Rob Testa has been fantastic – most of the men have been incredibly supportive – and so has the public as well.

“It’s a little bit sad that I’m still the only one that has expressed an interest in race calling, but it’s too exciting to miss out on. Really, race calling represents live broadcasting at its best – there’s no take two. You can do speed maps, you look at form and do replays until you’re blue in the face but ultimately when the dogs jump out of the boxes it’s that great element of the unknown that I find a little bit addictive as well as very exciting.”

A regular caller at picnic and non-TAB thoroughbred meetings around Victoria, Shaw has also plied her trade around the world in a code of racing most Australians are unfamiliar with – arabian racing.

“I’ve had some wonderful opportunities courtesy of pure bred arabian racing. A lot of greyhound enthusiasts would be very familiar with Ben Thompson’s (son of champion trainer Jason Thompson and one of Victoria’s leading apprentice jockeys) success in Abu Dhabi and I was there for that race.

“The same tour has taken me to other places around the globe. To see racing in other countries that in Australia we don’t have a great feel for or much knowledge of, places like Poland as an example, was an extraordinary opportunity.

“And even the sentiment and feeling around greyhounds in other cultures, particularly in Europe, to see how they’re portrayed in art going back hundreds of years. It just highlights what a beautiful animal they are and how so many European people have such adoration for the animals.”

Shaw’s appreciation for the greyhound has grown since she began calling races at Sandown Park on Sundays around 18 months ago. While calling each racing code presents its own unique challenges, there’s one thing that stands out for Shaw when calling greyhound racing.

“The speed – I love the speed,” she said, breaking into a broad smile.

“It’s the speed of the event that I find addictive and the way that a race can change complexion in the blink of an eye.

“We have some great race callers in this country, the likes of Rob Testa and Ron Hawkswell. The excitement that they convey, they sense what’s unfolding and they become part of the event as well. I love listening to greyhound race calls.”

Having called Sunday’s Judy Hayley Memorial heats, who does Shaw believe is the greyhound to beat in tonight’s final?

“Rig Fifty Five was a bit unlucky to run in the worst of the weather on Sunday, so I think from the red he’ll improve on his time in the final. But it’s going to be an open race and an exciting night for everyone.”

Supporting three fantastic causes – the Will Murray Foundation, Monash Health Breast Oncology and Leukaemia Units, and the Matt Height Appeal – Sandown’s Shades of Greyhound Girls Night Out will feature champagne and cocktails, music, prizes and great entertainment on and off the track. The feature event of the evening is the Judy Hayley Memorial for Lady Trainers only, named in honour of the 2001 Melbourne Cup winning trainer who lost her brave battle with cancer in 2012.