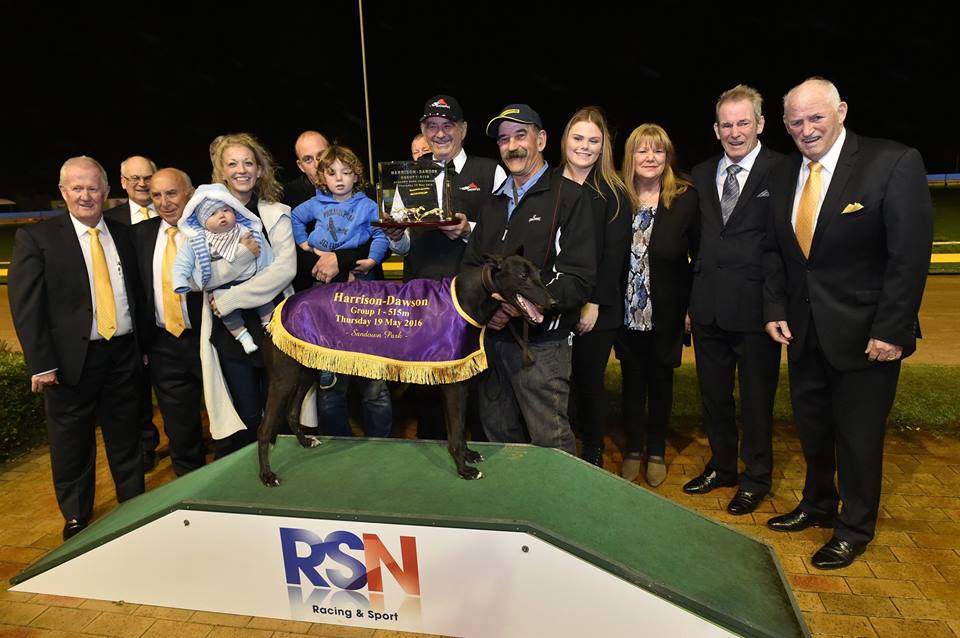 
Dundee Osprey and his trainer Geoff Scott-Smith upstaged some of the biggest names in greyhound racing with a stunning victory in the $145,000 group 1 Harrison-Dawson at Sandown Park tonight.

“Years ago we won the Roy Maidment, that was before group races but it was still a big thrill. To win this race tonight is super, super special.”

Dundee Osprey qualified for the $145,000 final on the back of an outstanding heat win in 29.31, and despite lining up in his fourth group final in his past seven starts and boasting the fourth fastest time at the track in 2016, was sent to the boxes as the 25/1 outsider. Beginning well from box 2, Dundee Osprey sat behind early leaders Aston Bolero and One For Me through the first turn before switching three wide off the back straight and powering to the line to win by 3½ lengths in 29.25. Once For Me hung on for second ahead of the fast finishing favourite, Blazin’ Bomber.

“He was pretty switched on tonight,” Scott-Smith continued.

“A couple of weeks ago he was a little bit down, he lost a little bit of weight when we took him to Brisbane for the Queensland Derby and he’s taken a while to come back. He can be a difficult do to train sometimes – he’d make a good poker player because you’re just never sure where he’s at.

“When he arrived tonight I thought he was a little bit better than he was last week, and he had to be because you can’t afford to be off even a fraction in these sorts of races.

Dundee Osprey is one of just six greyhounds Scott-Smith has in his kennel – all of which carry the ‘Dundee’ prefix – and all are from the first litter he bred since returning to the sport after a 30 year absence.

Despite winning one of the biggest races on the calendar and with friends and family trackside – as well as a large number of well wishers – Scott-Smith remained characteristically humble and resisted the temptation of a large celebration, saying “I’ve got things to do with the dogs at home so can’t get too carried away. Those days are gone!”

The win was Dundee Osprey’s 9th from 23 career starts, and the $100,000 first prize boosted his prize money to $134,800. Scott-Smith was non-committal about Dundee Osprey’s next target, but suggested the group 1 Peter Mosman Classic at Wentworth Park as a possibility.

The Harrison-Dawson commemorates the contribution of three stalwarts of the Sandown Greyhound Racing Club – former chairman Henry Harrison, his daughter Loretta, and current chairman Geoff Dawson – and since adopting its current format (best 32 male greyhounds) has quickly established itself as one of the country’s premier races.