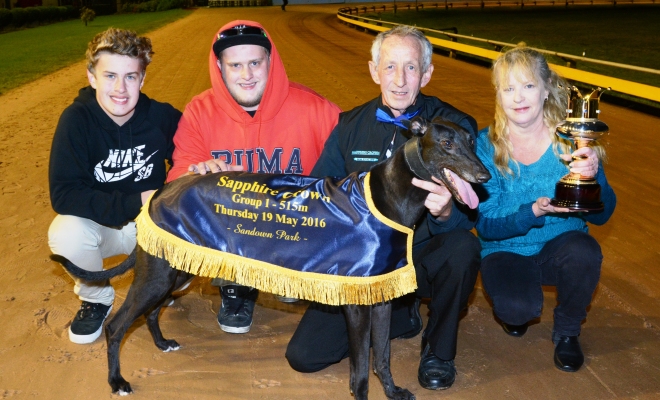 
A fairytale was completed tonight when Narralee staved off her rivals to take out the group 1 Sapphire Crown.

Narralee exploded out of box 2 to lead clearly from the wide running Shared Equity and favourite Folio Bale. As the trio battled for position down the back straight Narralee held her head. Folio Bale threatened danger turning for home but Narralee held on to win by a head in 29.47.

Trainer Steve Creighton was ecstatic post-race in what was his first group 1 win.

Narralee was struck down by injury in July of last year and has recovered with the help of one of greyhound racing’s most respected trainers.

On her return to racing she battled to show her customary early speed, but it was a slight change of plan by Creighton that brought her back to her best.

“We thought we’d give her a couple of races at Bendigo – she wasn’t able to keep up with the younger dogs early so I thought we’re going to have to step her up in distance.

“We took her back to our home track (Sale) where she won in best of day time. We then took her to Traralgon and she won in what was her first look at the track. I was impressed by that run so I thought right, we’ll nominate her for the Sapphire Crown. It wasn’t a series we targeted but she was going so well we decided to put her in.”

“I said to the owner (Linda Gray), win lose or draw we’re going to have a go at it.”

Linda Gray and her sons Liam and Jordan were on hand to celebrate the win.

“It hasn’t sunk in yet – when I wake up in the morning I’ll probably think I’m dreaming,” said Gray.

“It’s just not something you think is going to happen – we’re just ordinary people and you never think something like this could happen to people like us.”

The $100,000 first prize has given Gray the opportunity to fulfill a dream.

“I can now buy myself a brand new car – it’s always been a dream of mine.”

“When I walk into the RSL with the trophy there’ll be a cheer, there’s a big fan club down there.”

Gray got involved in greyhound racing as a youngster courtesy of her uncle who tragically passed away in a car accident 15 years ago, though hopes he is witnessing the triumph unfold.

“It’s a shame he’s no longer around – I sometimes think he’s up there saying ‘you bloody beauty’.”

The Sapphire Crown was run in conjunction with the Harrison-Dawson, click here for a full wrap.

Narralee takes out the Sapphire Crown in 29.47

The Sapphire Crown is restricted to female greyhounds only and is one of the premier events on the feature event calendar having been won by some of the greatest to grace the track including Paua To Burn, Betty’s Angel and Xylia Allen.