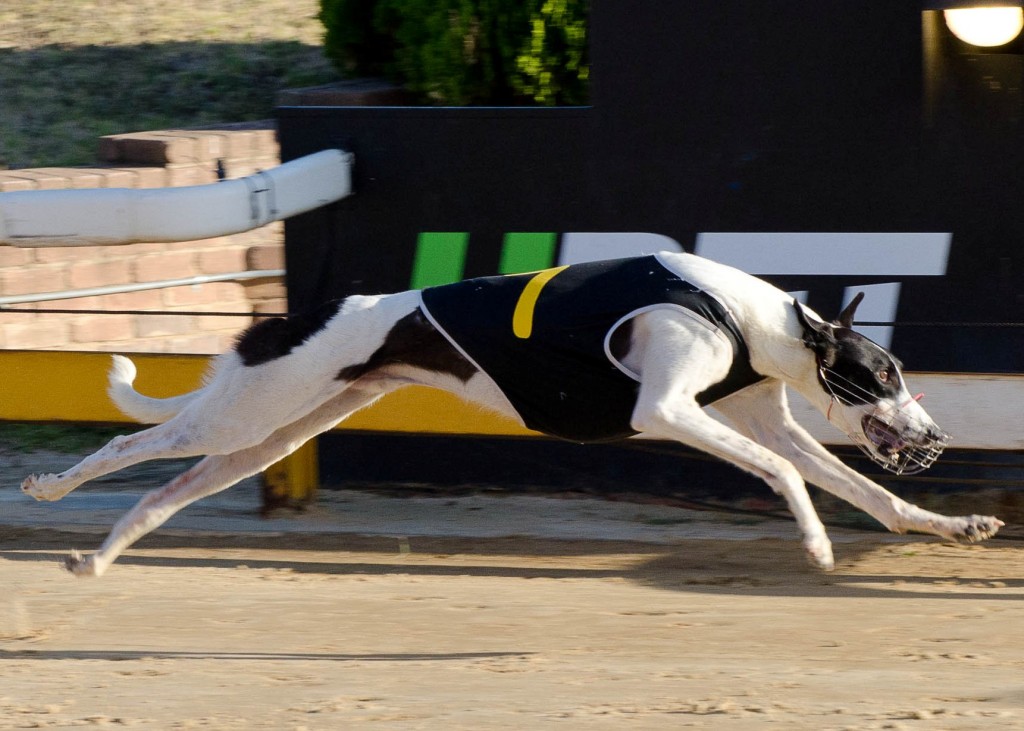 
Hukanui might be the rank outsider in Thursday night’s $200,000 group 2 Launching Pad final, but the dog is no stranger beating the odds.

The $51 chance is trained in South Australia by Tony Rasmussen and was purchased for just $1000 as an 11 month old pup. It looked like a poor investment.

“Steve Collins broke him in but he took a while to get going,” said Ramussen.

“By the time he came back to the kennel the reports weren’t very positive, but we decided to persevere.

“My daughter loves him and he’s a great dog at home so I kept working with him but kept going terribly. Then, after about eight trials, it just clicked.”

And it clicked in a big way. One his race debut Hukanui won by more than 12 lengths breaking 30 seconds for the Angle Park 515m trip.

“He railed beautifully, he’s a really hard chasing dog and very strong. His future is as a stayer, but I don’t like stepping them up until they’re 2 and half (Hukanui turned 2 February). We’ll be patient with him and step him up when he’s ready.”

Before embarking on a career in the staying ranks, the son of Kelsos Fusileer (the same sire as retired champion Fernando Bale) has Thursday night’s Launching Pad to negotiate. A $501 chance before the heats, his progress to the final came as no surprise to Rasmussen.

“I had a little bet on him before the heats,” he said wryly.

“My mate suggested I take him across for the series since he’d only won six races. I said ‘do you think he’s good enough,’ and he thought he was. I figured he’d already paid his way so I thought why not have a crack.

“I took him across to Sandown to trial after the last race one Sunday afternoon and he ran 29.40 and got home in 10.29 which is absolutely flying. We bought a ticket and here we are.”

Hukanui has shown glimpses of that brilliance during the series, however his Launching Pad campaign almost ended at box rise in his heat. Jumping from box six, Hukanui found immediate trouble and was checked again at the first turn before gathering himself and storming home to run second. The effort took its toll.

“He pulled up a little sore and I nearly had to scratch him from the semi finals. We got him right but he hadn’t done any work during the week, so he was a little underdone.

“I was really happy he got through the semi final (after running second to Dream Edition). He’s good as gold now and has had a much more normal week so I think he’ll improve again. He’s done amazingly well to get this far so hopefully he’s on the way to something special.”

The Launching Pad is the feature race on a big night of action at Sandown Park. Featuring the Easter Kids Fun Night, there is loads of free entertainment for kids including being an Owner for the Day, Race the Easter bunny, a huge Easter Egg hunt, music, face painters and stacks of prizes and giveaways.

Entry is free, gates open at 6pm with the first of 12 races scheduled for 7.09pm.

PAW NOTE: Hukanui is named after the primary school that Tony Rasmussen (a former kiwi) attended in the city of Hamilton, New Zealand.