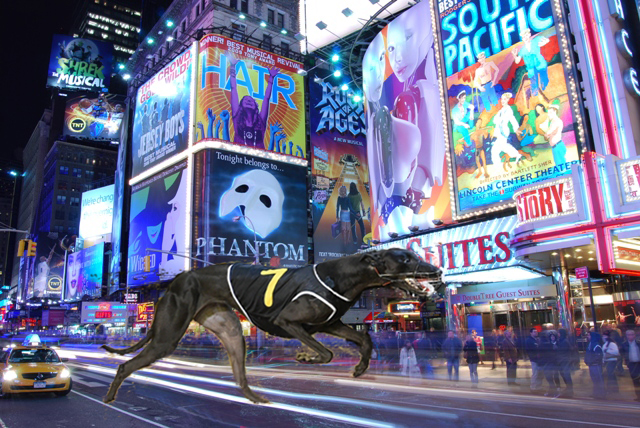 
This Thursday night the pen is primed to mark plenty of winners on what is looking to be a promising night for Sandown Park punters.

The racing begins with the first at 7.09pm. We head straight to race 2 and Broadway Miss (pictured racing through Times Square) is drawn beautifully in box one.

The Mick Carter prepared youngster was unlucky last week from box 7 when posted three wide at the post the first time. Given she had an inside draw last week I think she would have hunted through and led instead of being posted wide, working hard behind the leader mid-race.

With the aid of the inside draw I’d be placing bets to the rule of $1 a win and $2 a place depending on how much you are willing to spend.
.

Midway through the program I think Sisco Fiasco can bounce out in to the lead as she did her last week, which I think will have her a super chance of running in the placings.

Watch: Sisco Fiasco (3) is run down in the dying stages by Know Danger over 595m at Sandown Park last Thursday night.
.

Later on in the night I’m keen on Dyna Nihilist, who has been a little bit of a money muncher, proving unlucky of late. Back to the 515m and drawn perfectly near the fence, I think he can follow through into a challenging position and be, at worst, a good place bet.

His past few runs have been solid despite being from unsuitable wide alleys. I think It’s important that Memphis Jookin’ pushes up hard early from the inside to give room and something for Dyna Nihilist to follow.


Watch: Dyna Nihilist (8) can be seen looking for the fence from his wide draw during his unlucky fourth at The Meadows last start.
.
The last on the card wraps up at 10.52pm and punters will be expecting to go out on a winning note. I think they will be with the in form former Northern New South Wales sprinter Billo’s Pick. With a fast beginning provincial sprinter drawn on his inside and a noted wide runner early drawn on his outer, the now Kel Greenough prepared chaser should be continuing his unbeaten form since moving to Victoria.

His last start Meadows win looked tip top with smart sections and a terrific overall run, so he should be sending us out on the right side of the ledger.

Watch: Billo’s Pick (8) makes it three from three in Victoria with a slick win at The Meadows last start in 29.865sec after running 5.02sec early.