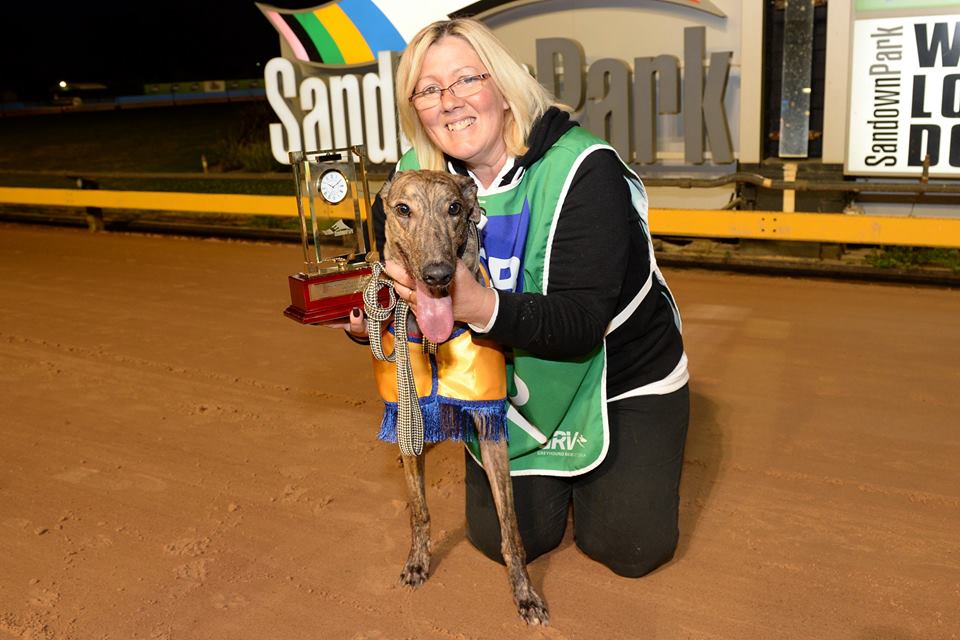 
Lamia Bale claimed her third win in a week to take out the $36,000 Group 3 Sir John Dillon Memorial at Sandown Park tonight.

Beginning quickly from box 2, Lamia Bale powered to an early lead over TAB favourite Awesome Project and that’s how it stayed, racing to a 3.5 length victory in 34.09 seconds over the 595m trip.

“I thought once she got out in front she’d be hard to run down. It was an impressive run given it was only her second start over the distance.”

After impressing in her heat win the previous Thursday, Lamia Bale showed her versatility by returning to Sandown Park on Sunday and winning a heat of the Group 2 Macro Meats Laurels over 515m. While competing in the two series wasn’t the original plan, Collins was confident Lamia Bale was capable of completing the task set for her.

“The heats on the Sunday caught us out a little bit but it’s worked out so far. She works the house down at home, and she’s one of those dogs that pulls up a treat after each run.

“She had a freshen up after her run on Sunday and she’s was jumping out of her skin, ready to go tonight. She’ll have an easy couple of days now and hopefully be right to go again on Sunday.”

Tonight’s win was Lamia Bale’s 10th in 33 career starts, and the $25,000 winner’s cheque took her career earnings to $83,855. If she runs in the first two in her Macro Meats Laurels semi final on Sunday, she’ll qualify for the final on Sunday 21 December and compete for a $50,000 first prize.

For runner up Awesome Project, it completed a remarkable 2014 which saw the Darren McDonald trained chaser place 15 out of 16 starts at Sandown Park – winning 10 – qualify for five feature finals and earn $178,210.