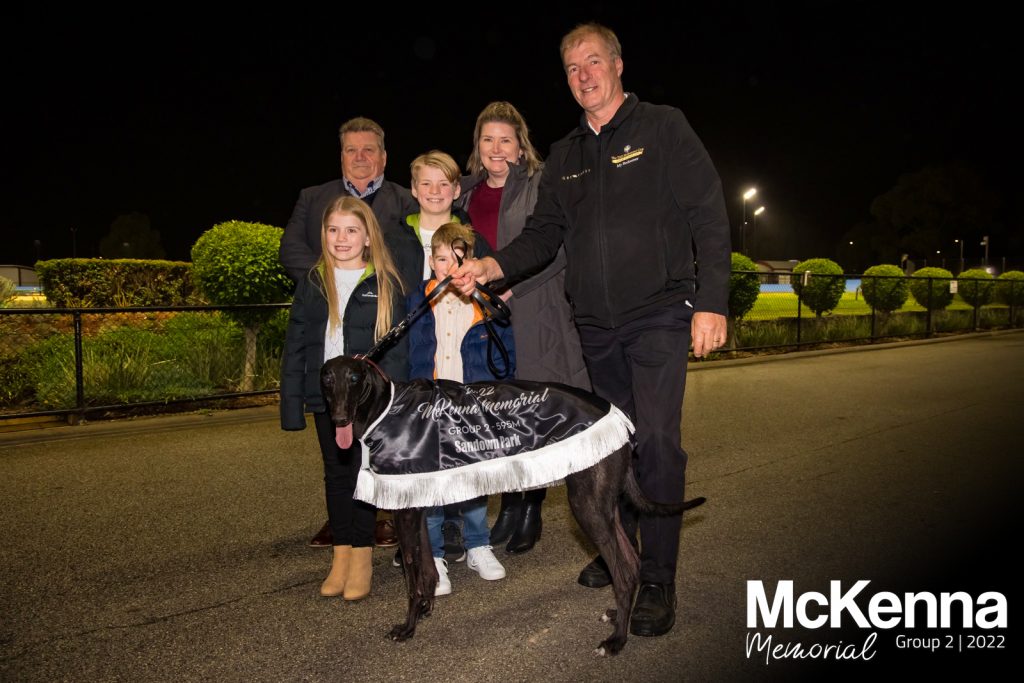 Subsequently his faith and astute judgement has quickly been paid back in spades!

Aloisi had ‘40,000’ reasons to smile when Stout Monelli landed the Group 2 McKenna Memorial (595m) at Sandown Park on Thursday night.

Last year, Stout Monelli won the G3 Paradise Street Trophy and was runner-up in the G2 WA Derby – both at Cannington – when prepared by his breeder, David Hobby.

“He was fired up tonight, he pulled to the boxes,” Geall said of Stout Monelli’s McKenna Memorial victory.

“He had to get out and once he got to the front, I was pretty confident, but then when ‘Jack’ drew up alongside him down the back, I actually thought ‘Jack’ was going to do it.

“But he’s a quick dog, ‘Stout’, and Tim (Aloisi) has got a very high opinion of the dog and it’s been vindicated.

“I’ve known Tim for quite a long time. He bought dogs off us years and years ago, even going back to Striker Klinsman, a very good dog that he bought.

“He’s very astute, he’s got a reputation Australia-wide that he’s a very astute form guy and we just became friends over the years.

“Then about six weeks ago he rang and said he wanted to send Stout Monelli over. I knew him, so I jumped at it, even though I didn’t have any room. You’ve got to make room and I’m glad I did.”

And seeing his two dogs in front, Geall added: “What a thrill that was, to see the two dogs going hammer and tong down the back. ‘Jack’ was able to get over from box eight and sit outside Stout Monelli but that was always going to be very hard.”

Geall also paid homage to the prestige of the McKenna Memorial.

“We’ve never had dogs fast enough but this time we had the two dogs that were very, very good dogs and I’m just glad we won it because it’s been going 51 years and it’s a prestigious race and a real honour I felt.

“I wanted to win the race and it was great to meet some of the family, coming out on a cold night – the little great grandkids or grandkids, it was good to see them out at the dogs.”

WATCH: SA sensation STOUT MONELLI (B3) was ‘bold and strong’, posting a 34.03sec all-the-way win in the McKenna Memorial.