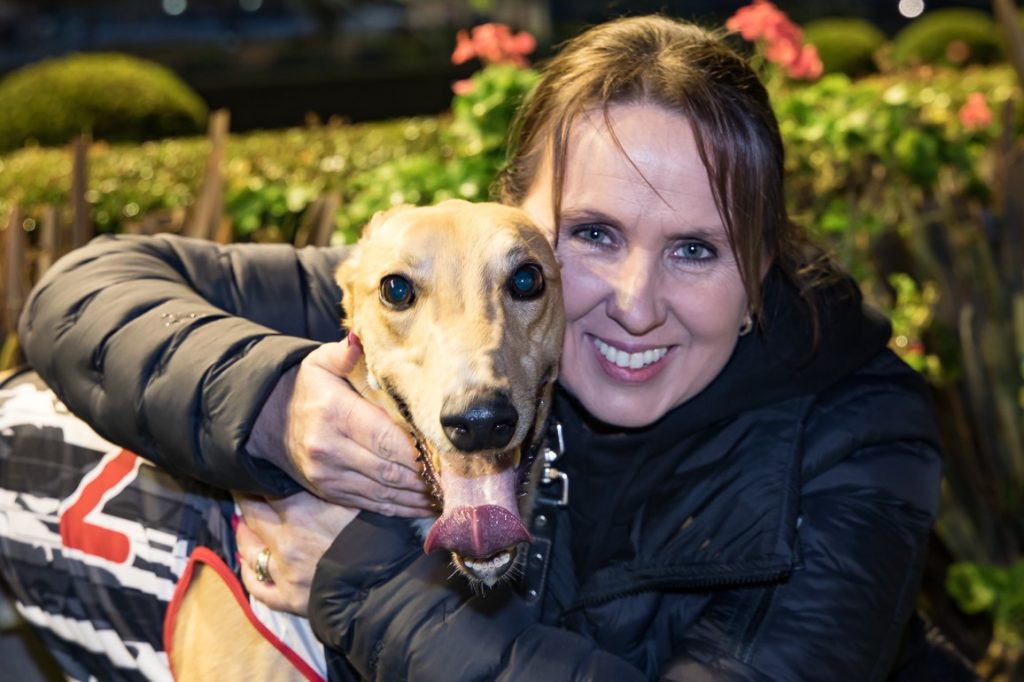 Leading Pearcedale trainer Jason Thompson chalked up a winning double in Victoria and Queensland last night with all four winners coming within an action packed hour.

Black Opium was the first of the winning quartet, blitzing her rivals by 12 lengths and advance to next week’s group 1 Brisbane Cup at Albion Park. Her winning time of 29.52 was two lengths faster than the time she ran when second in last year’s Brisbane Cup final which was won by Sennachie in track record time and will now line up in her eighth group 1 final.

Jason’s wife Seona was on handling duty at Sandown Park but was glued to the television screen as ‘Sarah’ recorded her 27th career victory in one of her most impressive performances.

“She was up there for about six or seven weeks with (leading Queensland conditioner and caretaker trainer) Tony Brett last year so she knows exactly what’s going on,” said Thompson.

“She loves it up there, it’s a nice little holiday for her. Tony’s been messaging me every day and she’s nice and relaxed. It’s super she’s made into another group 1.”

Her attention soon turned to Fire Legend (pictured above) as he made it four wins from four starts at Sandown Park before Hooked On Scotch, often touted as the world’s fastest greyhound, joined Black Opium in the Brisbane Cup final.

Hooked On Scotch looked much more comfortable in his victory after a disappointing Albion Park debut a week earlier. He began well to stalk early leader Federal Morgan before unleashing a stunning finishing burst to win in 29.55, indicating that he is starting to return to the form that saw him claim the Sandown Park track record last November.

“It was good to see him come out and get around the way he did.

“He’s taken a little while to settle in up there – he frets a bit being away from home. We said to Tony that he’ll get better each week and I think that since Black Opium got up there he’s appreciated seeing a familiar face.

“The aim was to just make the final knowing he’ll be at his best next week. Black Opium is going to have to be at her best next week because I think Hooked On Scotch will be hot on her tail.”

Back at Sandown Park, Zambora Lion rounded out the night with an all-of-the-way 8 length win in 29.49, the fastest time of the night. The win punched his ticket to next week’s group 1 Vic Peters heats at Wentworth Park in Sydney on 4 July.

Earlier in the night, the well supported Last Hurrah won his third Gr8 Eight race over 595m in 34.23.

Last Hurrah opened the $2.30 favourite for the $15,000 event despite being the dominant greyhound over the distance throughout the series. He was backed into $1.80 by they time they jumped and he didn’t disappoint favourite backers, securing his fourth consecutive victory in a typically gritty performance for trainer Brett Nye.

Last Hurrah will return to Sandown Park next Thursday for the heats of the group 2 McKenna Memorial.

Paw note: Black Opium opened the $4 favourite with tab.com.au for next Thursday’s Brisbane Cup final, however fellow Victorian Simon Told Helen has since firmed from $4.40 to $2.90.

The Vics strike straight back and it's a double for Jason Thompson and caretaker trainer Tony Brett as Hooked On Scotch flicks the nitro switch and powers away with heat 3 of the @SkyRacingAU Brisbane Cup!@RaceQLD @tabcomaumedia @SkyRacingAU @GerardDaffy @Bunny_Brasch pic.twitter.com/Fk44B2td8Z