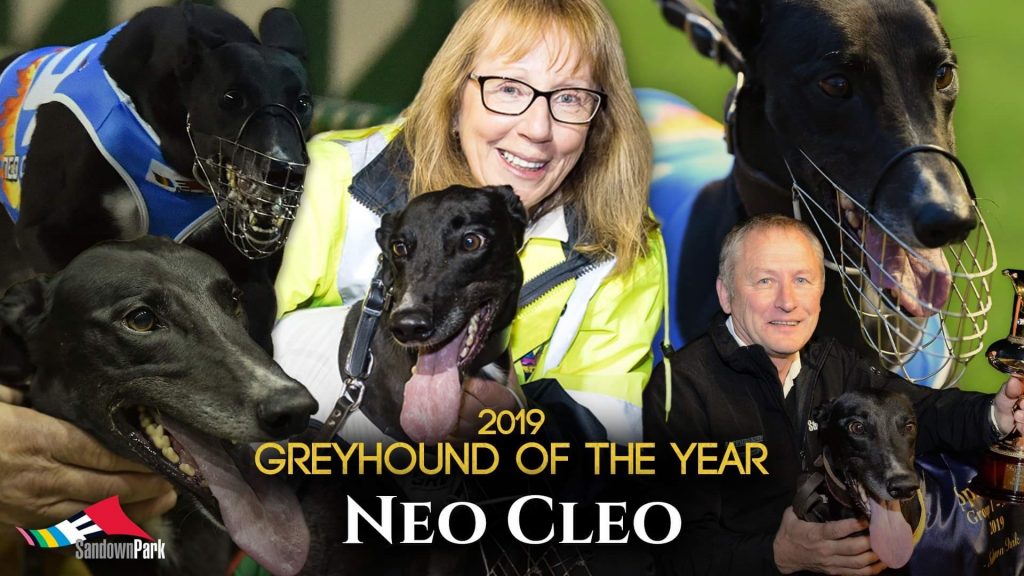 Neo Cleo has been awarded the 2019 Sandown Greyhound of the Year following an extraordinary year that saw her win three group races at Sandown Park.

Neo Cleo won seven of her 14 starts at the track during 2019 including the group 1 Sapphire Crown, group 3 Easter Gift and group 3 Racecallers Speed Star. She also ran second in the group 2 McKenna Memorial, sixth in Maidment Memorial, and sixth in the Speed Star 595, earning $181,165 in prize money. Highlighting her brilliance and versatility, she recorded a best time of 29.23 over 515m, and 33.89 over 595m.

“She was just one out of the box,” said owner and trainer Robert Neocleous.

“She’s a dog you just dream to have.”

Neo Cleo enjoyed a 26 month racing career commencing in July 2017 before retiring in September 2019. Her form peaked between April and July, during which she won five of her seven starts (and ran second in her other two) at Sandown Park, including the three group finals.

“And over both distances,” Neocleous continued.

While there were many highlights through her career, the Sandown run that stood out most to Neocleous was her victory in the group 1 Sapphire Crown, in which she defeated a quality line up including Go Seek Heidi, Crimson Vixen and Zipping Bailey.

“It was a group one race and they’re hard to even get in group 1s, let alone win it.

“It was hot field. She was lucky in the run, she cleared a bit of trouble on the first turn where it’s settled herself down I think in about fourth and then came home and got the first prize at the end of it. It was great.”

Neo Cleo has just begun the next phase of her career, having been mated to super sire Fernando Bale this week.

The Sandown Greyhound of the Year is decided by a vote of the club’s Board, CEO and Racing Manager and Racing Coordinator. Other greyhounds considered for the honour were Hooked On Scotch, Orson Allen, Rajasthan, Tornado Tears and Whiskey Riot.