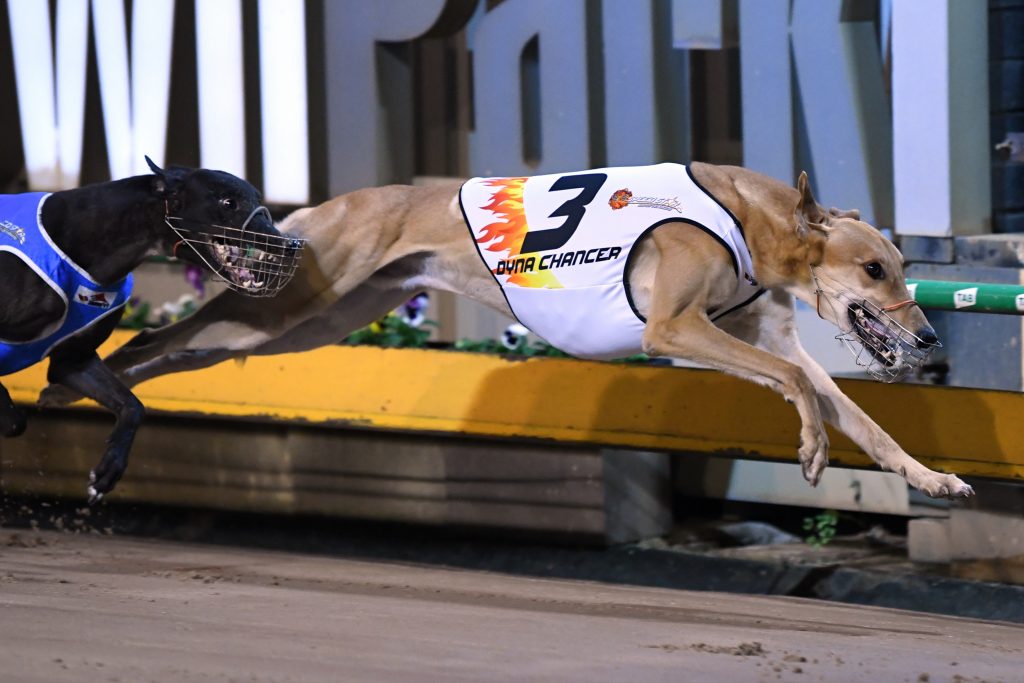 
Trainer Correy Grenfell is hoping Dyna Chancer can not only win on Thursday night, but set a time that will qualify him for September’s Speed Star match race series.

Dyna Chancer, a son of TAB Melbourne Cup winner and 595m track record holder Dyna Double One, is one of the country’s most versatile chasers boasting impressive best winning times of 29.34 (515m), 33.88 (595m) and 41.57 (715m) at Sandown Park. He will jump from box 1 in the 595m Free For All (race 10) after running a fading fourth behind champion stayer Tornado Tears in the group 3 Fireball (725m) at the Meadows last Saturday night, but Grenfell is confident the switch back in distance will suit his greyhound.

“He was a little bit disappointing (on Saturday night), but I think we all know that two 700s in a week is a bit too much for him,” Grenfell said.

“He always goes well in the heat but can’t back it up in the final. That’s the sort of dog he is, he’s a perfect 650m dog but the 700m just takes it out of him. He pulls up fine every week so I don’t think it’ll be too much to worry about dropping back to 595m because his first few splits are always good, it’s his run home over 700m on the short back up that finds him out.”

While acknowledging the quality of the field around him, Grenfell is confident of Dyna Chancer’s prospects in this race and with a clear run, can earn his place in a record fourth Speed Star series (click here for the latest leader board).

“He needs to get through the first corner untouched and sit close enough. The one to beat is Rajasthan but I’m quite confident of being in front.

“Hopefully he can put a time on that will cement his spot. He has gone quick every time there where he’s got a clear run.”

Dyna Chancer has won five of his 14 starts and has contested four group races over the distance, and has also won four and placed in his five other starts wearing the red vest. TAB.com.au rated him the $1.60 favourite when markets opened on Wednesday night.

It’ll be a busy night for Grenfell with six runners engaged. He rates Dyna Chancer his best winning chance, here are his thoughts on the other runners on the card.

Race 3, box 8: Sky Wesley (opening price – $13)
“Drawn badly. We stepped him up over 600m to get the confidence back into him. He’s going pretty well, but from the pink it’s going to be hard to cross.”

Race 5, box 6: Quip Allen (opening price – $41)
“You never know what you’re going to get on the day, she’s a funny little thing. She really needs the rails and she does her best racing in front which I don’t think she’ll get. She’s not much chance”

Race 9, box 6: Hadeel Bale (opening price – $9.50)
“Has the same sort of ability as Ernesto Bale. She is a front runner and does her best racing out in front but she’s in a hard field. She is a good sprinter but she needs the rail to put something on the board. She’s going to struggle from out there.”