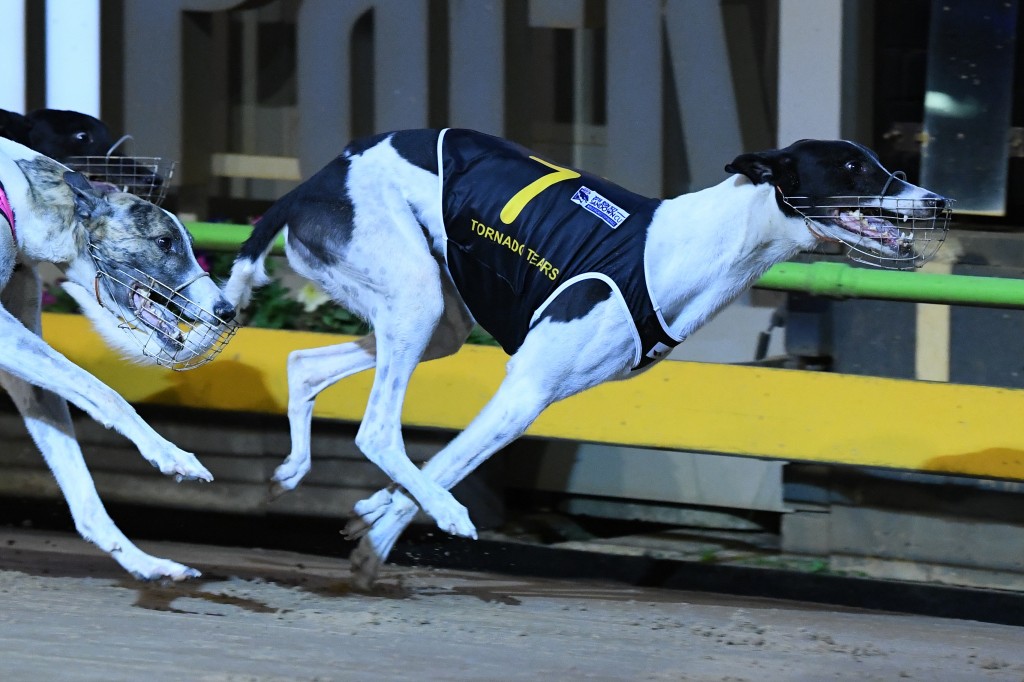 ‘Batman’ prevails in battle of Britton


Tornado Tears showed why he’s regarded as greyhound racing’s next big thing after prevailing in a thrilling finish to the $250,000 RSN Sandown Cup at Sandown Park tonight.

But the well supported favourite – he opened at $26 in early markets before jumping at $2 – was made to earn his victory. Beginning cleanly from box 7, the Robert Britton trained star settled behind kennelmates Benali and Quick Jagger and the trio soon established a gap on their rivals. Tornado Tears made his move down the back straight and appeared set to take control of the race, however he lost momentum attempting to take a gap between the leaders.

Meanwhile, Tornado Tears’ litter brother Rippin’ Sam began to make his move. Spotting the leaders 10 lengths with 300m to run, he unleashed an almighty finishing burst to close to within a length turning for home before finding trouble himself and checking wide on the home turn.

It set up a spectacular finish to the world’s richest race for stayers. Quick Jagger railed under the tiring Benali to take the lead before being reeled in by Tornado Tears in the shadows of the post as Rippin’ Sam powered down the outside to just miss upstaging his litter brother. The three greyhounds were separated by little more than a length on the line and gave Robert Britton the trifecta. Britton’s fourth runner, Benali, finished 5th.

“It was nerve racking from the start of the week with four dogs in it. To be quite honest, I was glad when tonight came and could get the race run,” said Britton following his historic victory.

“I thought Tornado Tears got a great run into the race and I thought that off the back he looked a winner, then he got jammed up between the two leaders. As I switched to watch Sam, he went up in the air, and from that point on I was trying to work out where my dogs are. It was a nerve racking race.”

Affectionately known as ‘Batman’ due to his distinctive markings, Tornado Tears is fast developing an enthusiastic fan base with some pundits believing Tornado Tears has the potential to be a once in a generation stayer. Despite his relative inexperience over 715m – his RSN Sandown Cup victory was just his third attempt over the ‘half-mile’ – he has already recorded the 2nd and 4th fastest times over the distance and has claimed the sport’s greatest stayers race. While Britton refused to be drawn on comparisons to previous champions, he was excited by what lay ahead of this son of Fernando Bale.

“I think he’s an outstanding dog. We saw in his first couple of runs where he went 41.20 and 41.30 that on a fast night and with perfect conditions he probably could break the track record (41.17). But I always say with dogs you measure how good they are when you look back on their career, not forward. It was like that with Fanta Bale, I never raved about her until she got near the end when we could say she’s done it all. This bloke is the same.

“I was really pleased with the way he pulled up. I saw him on the dais and he was much, much better than he was at his first attempt which tells me he’s becoming more seasoned as a stayer.”

The win was Tornado Tears’ fifth in a row and 10th from 17 career starts, and the $175,000 winner’s purse took his career prize money beyond $235,000. At just 27 months of age, Tornado Tears and his litter brother look set to dominate the stayers scene for some time to come.

Britton has long been regarded as one of the country’s premier conditioners and is no stranger to success at the sport’s highest level, however leading home the trifecta in the nation’s premier staying event is a particular highlight of his training career.

“It’s massive. The Sandown Cup to me is the ultimate for stayers and always has been. It’s not easy to win – I tried for probably 40 years and it was only last year we won it for the first time. It’s a tough race to win.

Britton will now aim for the group 1 Gold Cup at Albion Park in Brisbane for his burgeoning team of stayers.

The RSN Sandown Cup was the final leg of the club’s group 1 triple header that had earlier seen exciting youngster My Redeemer overcome early trouble claim the Harrison-Dawson, while Elevated gave Harry Manolitsis his first group 1 win when victorious in the Sapphire Crown.

Tornado Tears puts the polish on what’s been a remarkable lead up to this race.

Tornado Tears is the winner of the 2018 @RSN927 #SandownCup at @sandowndogs after holding off kennelmates Rippin’ Sam and Quick Jagger. pic.twitter.com/PUkkk6skZy