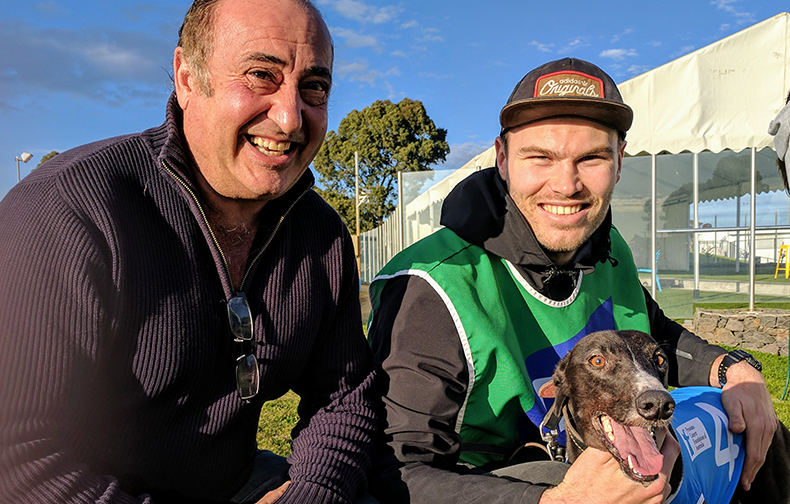 
Owner Frank Sampieri was over the moon when Angel Dash took out the last leg of the quaddie today at Sandown Park.

Angel Dash jumped well and was in pursuit of leader Metallic Zip throughout the early stages. Metallic Zip held a sizable break turning for home but it wasn’t big enough to hold off the fast finishing Angel Dash. The final margin ½ a length in 29.81.

“Too good, too good!” said an ecstatic Sampieri.

“She had a month off due to a minor illness and the Sharp family have done a great job getting her back to her best. On the turn she was 2nd and I thought she was going to run 3rd. I couldn’t believe it when she got over the top of them in the last 10-20 metres.

“Initially I said I’ll only get one picture (winning frame), now I’ve got about 9 of them and have run out of room!”

Sampieri’s was involved in greyhound racing as youngster however spent a long time away from the sport following marriage and other commitments.

“I used to own dogs when I was young, then I got married and had kids. I met Robin Mayes, he was stirring me up for a while saying ‘are ya going to buy a dog with me?’. I eventually told him to go ahead and I’ll hand over the money.

“He went and did it and the rest is history. We’ve had our current crop of greyhounds for a year now, to see them as pups to where they are now is amazing.”

Sampieri is a regular at Sandown Park attending whenever he has a runner engaged.

“It’s fantastic. I love coming out to the dogs, it’s great!”