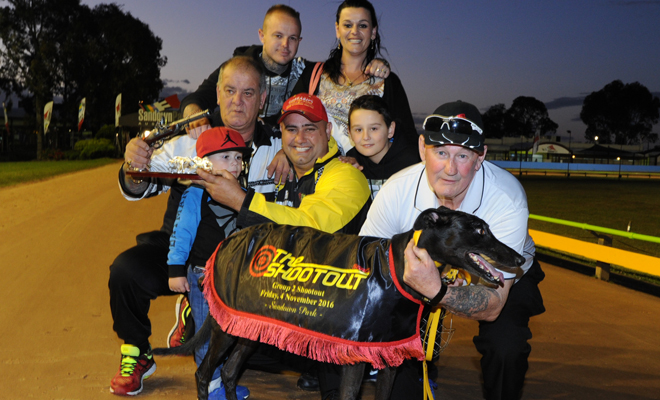 In one of the most eagerly anticipated Shootouts in the 16 year history of the race, Zambora Brockie was backed into favouritism and didn’t disappoint his legion of fans. He jumped brilliantly from box 5 to narrowly cross Outside Pass at the first turn and from there was never headed, securing the $50,000 winner-takes-all prize in 29.167 seconds. Outside Pass ran a gallant second 3¼ lengths adrift, with Dundee Osprey and Worm Burner rounding out the four dog event.

“There are races that I really want to win and the Shootout was one of those on the list. To have my first starter in the race win is just amazing.”

The win also brought a sense of relief for the former New South Welshman. Zambora Brockie entered the Shootout with four group wins to his name and was dominant through winter with nine consecutive wins. However after a string of narrow defeats and a month off racing followed by a modest return in the group 1 Topgun, some had begun to question Zambora Brockie’s standing as one of the country’s elite chasers.

Such criticisms riled the affable Azzopardi, but he was confident his charge was close to his best after a strong win on a slow track last week.

“Things don’t get to me at all really but I was getting a little bit upset with people bagging the dog.

“He had a little fibula injury, it’s a tricky injury that just took a little bit time to get him right. I knew in my heart that when he came home in 10.59 on a slow track last week that he was getting back to his best. I was telling all the people at home, that they’d have to run pretty quick to get him.”

So confident was Azzopardi that he had no hesitation in backing Zambora Brockie to win the group 2 feature.

“I got $3.20 on him so I got a nice little bonus in the account,” he said with a laugh. Zambora Brockie started the $2.50 favourite for the race.

“I always have confidence with him because he’s such a great dog. He is a champion no question and he goes onto a Shootout honour roll full of champions and great stud dogs. I’m really proud of him.”

The Shootout was the final hit out for Zambora Brockie ahead of Friday night’s TAB Melbourne Cup heats. It was the 27th win of his career and the $50,000 first prize catapulted his career earnings to $419,133 – figure he will double with a win in the TAB Melbourne Cup final on Friday 18 November.

“I know I’ve got him on target, but to win the Melbourne Cup – that’s a whole other story. You’ve got to win a heat to get in the final and they are hard to win. But win lose or draw I’m proud of the dog. He’s my champion and nothing will change that.”

Watching all this racing @sandowndogs gets me giddy with anticipation about calling the next 2 Friday nights! How good Brockie?