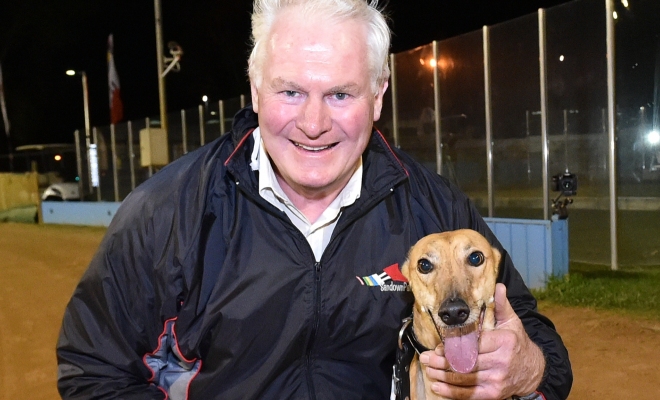 Excitement Ringin ahead of Sandown Cup


Gerry O’Keeffe will be aiming to be the third hobby trainer to claim a group 1 final this May carnival when Bells Are Ringin lines up in the RSN927 Sandown Cup this Thursday night.

One the same night that Steve Creighton and Geoff Scott-Smith claimed the Sapphire Crown and Harrison-Dawson finals, Bells Are Ringin won her RSN927 Sandown Cup heat to cement her spot in the world’s richest staying race. Despite her moderate time of 42.31, O’Keefe and his team were over the moon with the run.

“Happy is an understatement, the owners and the two of us as trainers Kelvin Jones and myself we were both ecstatic,” said O’Keeffe.

“She does what she does – she’s only 24.5kg – she jumps quickly and she’s as strong as can be. We were absolutely delighted she hung on to win even though the time was steady.

“To be in a final like this is just so exciting.”

O’Keefe only returned to greyhound racing two years ago after 28 years absence from the sport.

“I was involved with greyhounds many years ago when I was at university. It was a big commitment at the time so I gave it up. I retired from work two years ago and was looking for an interest that would keep me both mentally and physically active.”

Bells Are Ringin was bred by O’Keeffe’s son in-law Glenn Pask and is a member of a litter that includes Bill Collins Speed Star winner Blazin’ Bomber. Despite being related to one of the country’s premier sprinters, O’Keeffe remains realistic about Bells Are Ringin’s chances on Thursday night.

“I’m living the dream being in a group 1 final. The richest staying race in the world, how could you not be excited to be involved in it.”

The group 1 RSN927 Sandown Cup highlights a stellar card of racing this Thursday night, click here for fields and form.