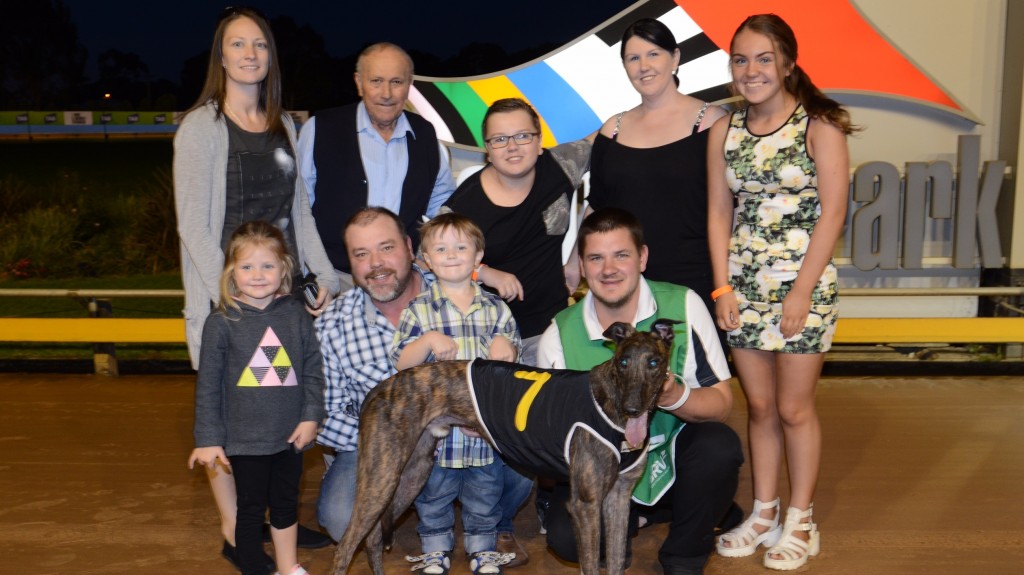 
Nick Kosky had the thrill of a lifetime at Sandown Park tonight when Maverick Thunder gave him his first city winner.

Maverick Thunder began fairly but with a clear run mustered to trail only Blue Westmead through the first turn. Down the back, Maverick Thunder closed in on the lamp lighter and despite running wide on the final turn, raced away to win by a length in 29.78 seconds.

“We’ve only been here a couple of times so to win one, I’m over the moon.”

Many of Maverick Thunder’s owners were track side to share in the victory, and Included in that group was Mark Cartechini with whom Kosky purchased his first greyhound two years ago.

“We bought our first two dogs together, and started training them then,” Kosky continued.

“We’ve only got a small team, I’ve got five dogs and Mark has two. We do everything together, travel everywhere, trial, races, you name it. It’s a lot of fun”

The win was Maverick Thunder’s fourth of his career, and the $6260 winner’s cheque more than doubled his career prize money. While confident his charge would shape up to city class, the win was a long time coming.

“We thought early on he’d probably make it in town but it’s been a bumpy road getting here. He hasn’t had a lot of luck in races, and has had a horrible run of box draws. I think about half of his starts have come from the squeeze boxes.

“Tonight we had to get around the first turn and stay out of trouble, and once he did – wow! I think we’ve only won one on a Sunday here so yeah, this is our first city win. I’m stoked, absolutely stoked.”

Kosky was one of 12 different trainers across Victoria to lead home a winner at Sandown Park tonight.