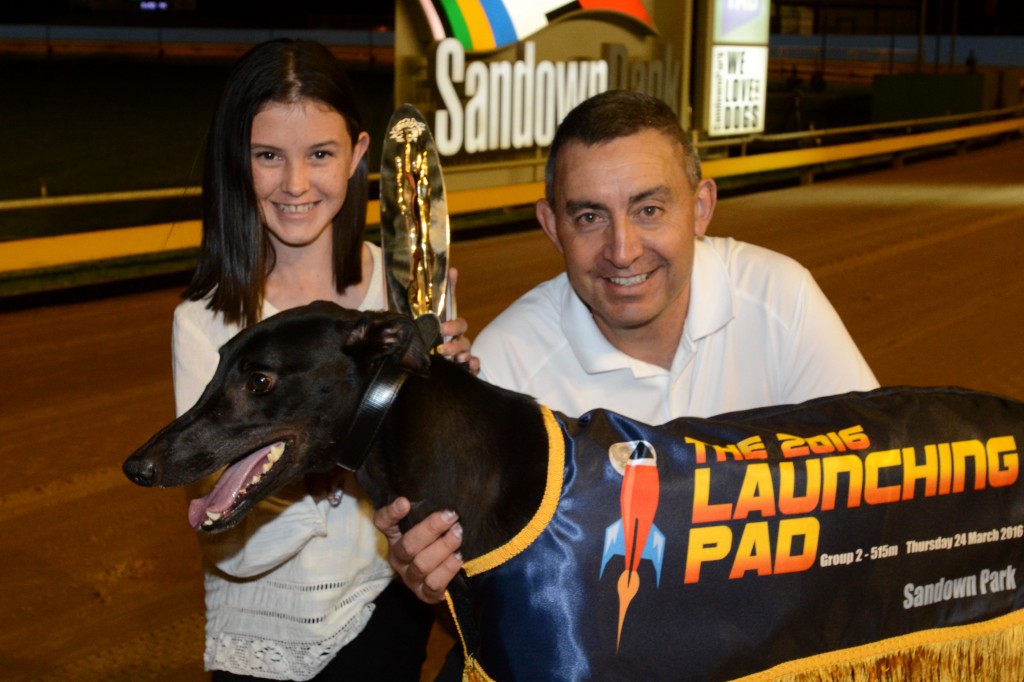 Buck Forty ($4.70) drew perfectly in box 1 for the Launching Pad and took full advantage of his plum box draw. Race favourite Major Jackpot ($2.20) began well from box 2 but moved to the middle of the track to allow Buck Forty space to muster speed and rail beneath Pagan Midnight ($19.10) to sit in second place through the first turn.

Down the back, Buck Forty spotted Major Jackpot a three length lead but soon began to reel in the lamplighter, drawing level on the turn for home and powering to the line to win by 4¾ lengths in a slick 29.23.

“It was one of those races where box 1 was going to be a big advantage,” said an elated Jason Thompson after the race.

“I said it all week, but had he drawn outside of box 4 he may not have even filled a placing. You’ve just got to make the most of the good draw and it was a really good draw once he began safely.”

Buck Forty entered the series with just one win from seven career starts. Despite his modest record, Thompson picked out the Launching Pad as a target six or seven weeks prior and set in motion a plan to have the greyhound at his peak for the final.

“Being a three week series you don’t want to have your grand final a week early. I gave him a 600m race before the series to toughen him up and we worked him hard for the heats and semi final before backing it off and freshening him up for the final. He’s got limited speed and we had to get him going as quick as he could to the winning post and that’s what he did off the good draw.

“You can try that routine 20 times and it mightn’t work but it worked tonight.”

Despite the $150,000 first prize catapulting Buck Forty into the national spotlight, Thompson is keeping the win in perspective and has no immediate plans for him.

“He may go to Queensland for the Derby in a few weeks. We got away with a good win tonight against restricted win dogs because of the box draw. He’s not ready to take on open grade dogs at this stage anyway.”

Earlier in the night, Dalgetty broke his Sandown Cup duck with an impressive all of the way win in the listed Easter Gift.

Sent to the boxes the $3.40 second favourite behind last start track record breaker Unlawful Entry ($2.20), Dalgetty began well to lead through the first turn and was never headed, accelerating down the back and racing to a four length win in a very fast 29.09.

The win was particularly satisfying for Thompson. Six months ago, Dalgetty won the Geelong Cup and Silver Bullet before suffering a serious injury which sidelined his kennel star for 10 weeks. He resumed racing in January and has come back a better dog having won the group 1 Temlee in February.

“Since he’s come back he’s just really hardened up. He’s a professional, I think that’s the best term for him. Good draws or bad, he’s just been a lot more reliable and he’s putting in and giving 100% every time he goes around.

“There might have been a few doubters that he wouldn’t perform as well at Sandown but he trialled sensationally here on the weekend and he’s as home here as he is at any other.”

The Easter Gift was Dagetty’s fourth black type victory and the $25,000 first prize elevated his prize money to beyond $230,000. There could be a lot more in store in coming months.

His winning time moved him into second place on the leader board for the Bill Collins Speed Star and has all but secured his berth in the $61,000 match race series.

“It’s definitely on the radar. He’ll go to Perth for the Perth Cup but we’ll be back here in May for the Speed Star.”

Thompson will be aiming to continue his good fortunate in Sydney on Saturday night when he boxes Moreira in the final of one of the country’s premier events, the group 1 Golden Easter Egg at Wentworth Park. Asked for a lead as to Moreira’s chances, Thompson issued an ominous warning to his rivals.

The Launching Pad was the feature event of one of the club’s biggest events of the year, the Easter Kids Fun Night. Hundreds of kids poured into Sandown Park for a fun night of activities including becoming a greyhounds owner for the day, Easter bunny races, Easter Egg hunts, rides, games and activities.

Buck Forty storms to victory in the Launching Pad