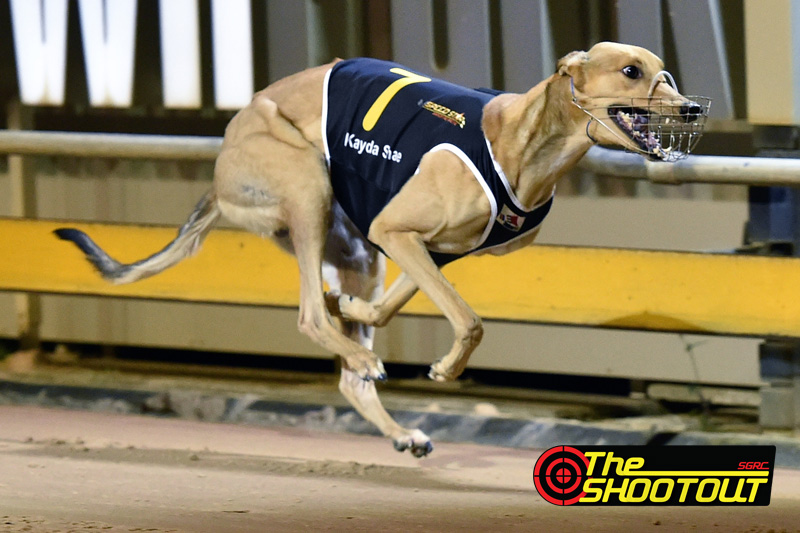 
The Sandown Greyhound Racing Club today received six nominations for the $50,000 winner-takes-all group 2 Shootout to be run on Friday 6 November.

Brad Hill Billy, Dyna Double One, Fever Pitch, Kayda Shae, Secret Spell and Sulzanti will are all vying for a berth in the four-dog spectacular.

Open to the best four greyhounds suited to the format as determined by Sandown and Greyhound Racing Victoria, the Shootout has become one of the most sought after prizes in greyhound racing. The unique four dog format boasts some of the fastest greyhounds to grace the track, including track record holders Bond and Bekim Bale, and all time greats Bombastic Shiraz, Whisky Assassin and Xylia Allen.

The two fastest greyhounds at Sandown Park this year – Fernando Bale and Smart Missile – are notable absentees from the nomination list. Andrea Dailly has opted to bypass the Shootout with super star Fernando Bale in favour of preparing for the heats of the TAB Melbourne Cup the following week, a series that is likely to be the world’s highest prize money earning greyhound’s race track finale. Speed Star winner Smart Missile will also bypass the race after picking up an injury in a Melbourne Cup Prelude last Thursday night.

The final field and reserves will be announced on The Catching Pen on Sky Racing 2 at 6.30pm on Tuesday 27 October. The box draw will take place at Sandown Park this Thursday night and will be streamed through www.sandowngreyhounds.com.au.