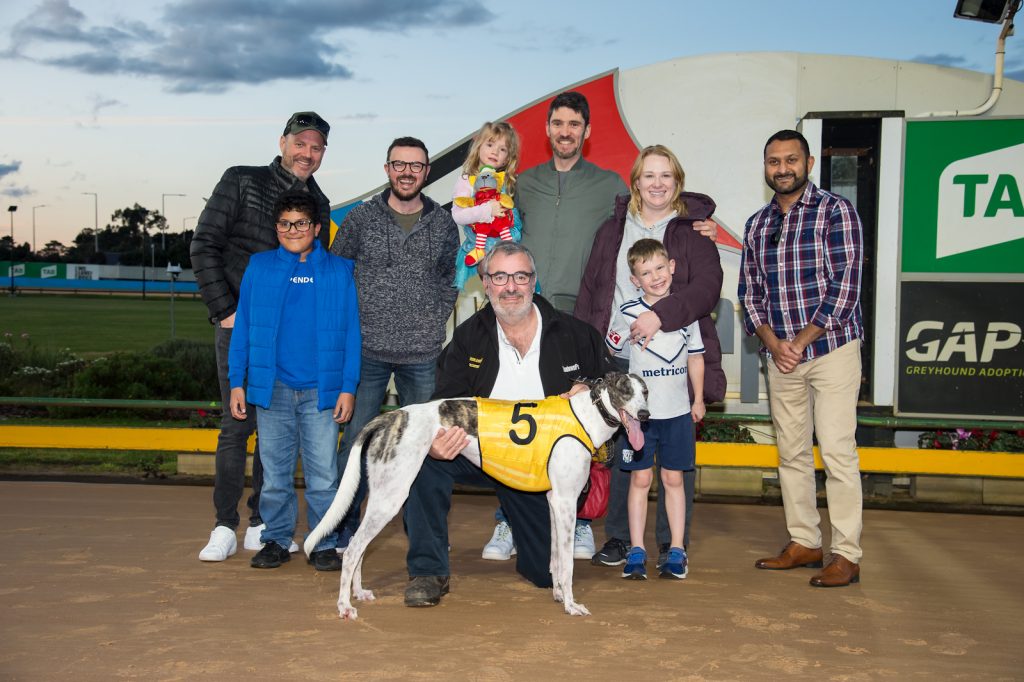 It has been a brilliant three weeks at HQ for Harry Manolitsis’ up-and-coming superstar Revolution.

After a dominant seven-length victory on his track debut, the talented son of Fernando Bale and Elevated backed it up with a flying 29.20s win last Sunday.

Revolution returned to the track on Thursday night for his first metropolitan meeting where he finished second behind Group 1 winner Zippy Tesla in a tricky race under tough weather conditions.

Seasoned trainer Harry Manolitsis – who knows a thing or two about racing success – was delighted with the effort despite the result.

“I’m extremely happy with what he’s doing at this stage of his career,” he said.

“It was a very tough race. He got a nice hit out of the boxes, managed to zip through, then copped another hit and yet he still found the front. I was so pleased.

“When I realised Zippy Tesla was on his tail – a dog who can run home in track-record splits – I had a feeling it wasn’t going to end in our favour. To get that result under those circumstances was amazing. I walked out of there as happy as I’d be if he won.”

This strong run of form comes at a good time for Manolitsis and Revolution who will return next week for the Victorian Heats of the National Sprint.

“The Nationals were always the plan going forward. He lacks a bit of race experience compared to other dogs, but I think he’s proven over the last couple weeks that he can definitely hold his own.

“He pulled up well this morning and didn’t seem to take any effect from last night. He appeared to be in a very bright mood.”

Manolitsis has bred and/or trained multiple Group 1 winners in his time, including Get It Gizmo (2019 Topgun), Moreira (2016 Golden Easter Egg) and Elevated (2018 Sapphire Crown).

When asked where Revolution ranks amongst his past dogs, Manolitsis gave very high praise.

“In terms of quality, he’s right up there with the best I’ve had. I’ve been lucky to have many top greyhounds and, ability-wise, he could probably match it with them.

“He’s more of a speed-to-the-front type, whereas most of the Group-winning dogs I’ve had were much stronger. Both are great qualities to have.”

Elevated, who owned a superb 29.12s PB at Sandown, had another terrific night as a Dam.

Levitation – a full sister to Revolution – scored another convincing win over the 595m as half-brother Madigan continued the impressive start to his career with a win in Race 2.

“She (Elevated) is such a well-respected dog. I had great hopes for her breeding career post-racing and it’s starting to pay off with the results.”

Victorian Heats of the National Sprint series will run next Thursday August 4.