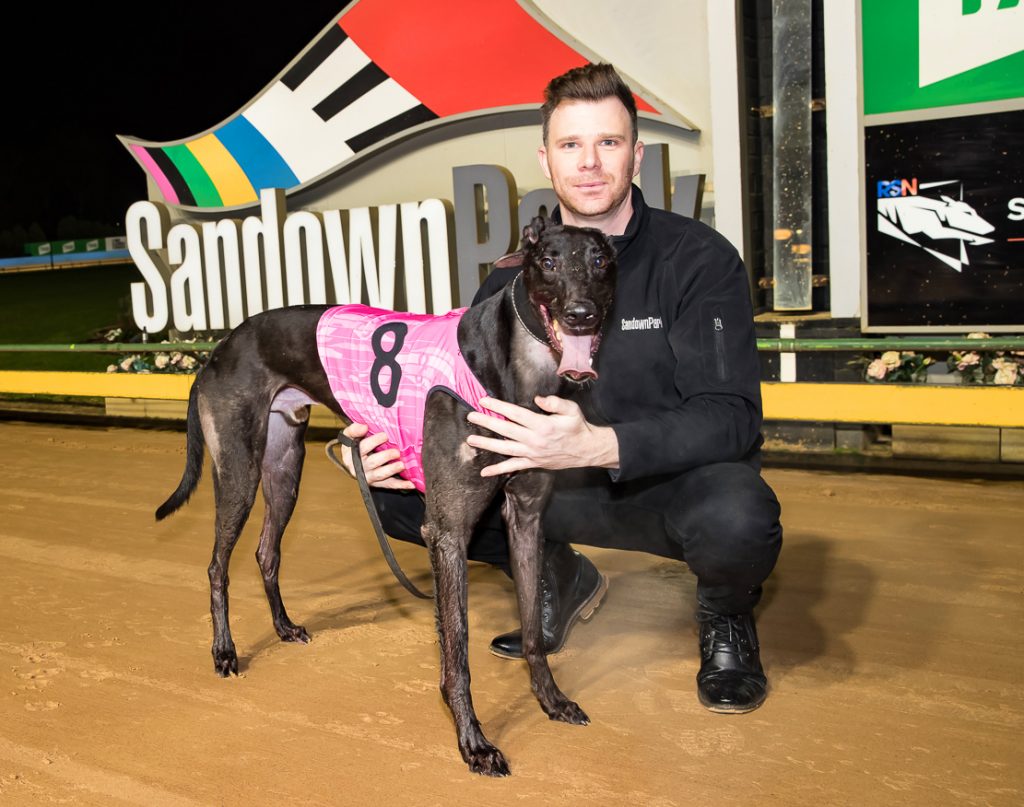 Fairly away from the boxes, Aston Merit flaunted his devastating speed to muster up alongside Wedding Or Baby before taking over on the back straight and holding on to win by a nose-length.

“He dug deep and got the job done for us,” he said.

“It’s always tough from the pink first up. I come here every week with seasoned dogs and from the pink – even if they’ve had 10 or 15 starts here – it’s never easy. He had to work very hard to the first corner and down the back straight.”

Aston Merit burst onto the scene with a set of quick runs at Healesville which saw him competing in a Group 2 final at just his fourth start. However on his first attempt at a round, city circuit he did not finish the trip – despite leading for three quarters of the race.

Since that setback, Aston Merit and Team Sharp have put in tremendous work behind the scenes to build up fitness and they are beginning to reap the rewards.

“Early days he really struggled to run 400m. There’s been a few things we’ve had to work on. Race fitness is a big thing with him, and he started racing over two years old so it’s not easy.”

Aston Merit’s win on Thursday was uncharacteristic from recent runs.

With only an average getaway, Aston Merit surprised connections by chasing down the leader and holding on for victory.

In most of his 10 victories to date, he has speared the lids and lead the entirety of the race before slowing down towards the finish – just as he did in last month’s Group 2 Geelong Gold Cup final when second behind Yozo Bale.

Thursday night’s win is a credit to the training efforts of the Sharp team and the competitive nature of Aston Merit himself.

“Everyone at the kennels has had a bit to do with him and his preparation. He’s not your everyday dog – he’s got a bit of work involved with him. It’s been a great effort by the team to get him up to race at this level.”

“I think he can still improve at least four to five lengths down the back straight.”

“He’s made three Group finals in 25 starts so hopefully he can draw inside here next week and spear the lids.”

“He’s a very chilled dog at home. He travels in a compression suit but he’s actually a very chilled animal. In saying that, once he gets out of the car he knows where he is and he’s an absolute bull.”

The Harrison-Dawson Heats will run alongside Heats of the Sapphire Crown next Friday May 13.

Heats of the Sandown Cup will run on Thursday May 12.

All three Group 1 finals will run on Thursday May 19.

All of Team Sharp’s hearts truly pounding watching this race. Means so much more seeing this boy win with all the issues he faces.

His first win in town and Harrison Dawson up next. https://t.co/jzdR33rAoo

Aston Merit (8) holds on to win first-up at Sandown Park.