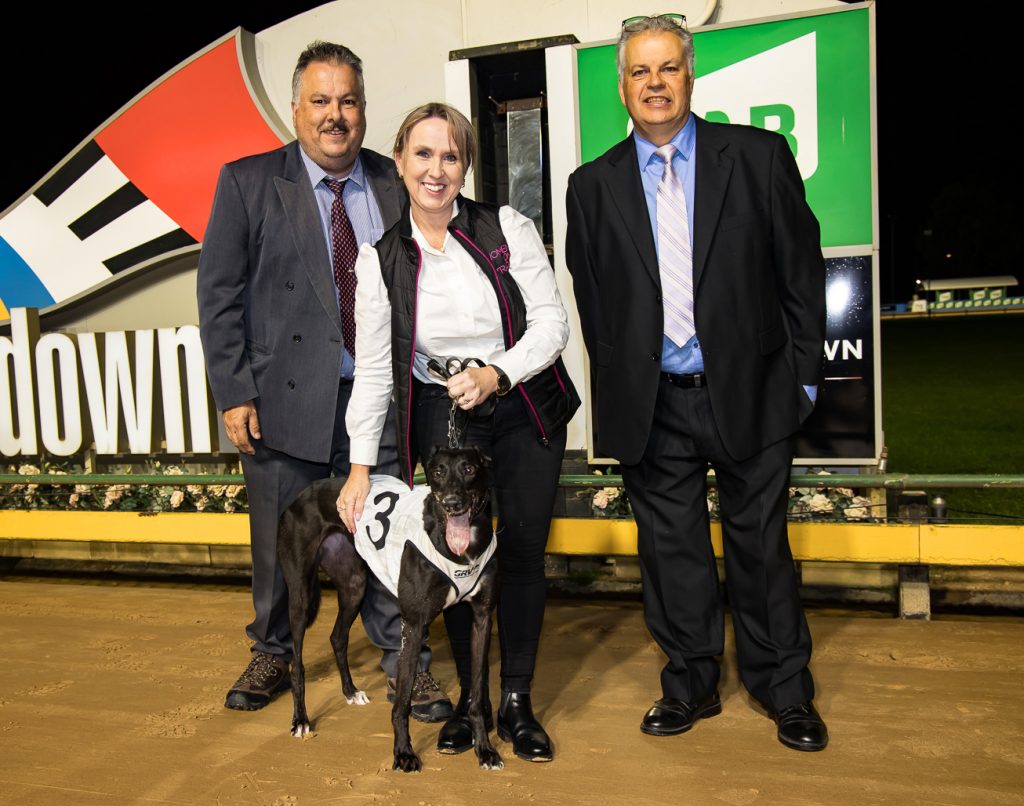 She left fairly from box three and camped on the heels of Fernando’s Quest for the duration of the first lap. With Fernando’s Quest tiring Collinda Patty took full advantage, exploding away to win by six lengths in a time of 41.41.

The victory sneaks into the top 15 fastest ever over the 715m.

“She really did us proud!” she said.

“I thought she would go too hard too early but she just pulled away from them at the end. She ran a really smart staying race.”

Collinda Patty announced herself at Sandown last year with a 29.31 debut run over the 515m when almost reeling in Koblenz who was on a 10-race win streak.

On her first attempt at the 595m she smashed the track-record and both Steph and the Thompsons knew a staying career was on the cards.

“When we knew she was running the 600m really strong, that was the initial step.”

“600m to 700m is a big change, though. Some dogs make it and some really struggle. That’s why last night lost of people were really interested to see if she could actually run it out strongly.”

“The Sandown Cup was always the final goal, but until she actually ran out a 700m like last night it wasn’t set in stone.”

Steph finds herself in a position of fortune with another Sandown Cup hopeful on the rise in the Thompson kennel.

Collinda Lady has burst onto the staying scene and in just her tenth start smashed the 680m track-record at Geelong.

“She hasn’t had a lot of race experience but Matilda’s (Collinda Lady) racing style has always shown she will run the distance. It’s really exciting to see so early on in her career that she could feature in a big Group race.”

“It’s a real ‘pinch me’ moment to not only have one dog, but two dogs who have a real shot at winning.”

“With staying races there’s only a select pool of dogs that can actually compete so when you’ve got two in the mix it really increases your chances.”