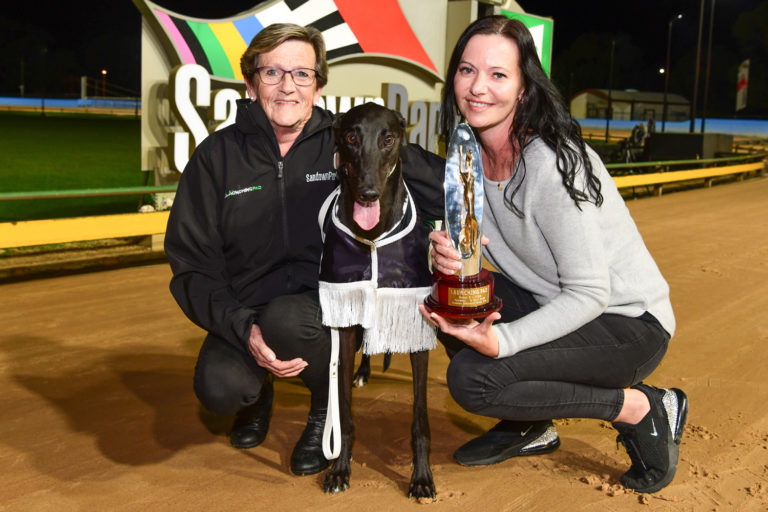 Potential superstar Wow She’s Fast lived up to what race caller Daniel Hibberd termed “the bravest name in racing” once again on Thursday night, with a scintillating victory in the Group 3 Launching Pad (515m) at Sandown Park.

Trained by Jackie Greenough, whose husband Kel won the Launching Pad in 2004 with Legends, Wow She’s Fast clocked an airborne 28.93sec, joining the exclusive sub-29 seconds club and becoming the ‘fastest’ female ever over the 515m course.

Wow She’s Fast burst onto the scene at the same venue last September with a jaw-dropping debut, scoring by a staggering 27 lengths in 29.09sec.

The daughter of three-time G1 winner My Bro Fabio then etched her name in the history books in December at The Meadows, winning the inaugural TAB Phoenix and it’s massive $750,000 winner’s purse at just her seventh start.

The Greenoughs then opted to wait for the rich Launching Pad series, restricted to greyhounds with 1 – 6 wins and no more than 30 starts, and the decision paid off handsomely.

The wide draw was the question mark surrounding Wow She’s Fast, but it proved to be no concern whatsoever as she exploded out of the boxes and found the front with a blinding 5.04sec first split.

It was a matter of time and margin from that point, and both were ultra-impressive, as Wow She’s Fast romped to a 6.63L victory over Plaintiff, with outsider Samona ($56) running third.

“It has been a bit of a challenge, to be honest, waiting all that time and trying to get the fitness right and try to have her peak on the right night.

“There’s been a few headaches trying to get it right but fortunately it worked out.

“We had such a long wait, we had to try to balance it out, so we had her peaking coming into the 500s.

“If I’d given her a number of harder runs, I probably would’ve had her flat by now, so I had to go to Warragul and do 400s and things like that, just to keep her fitness and try to get the speed up and gradually build the strength back and get the timing right.”

Wow She’s Fast has now won nine of her 12 starts, including seven from nine at Sandown.

The Launching Pad’s $150,000 bounty boosted her earnings to $938,070 and a place in the sport’s all-time top ten prizemoney earners, incredibly having only turned two on February 13.