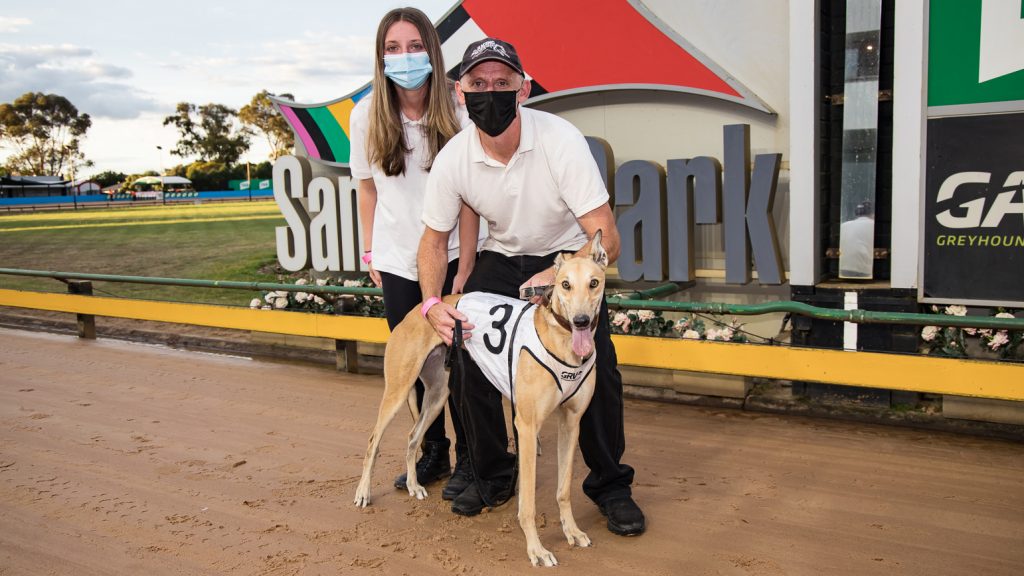 Passion and enthusiasm at the Golden Ratio

“It’s unbelievable really, considering we only started about four years ago. We’re pretty clueless so to get a city win is super exciting,” laughed Broadley.

It came courtesy of Golden Ratio, or ‘London’ as she’s known at home, who surged late to win at healthy odds.

The team have trained a handful of greyhounds in the past but the experience with Golden Ratio has further fuelled the passion of them and their families.

“Lady Bang Bang did really well for us but Golden Ratio is about six lengths quicker. I’m at Healesville today for a Tier 3 meeting and we have Kalbarri running, I’ll probably get just as excited if he wins as I was last night.”

Their acquisition of Golden Ratio was unplanned. They visited a greyhound who they were thinking of training however wasn’t the one they went home with.

“Emma (daughter) and I went to look at a greyhound that was advertised, while we were there one in the yard next door took our eye and it was London. Emma always wanted a fawn greyhound, so we took her.

“Before we got her she wasn’t showing much interest in chasing and wasn’t too far away from being adopted to a home. She’s really come out of her shell and loves it.”

Broadley and Smullen are neighbours and both have residential properties in Aspendale.

“I’ve got London and two of Lady Bang Bang’s pups, Steve has Kalbarri and two Lady’s pups as well. It’s not a conventional training set up, they’re around the kids all of the time and we’ve got an Irish Terrier that plays with them.

“They get taken on a lot of walks around the local area and go to the cafe. The pups have completely trashed the back garden but they’re going well.”

Broadley is a school teacher but has reduced his commitment to put more time into training greyhounds.

“I’ve gone down to three days per week and that’s made a big difference. If my wife and I both worked full time it would be difficult to do what we do.”

Back in 2019 Lady Bang Bang produced the team with their first win as trainers – click here for the story.