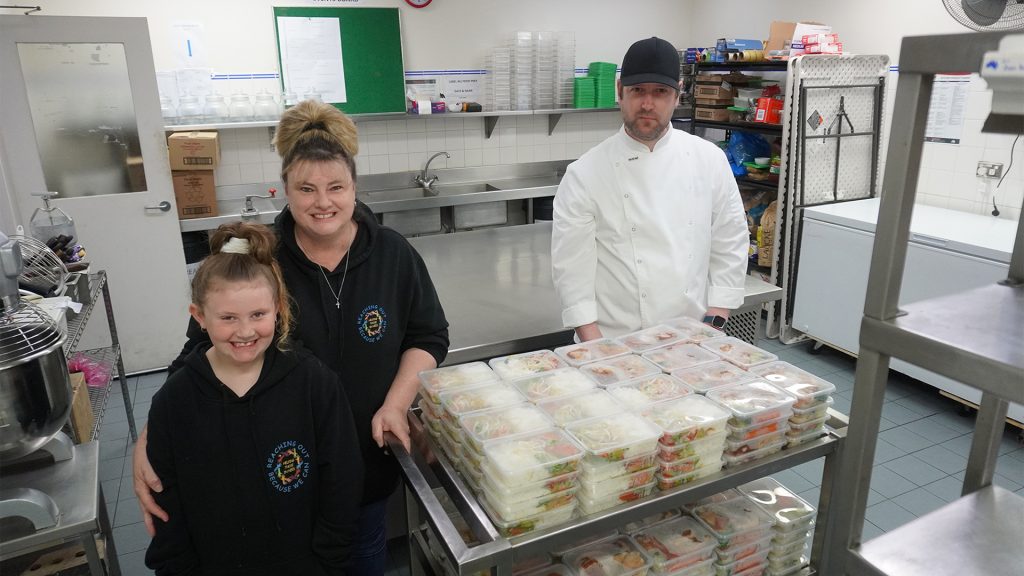 Sandown Greyhounds’ partnership with local charities Reaching Out Because We Can and Servants Of The Two Hearts reached a significant milestone this month with the 10,000th meal donated to the local community.

The relationship between the charity groups and Sandown Greyhounds began during the second lockdown of 2020. Rather than disposing of stored food, the club reached out to the City of Greater Dandenong and were directed to the two charities who help distribute meals and other items to members of the community in need.

“We are so privileged to be partners with Sandown Greyhounds. Thousands of meals are cooked by them that we personally deliver to our friends out there – we call them our friends because to us, they are,” said Elisa Mineo (pictured with daughter Sierra and chef Steve Rivers – before mask requirement) of Reaching Out Before We Can.

“Working together with Sandown Greyhounds has given many people that meal they would never have had.”

“We help people from all walks of life. No discrimination regardless of culture, nationality, age or gender. We don’t look at a person for the situation they are in at the present, we see a human being that needs us and we are there with open arms,” said Sister Margaret Mary of Servants Of The Two Hearts.

The groups are planning a fundraising event in the coming months to raise money for their program. Sandown Greyhounds has donated the venue for the event and is keen to speak to anyone who is willing to contribute to the fundraiser.