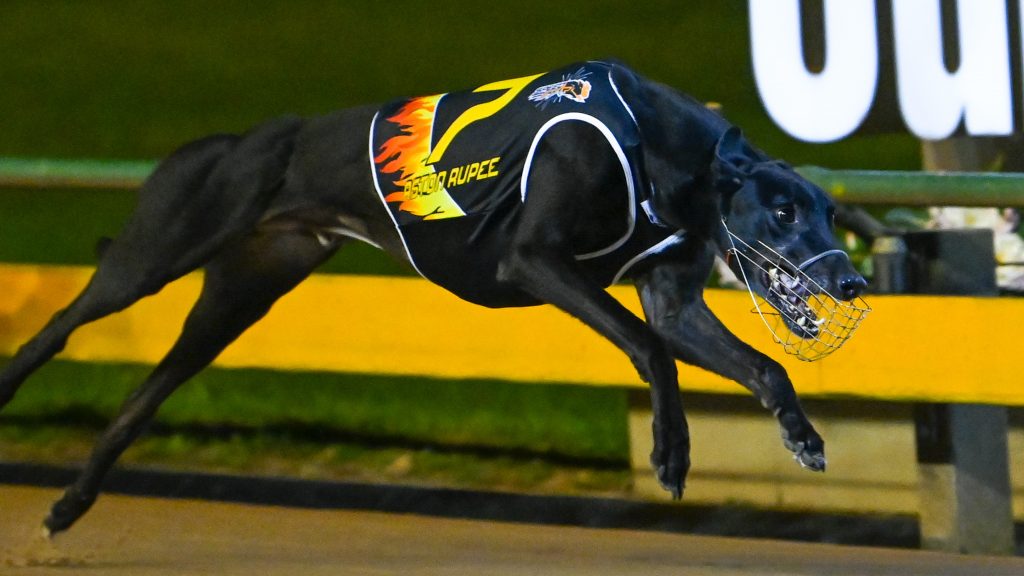 The Glenn Rounds trained youngster came into the series as the top seed courtesy of his eye-popping 28.927 qualification trial set 10 days earlier. He drew his brother Aston Fastnet in the final match of the night, and the pair took the track looking to eclipse Equalizer’s time of 29.158.

Beginning cleanly to take full advantage of is inside draw, Aston Rupee clocked splits 5.06, 18.67 before powering home in 10.385 and announce his arrival as one of the sport’s hottest prospects.

“He went beautifully,” said Rounds after his win.

“I was very proud of him. You just put him in the box and the dog and, well, he’s just a ripper. I have had lots and lots of dogs before and dogs at this level, it’s rare, very rare.”

Just five weeks past his second birthday, Aston Rupee has now won 8 of his 14 starts and over $100,000 in prize money.

Rounds will now target the group 1 Vic Peters at Wentworth Park before a tilt at the group 1 Maturity at The Meadows in July with the TAB Melbourne Cup – for which he is the $14 favourite – the long term goal.

The top seed showed his recent exploits over 715m had done nothing to slow him over 595m, running the fastest first split before winning in 33.772. The time was just under two lengths outside of his qualifying time but still good enough to be the second fastest time run in a match race over the distance and eighth fastest ever.

Bounce Back and Fractured filled the minor placings after winning their respective matches, while Nangar Rust defied a big plunge on his opponent Freda Rocks to take out the other match.

The pair run 1-2 in the Listed Cup Night Stayers on Sandown Cup night with Hank The Hustler prevailing by half a length. However Five Star was able to flip the result in the match race format, much to the delight of trainer Paul Abela.

“Delight is an understatement mate,” he said.

Abela has long held a high opinion of the dog and had high expectations of him entering the RSN Sandown Cup series but was thwarted by bad luck.

“We were pretty confident going into the Sandown Cup but he just got jammed up at the first corner (in his heat) and we missed out, but this is just as good I’d say.”

Each match winner picked up $5000 with another $10,000 going to the fastest time overall. Five Star was one of the big firmers in betting on the night, and Abela admitted than Five Star’s victory – his first in 12 attempts at Sandown Park – came with a little bonus.

“We were pretty confident to be honest. We got some money out of it”

In the other matches over 715m, Sir Truculent made the most of his opportunity following the scratching of Kenny The Brute to win his match and take second place overall; Here’s Tears took out the night’s opening match; while Weblec Haze caused the upset of the night by winning the final match of the series behind RSN Sandown Cup placegetter Tyler Durden.

Aston Rupee (7) proves he is the fastest of them all, winning the Bill Collins Speed Star in 29.055