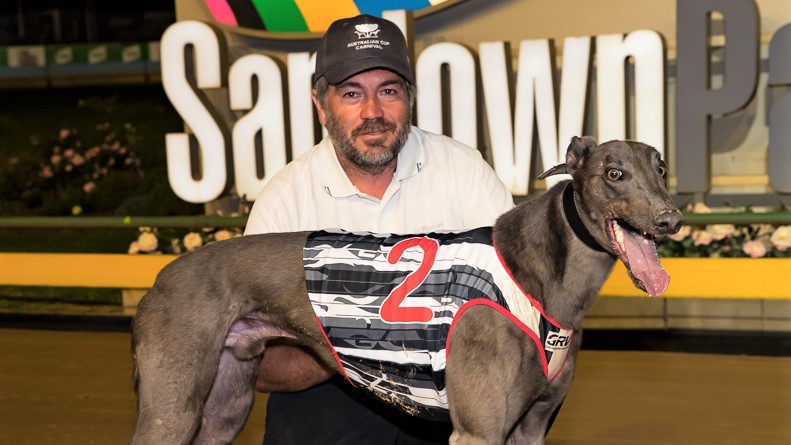 Zipping Rambo announced himself one of the country’s premier middle-distance chasers with a stunning victory at Sandown Park tonight.

In what appeared a very even 595m event, Zipping Rambo nailed the start and was a length clear of the field within a matter of strides. Cha Cha Charlie gallantly stuck with him down the back straight but had no answer as they approached the home turn, Zipping Rambo recording a dominant victory in 33.659.

His winning time was the second fastest ever recorded, just 0.029 seconds outside of Dyna Double One’s longstanding track record.

As exceptional as the overall time was, it was the way he ran it that showed his dominance.

That his first split was elite came as no surprise given he set the first split mark at the Meadows just two starts earlier. However his strength at the end of the 595m trip stunned everyone, except perhaps for his trainer Mark Delbridge.

“I couldn’t be any happier with the win,” he said.

“His run at the Meadows, he was broke the first split record and I reckon he was only about a length off the second split. And that was only first 600m.”

Earlier in the night, Hank The Hustler stormed into RSN Sandown Cup calculations with the fastest 715m run in over 15 months. His 41.38 romp saw him installed the $6 second elect for the $250,000 feature.

Zipping Rambo (2) records the second fastest 595m ever
< Previous
Next >