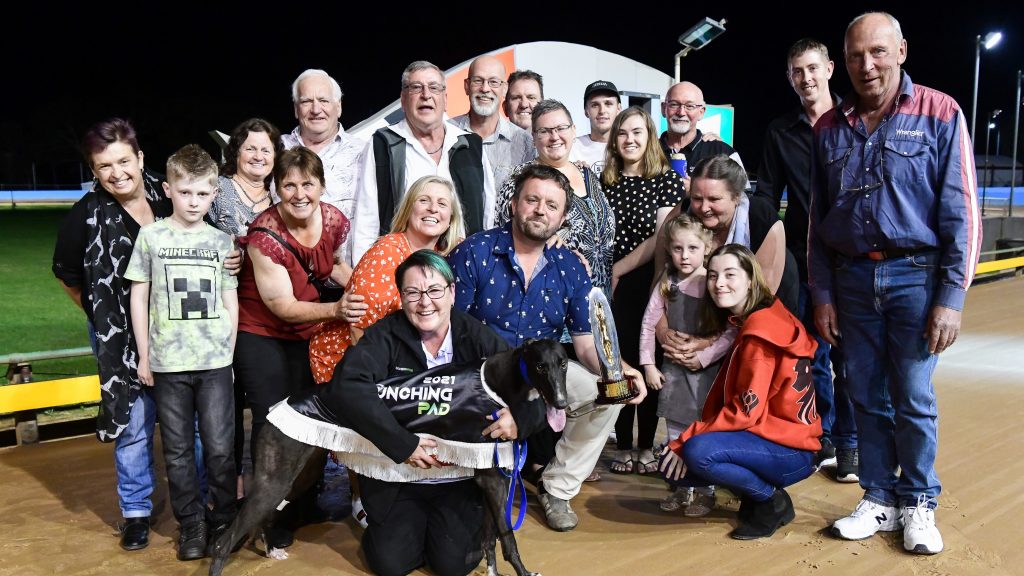 Kuro Kismet was easy in the market despite impressive performances in both his heat and semi-final. But jumping from box 1 – his first career start in the red vest – Kuro Kismet stepped well enough to withstand the pressure from the outside boxes and hold his position through the first turn and hold the lead as his rivals came together. Down the back, Kuro Kismet appeared to have opened a race winning break over Destruction however turning for home, favourite Aston Rupee stormed home to close to within half a length and narrowly miss the $150,000 first prize.

“To have a plan and have it come off, it’s just surreal,” said victorious trainer Matt Clark.

“You don’t expect to win these races. These races, I’ve been in them for the last 12 months, and they’re always hard to win so you always show respect to your opposition. But not very often it comes off this way and it has tonight. So, yeah, I’m very humbled, I’m thrilled.”

The Launching Pad is open to greyhounds with 1-6 wins and no more than 30 starts, so when Kuro Kismet won for the sixth time a month before the Launching Pad heats Clark needed to manage his charge’s preparations strictly on the trial track. Already a grade 3 at Sandown Park, Clark rounded out Kuro Kismet’s preparations at the track ensuring he knew every inch of the View Road circuit.

“I was always confident that he’d jump better this week having the inside rail. He trialled out of red box the last two weeks prior to the series so I was actually happy to draw the inside box.

“Coming down in the car – there was the three of us driving down, Melissa (Mayle, owner), Bianca (his wife) and myself – I said, ‘if he’s in front a length and a half at the winning post the first time like my dad thinks he’ll be, it’s going to be a long way around . And it was. Let me tell you, when he led through the catching pen, I just thought, wow, this is surreal. And I was quite confident that they wouldn’t run him down, but you never won it till you won it. And he did it.”

It was an emotional victory for Clark who, 30 years ago, worked at Sandown Park admiring the deeds of some of the sport’s greats. It was at Sandown Park that his passion for the sport was born so it was fitting that it was there, in front of a large support crew of family and friends, that he achieved his greatest success.

“In the old days we used to set up presentations on the infield. And as a kid you’d watch Highly Blessed and dogs like that and dream that you’d get to that level.

“I always had the dream that I’d get there and look, I got here tonight. It means a lot to myself and it means a lot to Bianca. We work hard and everyone thinks it’s easy, but this is a hard game, mate. Whether you’re at Warragul on a Thursday tier three or you’re here tonight, every race is hard to win. You’ve got to respect your opposition every race. And I respected them greatly tonight. But to pull this off, it’s just amazing. It really is.”

Some of the sport’s brightest stars have progressed through the Launching Pad since adopting the slot race format in 2015, including 16 individual group race winners. With the sport’s premier race for emerging greyhounds now on his trophy cabinet, Clark will look to add a group 1 to Kuro Kismet’s CV.

“He’s really strong this dog and he scares me with his tenacity and his win at all cost attitude. And I just think the sky’s the limit with him, I really do.

“I say training dogs like this is like a choose your own adventure book, you don’t know where you’re going to go each week until it happens. We’ll sit down and talk to the ownership group this week and discuss it.”

Earlier in the night, the unheralded Utah Express claimed the Launching Pad Consolation for Tim Britton, while Blue Tiger took out the Consolation series final for Gavin Bourke. Each set of connections took home $15,000.

In the night’s support feature, the group 3 Easter Gift, the well supported Barooga Smoke blew his rivals away to claim the $15,000 first prize in a brilliant 29.16.