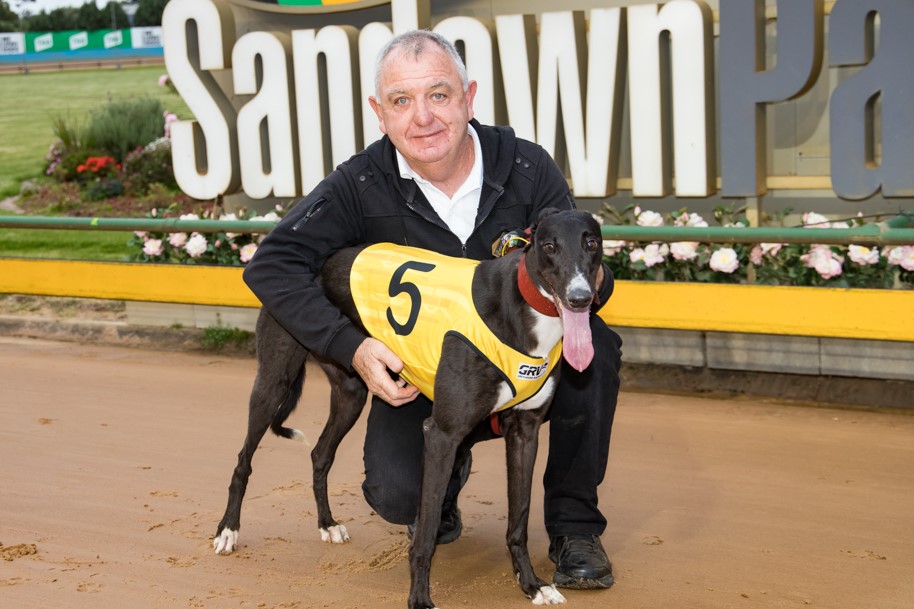 Angel Glow is a greyhound to follow through the upcoming Launching Pad series following her brilliant win at Sandown Park on Thursday night.

The $4 favourite in what was an open maiden final, Angel Glow took full advantage of a clear run from box 5 to lead through the first turn and storm to an impressive five length win in 29.49.

Owned and bred by John and Jane Carruthers of Australian Hall of Famer Rapid Journey fame, Angel Glow was sent to TAB Melbourne Cup winning trainer Paul Bartolo last November however her race preparations were put on hold after coming on season soon after arriving in Little River.

“John rang me and said, ‘I’ve got this nice bitch, I think you’ll do well with her,” said Bartolo.

“So I said, ‘okay, bring her down’ and yeah, she could run a bit. She had two good trials at The Meadows but then came on season.

“We couldn’t do anything about it so I just let her do what she wanted at home. We took our time with her and gave her a bit of extra time off and she’s come back real good.”

She ran 29.60 in her only trial at Sandown Park prior to the maiden series, showing the good early speed that had been the trademark throughout her preparation. However those good box manners deserted her in that first start much to the dismay of connections. Despite the tardy getaway, Angel Glow was still good enough to run away from her rivals and score by 6.5 lengths in 29.74.

“I can’t say what I said (after Angel Glow mistimed the start) – but John said the same!

“The good thing with her is that she hunts up real quick, she has a very good middle section.”

Angel Glow will next join kennelmate Thursday Knight, himself an impressive winner in 29.55 the Thursday prior, in the heats of the Launching Pad qualifying series on Sunday 7 March. The winner of the final will pick up a ticket into the $420,000 Launching Pad series, the heats of which will be run on Thursday 18 March.

“We have one ticket, but we’ll put them both in those qualifying heats and hopefully win another.”

Angel Glow (5) is Launching Pad bound after her impressive all of the way win in 29.49
< Previous
Next >