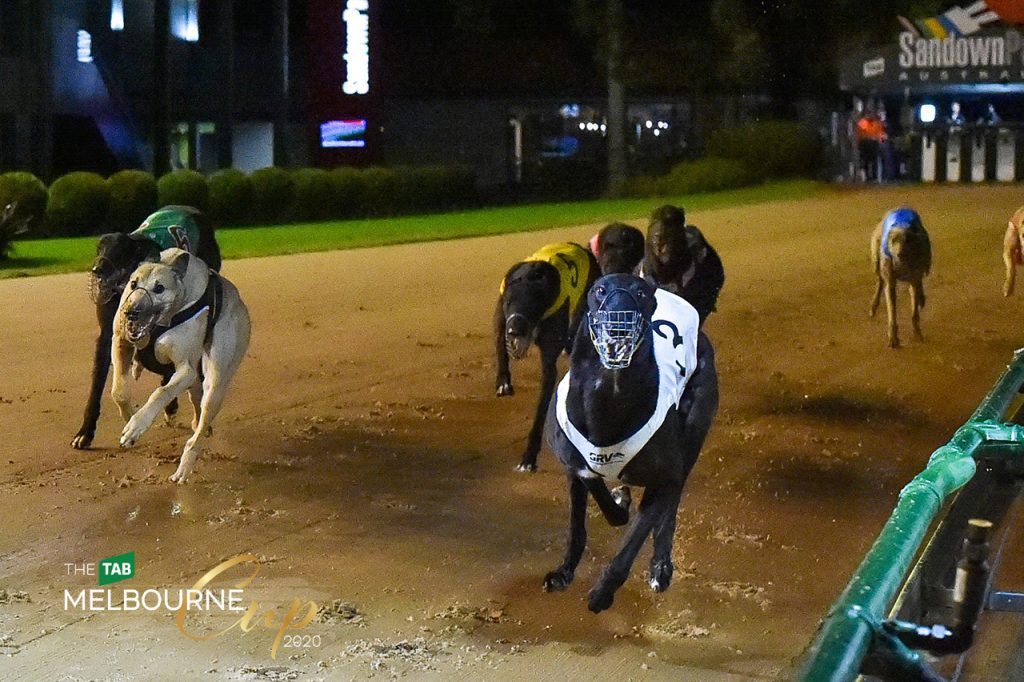 Since running second in a heat behind eventual Cup winner Whiskey Riot in 2019, Simon Told Helen has emerged to become the undisputed top sprinter in Australia, boasting eight group race wins (including four group 1s) and has been runner up on four more occasions. He was installed favourite for the Cup when markets opened in January and has remained the punter’s elect since. His biggest threat appears to be drawn on his immediate outside in Special Talent, who improved sharply across three consecutive Cup Prelude series, as well as Zipping Bram in box 8 who broke the track record in a recent trial.

Shima Shine was a big winner out of the box draw having come up with box 3 in the opening heat. Also a runner up in a Cup heat in 2019, the second fastest greyhound ever at Sandown Park is aiming to become the first greyhound since El Grand Senor to win the Topgun-Melbourne Cup double and should have enough early pace to hold out Warrnambool Cup winner Zambora Smokey.

Tiggerlong Tonk defeated Shima Shine in last week’s Shootout in a race record 29.03 but has draw awkwardly in box 4. However there appears a lack of early speed in a race which also features the well supported Immunity, Wallbanger and Geelong Cup runner up Bobby The Brute.

TAB Million Dollar Chase winner Handsome Prince will become the sport’s highest earning greyhound if successful in the Cup and has drawn well in box 2 in his heat. Bred in Tasmania and raced in New South Wales, Handsome Prince has drawn a tough heat with impressive last start Prelude winners Jax Bale and People Get Ready drawn boxes 6 and 7. Three time TAB Melbourne Cup winning trainer Jason Thompson cited Aussie Secret as the best of his Cup contenders, an opinion that was reinforced after he drew box 1.

Star Western Australian sprinter Tommy Shelby will resume his rivalry with Catch The Thief in heat 6. The pair met twice at Cannington this year with Catch The Thief victorious on both occasions, however he will need to overcome box 6 to progress the final, a box that has only produced three heat winners over the last five years.

Hard Style Rico will be looking to return to the winners list in race heat 7 and has drawn suitably in box 8. Xerri will also be looking to bounce back after a disappointing second in last Thursday’s Preludes, while Mepunga Maggie, another who was placed in a heat of the 2019 series, will aim to capitalise on drawing box 1.

The final Cup heat will see boom pup Dr Tucker continue his quest to become once of the youngest Cup champions in the race’s 65 year history when he jumps from box 8. But he’ll have his work cut out for him with Speed Star winner Christo Bale drawn in box 3, and Music Event – who firmed from $101 to $17 for the Cup following his recent Prelude win – drawn in box 1.

While the sprinters take centre stage, three heats of the group 1 Bold Trease for the stayers will also be run on Friday night.

Greyhound racing’s newest millionaire and defending Bold Trease champion Tornado Tears will line up in the first heat, and has drawn box 1 for just the second time in 44 starts in a full field over the ‘half-mile’. His only other start from box 1 over the stayers trip came on his 715m debut on 5 April 2018 – some 957 days ago – where he ran 41.20, then the second fastest time ever recorded.

Series favourite Houdini Boy will make his long awaited debut over 715m at Sandown Park in the second heat. The mercurial Kel Greenough trained galloper rounded his preparations with the sixth fastest ever 595m run on Sunday and all eyes will be on the clock if he gets room to show his jaw-dropping turn of foot.

The final Bold Trease heat is the most even with established top grade stayers Blazing Cartier, Just Terms and Sunset Bourbski meeting the emerging Manilla Knight coming off a track record at Shepparton last time out.

TAB Melbourne Cup night considered the finest night of greyhound racing of the year and it is not difficult to see why. The runners across the eight TAB Melbourne Cup heats and three Bold Trease heats have combined to win over 1000 races and almost $9.5m in prize money and features no less than 19 group race winners.

The TAB Melbourne Cup and Bold Trease finals will be run on Friday 27th November.

The TAB Melbourne Cup is the final leg of the Victorian Metro Festival of Racing encompassing five nights of group racing across Sandown Park and the Meadows.