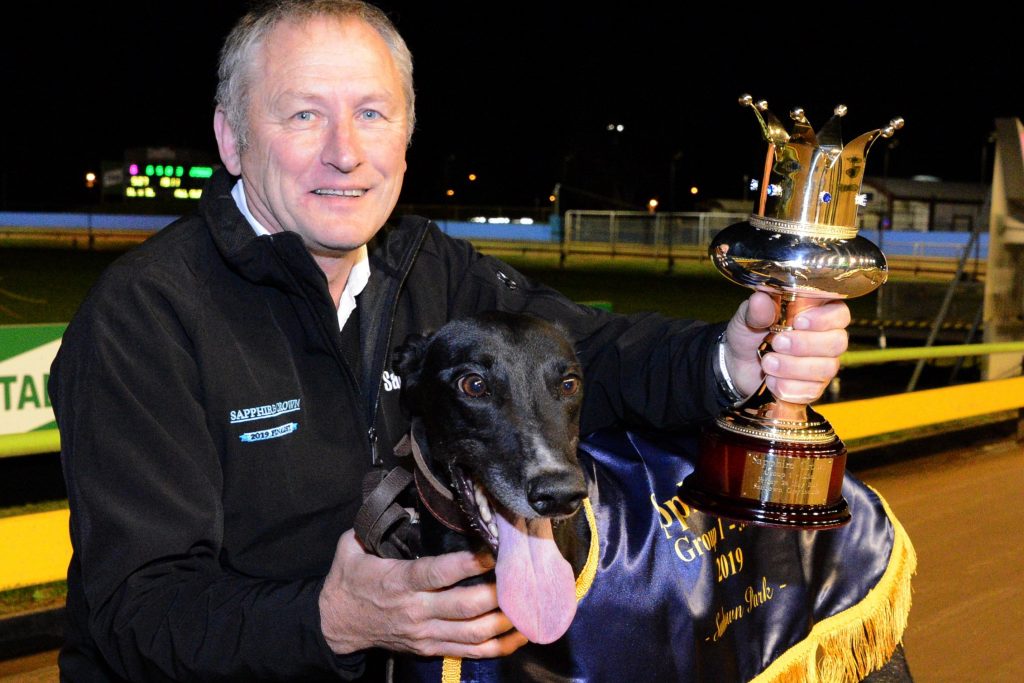 Racing at Sandown Park will be beamed into the United States for the first time on Thursday night, and Robert Britton believes American greyhound racing fans can look forward to the high quality racing from one of Australia’s premier tracks.

Britton has extensive experience racing in both countries. Responsible for some of the best known greyhounds to race in Australia including Fanta Bale and Tornado Tears, Britton also races a number of greyhounds across tracks throughout the United States.

“I have about 14 racing in America at the moment and seven more about to hit the tracks,” he said.

“I have a couple racing in top grade at Wheeling Island but also have greyhounds at Southland, Derby Lane, Palm Beach and Iowa. I try and place them at the tracks they’re best suited.

“I had a couple of dogs (Aussie Trouble and Aussie Stitch) win at Wheeling this week, so I’m happy.”

With success on both sides of the Pacific Ocean, Britton is as well placed as anyone to compare the racing between the two countries. And while both countries race in eight dogs fields on oval track over similar distances, he believes there are subtle differences between the two that make for a different style of racing.

“The tracks in America tend to have longer straights and sharper turns whereas our tracks are more oval with wider, more sweeping turns.

“American dogs will run straighter lines out of the boxes since their starting boxes tend to be in a chute, with box 1 in alignment with the running rail and the lure further in front and more central to the track. Our boxes are a little a further off the track and lure closer to the rail, so our dogs are more prone to turning left at box rise. That can give an advantage to the dogs drawn inside.”

Britton says Palm Beach is the best comparison to Sandown Park in terms of layout, but Southland is the only track that compares when it comes to prize money.

“Both Sandown Park and Palm Beach are speed tracks where early speed is important. About half of all winners over 515m (565y) at Sandown Park lead at the first turn.

“But when it comes to prize money, Southland is the only American track that comes close to the money available at Sandown Park. Every race on a Thursday at Sandown is worth about USD$3700 guaranteed and it’s not dependant on the handle like it is in the US.”

American viewers will see some familiar greyhounds in the form guides for most Australian race meetings. American greyhounds have had a major influence on Australian breeding with number of sires including Kinloch Brae, Bella Infrared, SH Avatar and KC And All all producing winners in Australia. But it’s a son of Kelso’s Fusileer that has had perhaps the biggest impact in Australia, producing arguably the country’s finest sprinter, Fernando Bale. After winning eight group 1 races and almost $1.3m in prize money, he has now become one of the country’s premier sires with his offspring having earned over $33m since he joining the stud ranks in 2017.

Half of the field in Thursday night’s feature race, the $15,000 Gr8 Eight over 595m, is sired by Fernando Bale while Kinloch Brae is also represented by a runner, Sandown Cup winner Rajasthan.

Fanta Bale (3), out of US dam Ucme Typhoon, wins the group 1 Bold Trease to become the third Australian greyhound to win $1m in prize money
< Previous
Next >