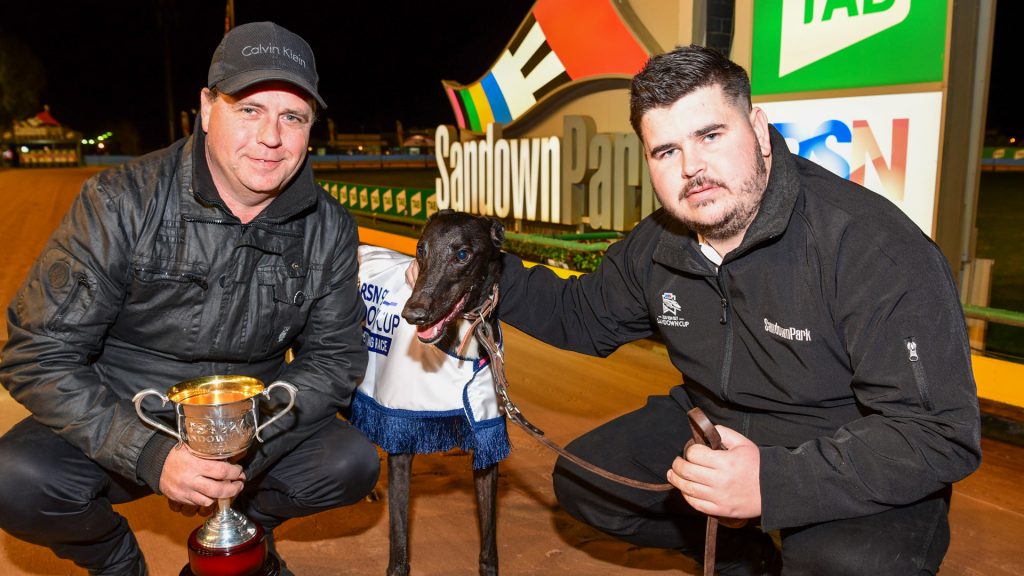 Bronski Beat caused a major upset by clinging on to victory in a thrilling conclusion to the RSN Sandown Cup.

As he did in his heat the week prior, Bronski Beat speared straight to the front and opened a big gap over the field with a lap to go. He maintained that margin down the back straight but began to tire as he swung for home. True Detective bore down hard on the tiring leader and He Shall Power flashed home late, however Bronski Beat had just enough in the tank to cling to a thrilling victory by half a length in 41.86.

The race panned out exactly as trainer Brendan Pursell had hoped, providing him with his first group 1 victory.

“When I went through the field I thought if he could jump the same as he did last week he might be able to get across,” said an elated Pursell.

“If he can get up outside the other dogs at the first turn now he can burn them off. It worked out that way, but I certainly wasn’t expecting it to be honest.”

The punters weren’t expecting the victory either with Bronski Beat attracting just 3% of the support with tab.com.au. His $18.20 starting price was the third blowout result in the five edition of the RSN Sandown Cup following Bells Are Ringin’ in 2016 ($38.40) and Rajasthan in 2019 ($34.20). It also continued Pursell’s remarkable run of well-priced winners. His RSN Sandown Cup victory was his 10th winner at Sandown Park in May, returning an average starting price of $15.10. Pursell wasn’t on Bronski Beat in the RSN Sandown Cup final.

“No, you don’t need to be when you’re running around for good money.

“I’ve had a good run lately. The dogs have been going well and they’ve been getting to the front which good. Most races are won from out in font so that’s where you want to be. “

Bred in Pursell’s home state of Tasmania, Bronski Beat was purchased by Pursell as a three month old pup and was the realisation of long term planning by Pursell.

“Rob Britton used to train the mother (Ainsley Bale) and I used to see what she could do on the trial tracks. She had a real big motor and I always thought when she breeds I might buy a pup out of her. I knew the person that bred her so I rang him and bought the pup when he was three months of age.

“We broke him in ourselves and did the whole lot with him. Everyone knows how hard it is, so to get one to win a race like this, it’s pretty special.”

While crowds continue to be prohibited at the track, Pursell was delighted to be able to share the victory with his son, Blake, who handled Bronski Beat in the final.

Earlier in the night, the country’s top ranked sprinter Simon Told Helen won for the third time in three weeks at Sandown Park, holding off Tiggerlong Tonk and Mepunga Pegasus in a blanket finish of the Gr8 Eight event.