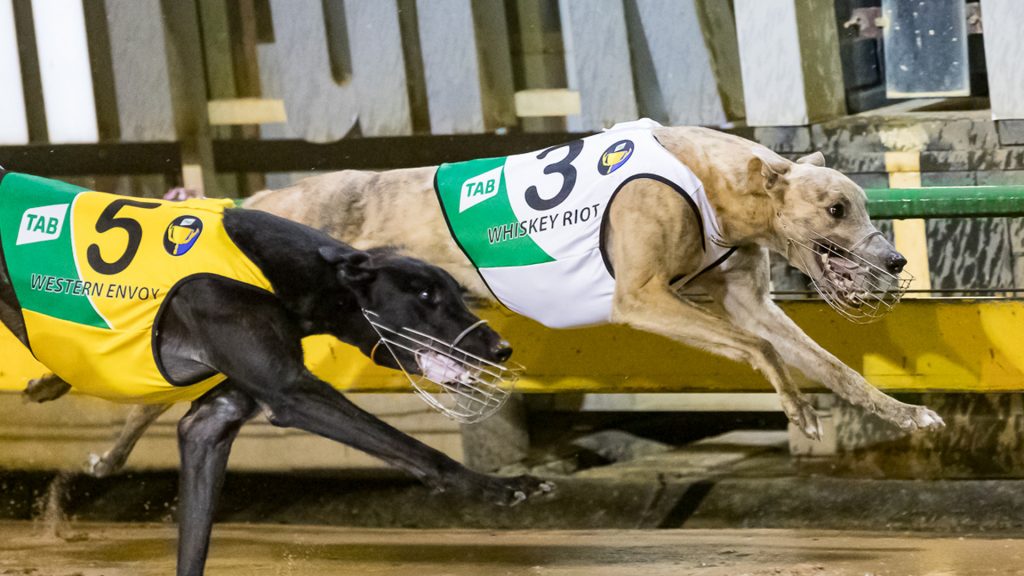 
Anthony Azzopardi experienced the greatest moment of his training career when Whiskey Riot scored a courageous victory in the TAB Melbourne Cup on Friday night.

Whiskey Riot stepped well from box 3 – a box from which no greyhound had won the Cup since 1995 – and led the field through the first turn with Western Envoy camped on his outer.

The pair went stride for stride down the back straight before Western Envoy inched his way in front and looked the winner turning for home, however Whiskey Riot responded again, pulling out all of his reserves to drive through and take the victory by a head in 29.44.

“Since I was a kid I’ve watched this race and watched the trainers behind the boxes get interviewed and now I know how they feel. It’s just a feeling you can’t describe, it’s unbelievable.”

Whiskey Riot – ‘Red’ as he’s known at home – had twice been nabbed on the line in group race finals previously, and despite a nervous few moments while judges confirmed the numbers, Azzopardi was confident his charge had finally broken through at the sport’s highest level.

“I had a feeling he got the photo but being your own dog you might see a little more than others, but when the number came up I didn’t know what to do.

“It’s something I’ve dreamed of and worked hard for. This is the race that I’ve wanted to win my entire life.”

Azzopardi dedicated the victory to his late father who introduced him to the sport of greyhound racing, and to his entire family many of whom travelled from New South Wales to be there.

“I wish he was here but I know he’ll be watching down. My mum at home in Sydney, my missus Kylee, my daughter Kayla – it’s a whole family thing, a team thing.”

For owner Sandra Camden-Bermingham and her husband Colin, the win continues a remarkable run of success. Just over 12 months earlier, Whiskey Riot’s half-sister Mystic Riot took out the TAB Million Dollar Chase and their dam Ready To Riot’s progeny now combing to win over $2m in prize money.

“We are over the moon! My husband and I are thrilled beyond belief, this is a dream come true. We’re so excited, it’s really amazing we just couldn’t be happier,” said Sandra.

“When that number showed up we were screaming like crazy people. We’re so happy and so thrilled to be here.”

Race favourite and track record holder Hooked On Scotch flew home for third beaten half a length, while ranked outside Oakvale Beauty was the unlucky runner in the race finishing fourth just a length from the winner.

Later in the evening, Tornado Tears reminded everyone that you should never write off a champion, winning his fifth group 1 title in the Bold Trease.

Tornado Tears stepped cleanly from box 4 but was soon shuffled back beyond midfield as reigning RSN Sandown Cup winner Rajasthan assumed control of the race. He improved to third position with a lap to go and loomed ominously behind the leaders down the back straight.

To the delight of his legion of fans, ‘Batman’ drove through a split when it presented and quickly put paid to the race, racing to a 2½ length victory in 41.86.

The win improved his superlative record over the Sandown Park 715m journey to 10 wins from 11 starts including three group 1s. Despite that record, Tornado Tears did not start favourite for the race, the first time that had occurred in 40 starts dating back to March 2018.

“A lot of the punters weren’t too happy the last few weeks but if they buttered up and kept going the odds tonight were pretty good,” said his relieved trainer Robert Britton.

“I thought he was over the odds. All things being equal I thought he was the best dog in the race, and I don’t say that bragging, I think he is. But if you go off your last few runs and they weren’t that great.”

It was Britton’s third consecutive victory in the Bold Trease after Fanta Bale’s success in 2017 and Barcali in 2018. The $105,000 took Tornado Tears’ career prize money to $884,120 and past Up Hill Jill into seventh place on the all-time prize money list.

In the first ever Cup Night Speed Star match race, Sennachie reminded all why he is the top ranked greyhound in the country with a thrilling victory over Feral Franky.

The highly anticipated clash between the two superbly matched and extremely popular sprinters delivered as promised. Sennachie broke quickly from the outside box before Feral Franky pegged him back. But it was Sennachie that proved too good on the night, saluting by 1¼ lengths in 29.260.

TAB Melbourne Cup night is greyhound racing’s showcase evening, including nine feature events and over $1,000,000 in prize money. Here’s who won the other feature events: