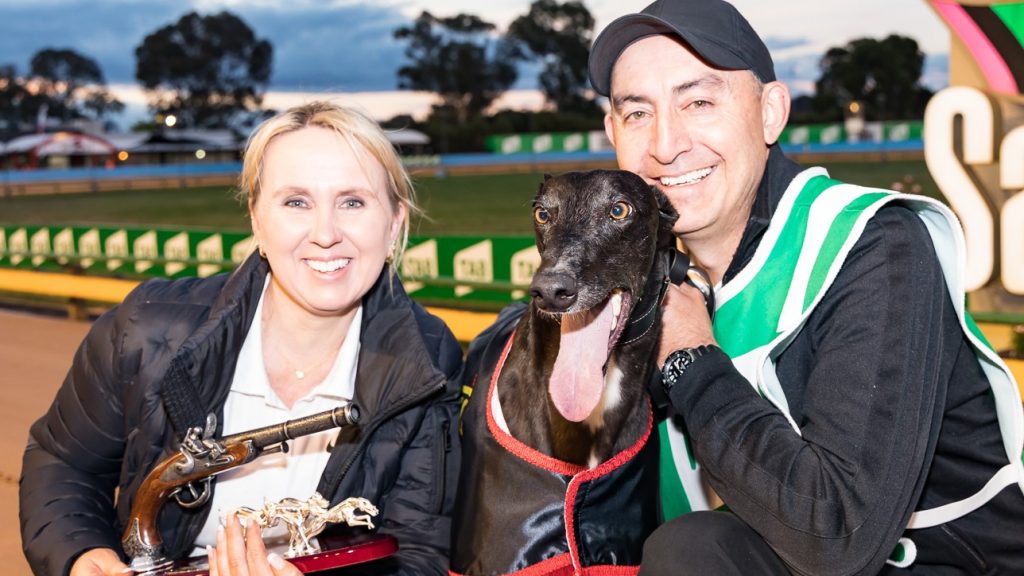 
It took until the final stride, but Hooked On Scotch landed the $25,000 prize in a classic edition of the Shootout at Sandown Park last night.

Whiskey Riot was widely touted to lead the four dog event and he did just that after beginning brilliantly from box 1. Hooked On Scotch settled in second place and loomed ominously down the back straight before unleashing the powerful finish for which he has become famous, nabbing his rival in the final strides to record a memorable victory in a slick 29.162.

“For a young dog it was a real professional win,” said his delighted trainer Jason Thompson.

“It’s very hard to win these races when you’re not leading. When you’re chasing quality dogs like Whiskey Riot that can run 29.20 every time he goes around here, he makes you work the whole way.”

A veteran of just 14 starts, Hooked On Scotch has now won four group races having previously annexed the group 3 Speed Star, group 1 Adelaide Cup and group 2 Geelong Cup, and has amassed over $168,000 in prize money. He’ll enter next Friday night’s TAB Melbourne Cup heats among the favourites to claim the world’s greatest greyhound race. Thompson was bullish about his chances against the best chasers in the country.

“The pleasing thing tonight was that he even though he didn’t ping out of the boxes, it was good to see him drive through. He had to assert himself through the first corner and it was really pleasing to see him do that because when he was younger and more inexperienced he was probably a bit intimidated at times by other dogs. But tonight he was deadest focused on pushing through and holding his ground and that’s what’s won him the race.

“He’s not even 23 months old yet. He’s won four group races, he’s pretty much won everything we’ve put him in once he’s gotten out of maiden grade. To do what he’s doing and racing like a professional… I’m very happy coming in to next week.”

Hooked On Scotch is the fourth Shootout winner to be prepared out of the Thompson’s Awesome Lodge property, with Jason having previously prepared Whisky Assassin (2004) and Priven Nitro (2012) to Shootout success, while his wife Seona also won the race with Aston Dee Bee (2018).

For Whisky Riot, it was the second time Hooked On Scotch denied him a maiden group race victory having also being caught in similar fashion in the Adelaide Cup. However trainer Anthony Azzopardi was delighted with the effort of his charge and is equally looking forward to next week’s Cup heats.

“He did everything that he was meant to do,” he said.

“He ran the sections, he ran the time he can run. He came out here and produced his best and that’s all I can ask for. Now we go into 8 dog fields and that’s what suits him.”

Whisky Riot’s 29.221 gallop was the second fastest time recorded on the night with his 5.04 first split the third fastest. His price for the TAB Melbourne Cup was trimmed from $31 to $21 following his performance.

The final round of TAB Melbourne Cup Preludes were also run with Flynn, Blue Striker, Reiko Boss, Busy Bella and Weblec Ace all winning and guaranteeing their place in the Cup heats, while Shima Shine and Who Told Stevie will join Hooked On Scotch as series favourites after claimed their second Prelude victories.