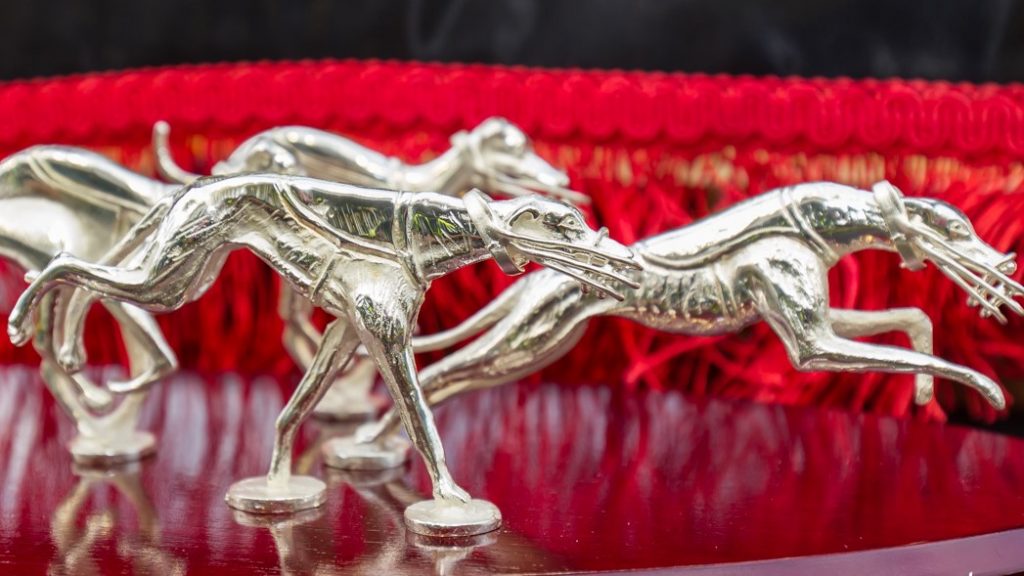 
Hooked On Scotch is a confirmed starter in next Thursday’s Shootout, but who will take on the dog dubbed ‘the fastest greyhound in Australia’?

That’s the $25,000 winner-takes-all question ahead of the 11am Monday nomination closing time. The race is open to ‘best four dogs suited to the format’, which is to say they have to be fast. Very fast in fact – the fastest of the fast.

Group race form is nice, but this is a speed race and times are king. Being at Sandown Park, times at headquarters are weighted heavily though fast times elsewhere can tip the equation. Speed Star and exhibition trials matter too.

Hooked On Scotch is an automatic selection by virtue of winning the State Of Origin series in South Australia, though in truth he’d be an automatic ‘in’ even if he didn’t. His brilliant 29.113 win torrential rain in the September Speed Star was as impressive a gallop you’d see. Based on times across the card we estimated times were off around four lengths which, if applied to Hooked On Scotch’s run, equates to the track record being annihilated. Whether you agree he would have broken Unlawful Entry’s mark makes for a fascinating discussion, but for the purposes of this article it’s a moot point – he’s in regardless.

So who else can we expect to see in ‘the Speed Championship of Australia’? This is by no means an official list nor are any of these dogs actually nominated. But here’s a look at some of the contenders – plus a few wildcards. Let us know who you’d like to see in the Shootout final via our Facebook and Twitter.

Remember, all runners Shootout runners are automatically exempt into the TAB Melbourne Cup heats too.

Feral Franky
Trainer: Ray ‘Jack’ Smith
Race record: 36 starts 21-8-3
Prize money: $367,660
Sandown best: 29.075
Other notable times: Wentworth Park 29.57, Gunnedah 29.68 (TR), Dubbo 29.21 (trial, TR)
Comment: Met Hooked On Scotch in one of the most keenly contested FFA’s of the year in his last Sandown start. While Hooked On Scotch found trouble early, ‘The Feral’ was off and gone running 29.075. It was the fastest time run outside of the Speed Star in almost 12 months and has run some scintillating trial times making him the ideal contender for Hooked On Scotch’s crown.
WATCH | Feral Franky wins a FFA in 29.075

Sennachie
Trainer: Steve White
Race Record: 27 starts 15-5-3
Prize money: $520,500
Sandown best: 29.245 (Speed Star trial)
Other notable times: Albion Park 29.38 (TR), The Meadows 29.53, Angle Park 29.21
Comment: While trainer Steve White has indicated previously that Sennachie is a doubtful starter (the plan from a long way out was to go straight from the Topgun to the Speed Star), the dual group 1 winner would make a fascinating addition to the race. He has excellent speed from box rise which the others can lack and would certainly give them something to chase.
WATCH | Sennachie sets the Albion Park track record

Shima Shine
Trainer: Andrea Dailly
Race record: 13 starts 10-1-1
Prize money: $145,225
Sandown best: 29.202
Other notable times: Wentworth Park 29.60, Ballarat 24.75 (TR)
Comment: There is no shortage of hype around this boom pup and there’s little wonder why. He broke Over Limit’s Ballarat track record at his 7th career start and ran second after starting favourite in the TAB Million Dollar Chase at his 12th. In his first look at HQ in a TAB Melbourne Cup Prelude, he set tongues wagging by going 4.96 to the first mark on his way to 29.202. Would be a big ask for a greyhound yet to turn two to win the Shootout against greyhound of this ability, especially with the volume of racing he’s had so far. But then, he has answered evert challenge set for him so far so why couldn’t he answer it again here?
WATCH | Shima Shine breaks Ballarat track record

Good Odds Harada
Trainer: Frank Hurst
Race record: 43 starts 20-12-7
Prize money: $1,144,035
Sandown best: Never been here
Other notable times: Wentworth Park 29.34, Bathurst 29.30 (TR)
Comment: Feral Franky’s brother and winner of the Million Dollar Chase. Hasn’t been to HQ before but shouldn’t matter – anyone that followed him through the MDC knows how good he is. He is yet to qualify for the TAB Melbourne Cup, so has to either win the TAB Topgun, or line up in the Shootout, or contest a TAB Melbourne Cup Prelude on Shootout night.
WATCH | Good Odds Harada wins the Million Dollar Chase

Pindari Express
Trainer: Tracey Scruse
Race record: 28 starts 16-7-1
Prize money: $92,040
Sandown best: 29.507
Other notable times: Bulli 26.07
Comment: Widely regarded one of the fastest greyhounds in racing, but his best performances have been confined to the big one-turn tracks. That said, he did make the Million Dollar Chase, and trainer Tracey Scruse has been eyeing the Shootout for some time. Made his Sandown Park debut at Sandown Park on Monday, overcoming trouble to storm home and win in 29.507
WATCH | Pindari Express wins on his Sandown Park debut

Who Told Stevie
Trainer: David Burnett
Race record: 8 starts 6-1-0
Prize money: $38,535
Sandown best: 29.114
Other notable times: The Meadows 29.65
Comment: Franked his excellent form through the Great Chase series with a stunning win in a TAB Melbourne Cup Prelude running 29.114. The punters haven’t missed – he’s started favourite in seven of his eight career starts and has been one of the best backed greyhounds in the TAB Melbourne Cup pre-nominations market. On last week’s effort, it’s easy to see why.
WATCH | Who Told Stevie’s 29.114 win in a TAB Melbourne Cup Prelude

Simon Told Helen
Trainer: David Burnett
Race record: 8 starts 5-2-0
Prize money: $79,365
Sandown best: 29.448
Other notable times: The Meadows 29.73
Comment: Trainer David Burnett believes nothing separates Simon Told Helen and Who Told Stevie. Unlike his littermate, Simon Told Helen is yet to qualify for the TAB Melbourne Cup heats, so maybe he’s the more likely of the two to nominate? Was nabbed on the line last start in the group 3 Silver Bullet at The Meadows.
WATCH | Simon Told Helen wins the Great Chase

Ok, there’s a few from left field on this list. But any one would certainly add a bit of intrigue. And everyone of these greyhounds will be suited by the format, and are capable of seriously fast times so why not?

Sweet As Emm
Trainer: Brendan Pursell
Is she a sprinter or a stayer? Certainly profiles as a Shootout type dog as seen in the September Speed Star.

Razor’s Edge
Trainer: Ros Hume
Has run some amazing times in trials and on the race track – when he gets space. Ran second to Sweet As Emm in September’s Speed Star consolation.

Embye
Trainer: Ruth Matic
After a long layoff, returned with a stunning 29.40 at Wentworth Park. Draw a line through the MDC series, that’s certainly quick enough for consideration.

Tornado Tears
Trainer: Robert Britton
The undisputed fastest greyhound over 595m and 715m, could he be over 515m too? Hasn’t raced over the sprint trip since March 2018, but did run 29.26 in a 515m trial in August 2018. Will certainly appreciate the early room!

Bago Bye Bye
Trainer: Darren Russell
Has been trialling the house down at Albion Park. Is a group 1 winner and track record holder over the sprint in NZ.

Flynn
Trainer: Jason Thompson
Remember him? Flynn won the Speed Star in May, now in a new kennel and needs to qualify for the TAB Melbourne Cup heats.

Get It Gizmo
Trainer: Harry Manolitsis
A 29.25 at the Gardens and 29.45 at Wentworth Park says he’ll hold his own.

Nominations for the Shootout close at 11am on Monday 11 November and will be released, along with the fields for the final TAB Melbourne Cup Prelude series, soon after.