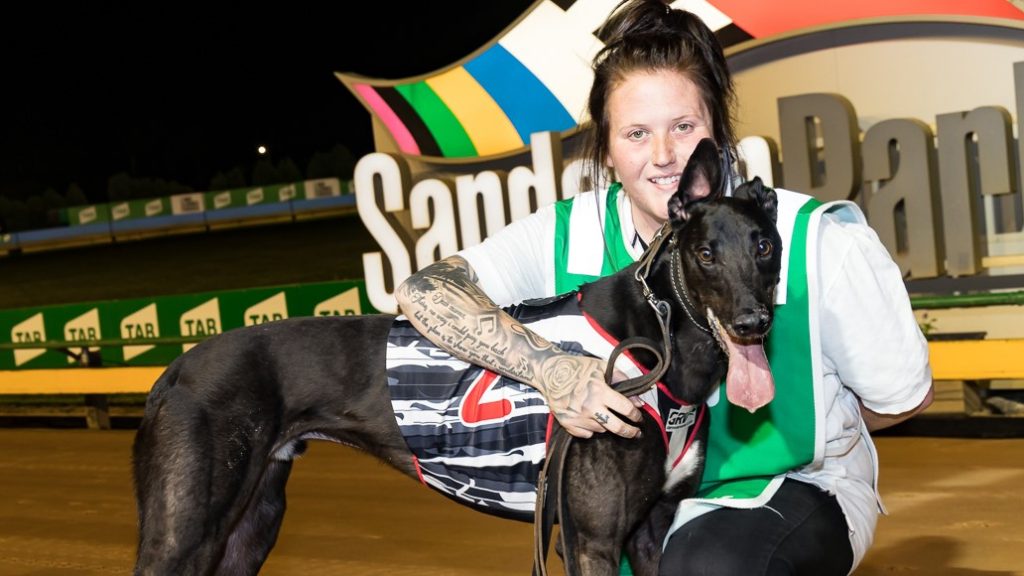 
Fast times were the order of the night with five exciting youngsters punching their tickets to the TAB Melbourne Cup heats at Sandown Park last night.

Leon Bale, Mepunga Maggie, Who Told Stevie and Sweet As Emm and Shima Shine (pictured above with handler Korie-Lee Heinrich) capitalised on the perfect conditions presented, not only winning their respective TAB Melbourne Cup heats, but running times that heightened their Cup credentials.

The winner of each Prelude is guaranteed a berth in the TAB Melbourne Cup heats on Friday 22 November, and the Preludes have proven a reliable form through the Cup series.

Here’s what the winning connections had to say following their Prelude win.

“I thought he had a good chance. The whole litter are all phenomenal dogs, but they just seem to lack a bit of pace” – handler Jake Loverso.

“She’s been doing brilliant. To get a win like that in that sort of time is real good. She still has time on her side so hopefully she keeps going forward” – handler Craig Solkhon.

“I always knew he’d run in the low 29s, but he had never ever raced or trialled at the track so to see what he’s run tonight I’m just blown away. I’m looking forward to the next few weeks” – owner David Gleeson.

“I’m rapt for the owners and rapt for the dog. Everybody knows what he can do now – he’s been showing me that for months – it’s just exciting to see him run those times at his eighth race start. To think he can win a Melbourne Cup at start 10 is pie in the sky stuff but he’s got the chance with those times” – trainer David Burnett.

“The inside draw helps her, I don’t think it matters what race she’s in if she can get a run like that they’re going to know she’s in the race cos she’s very strong” – trainer Brendan Pursell.

Australia’s most popular greyhound Feral Franky prevailed in the night’s Free For All, defeating Hooked On Scotch by 8 lengths in a stunning 29.075.

Despite a modest getaway, Feral Franky railed strongly to storm to a commanding victory, slashing his TAB Melbourne Cup price form $14 to $9.

For more information on the TAB Melbourne Cup, visit www.tabmelbournecup.com.au.