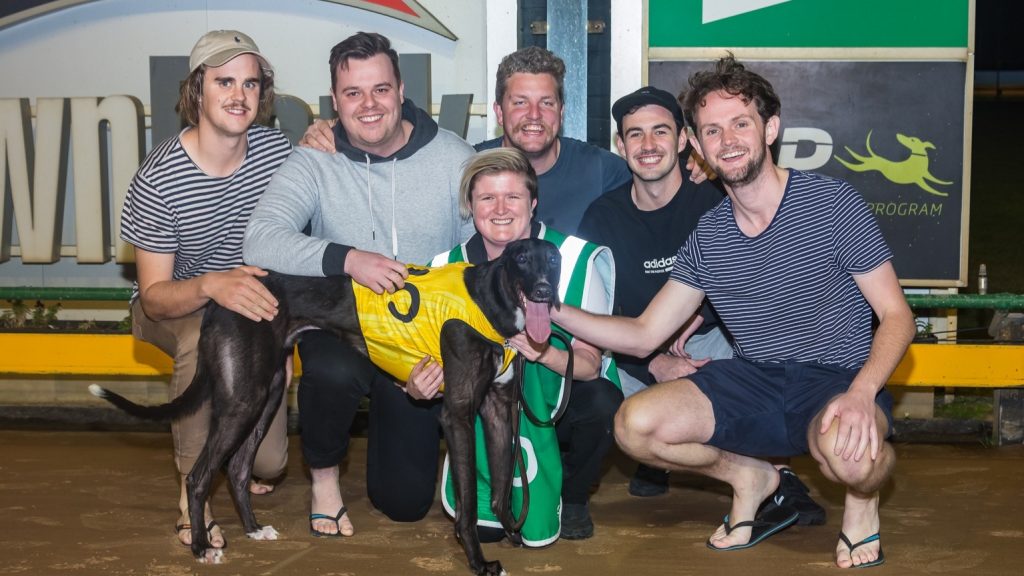 The Wild Boar Racing Syndicate experienced their greatest success in the sport when they won their first city race on Thursday night.

It was courtesy of Corbett, or Major as he’s known at home, who took out the final race on the card. Syndicate manager Corey Smith said the moment was like no other for the crew.

“It’s absolutely insane! Every single one of us involved cheer them on just as hard whether it’s a race for city prizemoney or a half stakes race, but to get a win at Sandown Park is beyond our wildest dreams,” said Smith.

The syndicate is made up of a large group of people with varying backgrounds, but one thing is consistent and that is they all have a love for greyhounds.

“It’s possibly the strangest syndicate that’s ever been put together. It’s made up of family members, Uni mates, a couple of blokes that we met through Twitter and a couple of grandparents. We are all in it for the love of the dogs. It’s a good way to keep in touch and a great excuse for a celebratory beer. The age range is from early 20s to mid 80s, from first time owners to people who have been involved for decades.”

Corbett was purchased at a young age by the syndicate from highly respected South Australian participants Cameron and Yvonne Butcher.

“We were on the lookout to buy a greyhound or two just for a bit of fun, an opportunity came up to buy Major (Corbett) and his litter brother Sarge (Eye Catcher). They’d both had about 5 starts and were only 19 months old when we purchased them. Yvonne and Cameron did such a magnificent job raising them – they’re beautiful dogs.”

“I’ve known Jess since I was a kid – her family used to rear dogs for my old man when he bred a couple of litters about 12 years ago. I hadn’t seen or spoken to her for years but when we first toyed with the idea of getting into greyhound ownership with a group of mates at Uni, I knew how much she valued the welfare of the dogs and it was a no brainer to get back in touch with her.

“In all honesty, we wouldn’t have had the success without Jess. She does a phenomenal job with the dogs and goes over and beyond the job description for a greyhound trainer. We are constantly getting video/picture updates with clips of the dogs eating soft serves after races – it’s a big highlight for the crew involved.”

Earlier in the night Broken Promise produced the most impressive performance of TAB Melbourne Cup Prelude Series 1 – click here for a wrap.

How good this!!!
Some of Corbett owners cheering him home at @sandowndogs last night.
🥰🥰 pic.twitter.com/WwbRlATcL1