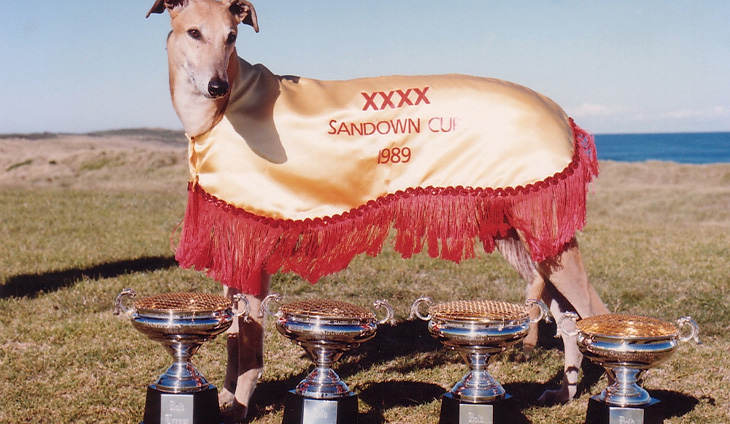 Some time in 1984, Norm McCullagh contemplated greyhound racing’s version of pick-a-box. It’s a familiar scenario, for both dog and greyhound purchasers; a litter of pups, pick the one you like.

McCullagh was presented with a litter of about 10. They were all nicely bred, by Roy Trease out of Irish Temptress, and a little fawn fellow caught his eye.

“He was a good type I guess,” McCullagh recalled today of the day he plucked one pup from his brothers and sisters, the first chapter in the remarkable story of Bold Trease.

Thirty years ago, Bold Trease won his fourth-straight Sandown Cup, a race that would prove the central pillar in arguably the greatest greyhound career of all-time.

A story on the nightly news after Bold Trease won his fourth Cup described him as “greyhound racing’s Phar Lap.”

Bold Trease won 51 races and was an enduring champion, racing until he was six. He retired shortly after failing in his bid to win a fifth-straight Sandown Cup. He ran a luckless third in a heat “and could have won the final had he got in,” McCullagh said.

Bold Trease had overcome two broken legs to become its most famous competitor but he couldn’t beat cancer and died a year or so after he was retired, following the unfortunate amputation of a leg.

Greyhound racing does not pause, even to bask in the career of one of its greats. The lure keeps whirring and in the three decades since Bold Trease ran amok all-around Australia, McCullagh has had a “few handy ones.”

“You only get one really good one once in your life though,” he said. “And I had a pretty outstanding one.”

The sport keeps moving. Encouragingly, newbies are being seduced by it, first-timers hoping the next one plucked from a basket full of pups might be the next great one.

Jacob Rhode had worked with McCullagh for some time and had always been around greyhounds but his mates from the Timboon footy club, including two sets of brothers, had never raced one.

But they were keen and about 15 months ago Rhode and McCullagh were again presented with a big litter and a choice.

It was originally a litter of eight but six had been snapped up and two little bitches remained. One, like Bold Trease, was fawn.

The one they didn’t choose became the smart Delta Rhode, already a winner of about $20,000 and the one they plucked, Crimson Vixen, has become a star.

She has won nine of her 16 starts and is among the favourites for Friday night’s Sapphire Crown, run the same night as the Sandown Cup, the race McCullagh and Bold Trease owned for almost half a decade.

For Rhode’s young mates, the “Mingo’s Mates” syndicate, Crimson Vixen has become a lifestyle revelation. “There must have been 49 of them the night she ran (third) in the Warrnambool Cup,” McCullagh said.

About 10 will be at Sandown on Friday.

“They absolutely love it and they’re all well aware of the legend of Norm and Bold Trease,” Rhode sad.

“Wherever you go with Norm people are pulling him up and asking about Bold Trease.”

Thirty years on, Bold Trease’s presence will be felt strongly at Sandown on Friday night. There will be photos on walls, punters with cherished memories, a likely video tribute to his Sandown Cup four-peat – and Norm himself will be there.

He will have another fawn greyhound with him, a good but not great one, and a group of fellas from Timboon young enough to dream they might one day have that fluky one in the litter who becomes a champion.

The Sapphire Crown is one of three group 1 features at Sandown Park on Friday night. As well as the Sapphire Crown’s companion series the Harrison-Dawson (for male sprinters), the country’s premier stayers will line up in the $250,000 group 1 RSN Sandown Cup – the world’s richest race for stayers – in which glamour greyhound Tornado Tears is the odds-on favourite to defend his title. 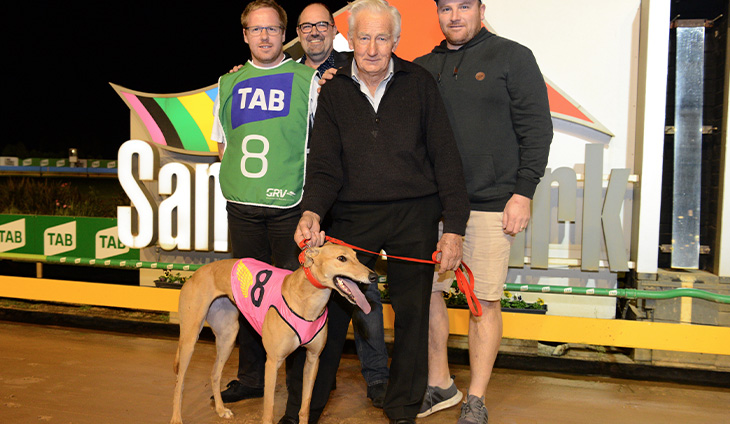