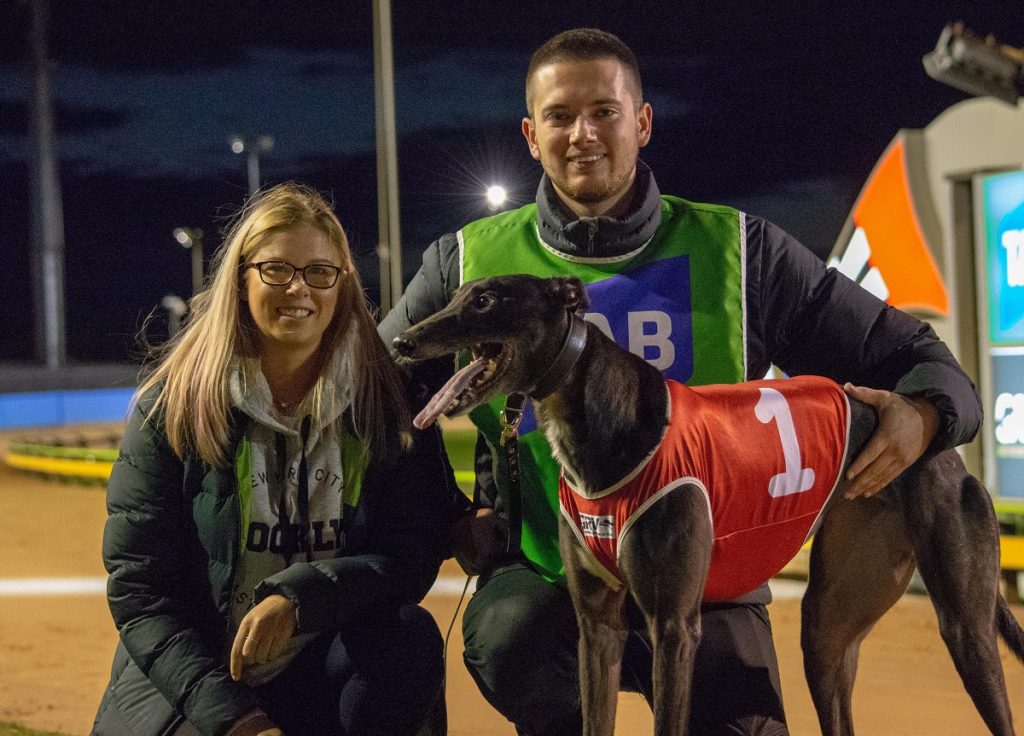 
Rookie trainer Brad Greenough is hoping to wrap up a memorable 2018 when Often Imitated lines up jumps in the $72,500 group 2 Laurels final on Thursday night.

The 21 year old (pictured above with girlfriend Chelbe) has enjoyed a whirlwind nine months since training his first winner with his first starter in March. He has recorded 13 wins and boasts a 40% winning strike rate from his team of three chasers, and Often Imitated has been installed an even money favourite to give him his first group race victory.

Often Imitated’s progression to the time honoured final has been unusual. Torrential rain during last Sunday’s meeting meant that just one semi-final was able to be run, with a ballot required to determine the remaining places in the field. Often Imitated was one of five greyhounds to progress via the ballot.

“It’s a bit unusual, we were lucky to get drawn in the race let alone to get the red,” said Greenough.

Often Imitated, a litter sister to three time group race winner Aston Kimetto, has won eight of her 15 career starts with seven of those victories coming from nine appearances at Sandown Park. She is undefeated in three starts from the cherry at the View Road circuit, but missed the opportunity to improve on that record when she had to be scratched from a heat of the TAB Melbourne Cup due to an infection in her kidney.

“It was devastating. Her record from the red speaks for itself, and she loves the red at Sandown.

“I think she was in with a good chance (in her Cup heat). It just struck at a terrible time and there was nothing we could do about it, we just had to stop and fix it.

“We got some blood tests done and the results told us everything. We ran drips through her to get her fluids back up and flushed out her kidneys but she’s good to go now.

Often Imitated won her heat of the Laurels by eight lengths in an impressive 29.41 – her first start in six weeks following the infection – and will have had 11 days between runs when she lines up on Thursday. Despite her light lead up, Greenough is confident his charge will be fit and firing in Thursday’s final.

“A run on Sunday definitely would have helped her, but we gave her a run up the straight on Monday but will keep her nice and fresh for Thursday and hopefully she can jump and have a bit of luck.”

The group 2 Laurels is the highlight of an excellent card of racing on Thursday night, which also features an outstanding Free For All which includes the brilliant Poke The Bear and fellow TAB Melbourne Cup finalist Degani, last start group 1 winner Hasten Slowly, and the brilliant Miss Splendamiro.

Paw note: After Shima Breeze, Circle Of Dreams and Flowing ran in the first three in the first Laurels semi-final last Sunday, stewards conducted a random ballot of Laurels Semi Final 2 and 3 in accordance with GAR 57(2)(b) and GAR 57(2)(c) to determine the remaining 5 greyhounds and first reserve. The successful greyhounds were Valencia Gem, Often Imitated, Flossing, Sweet As Emm, Shoot To Miss and first reserve Grace Ali.